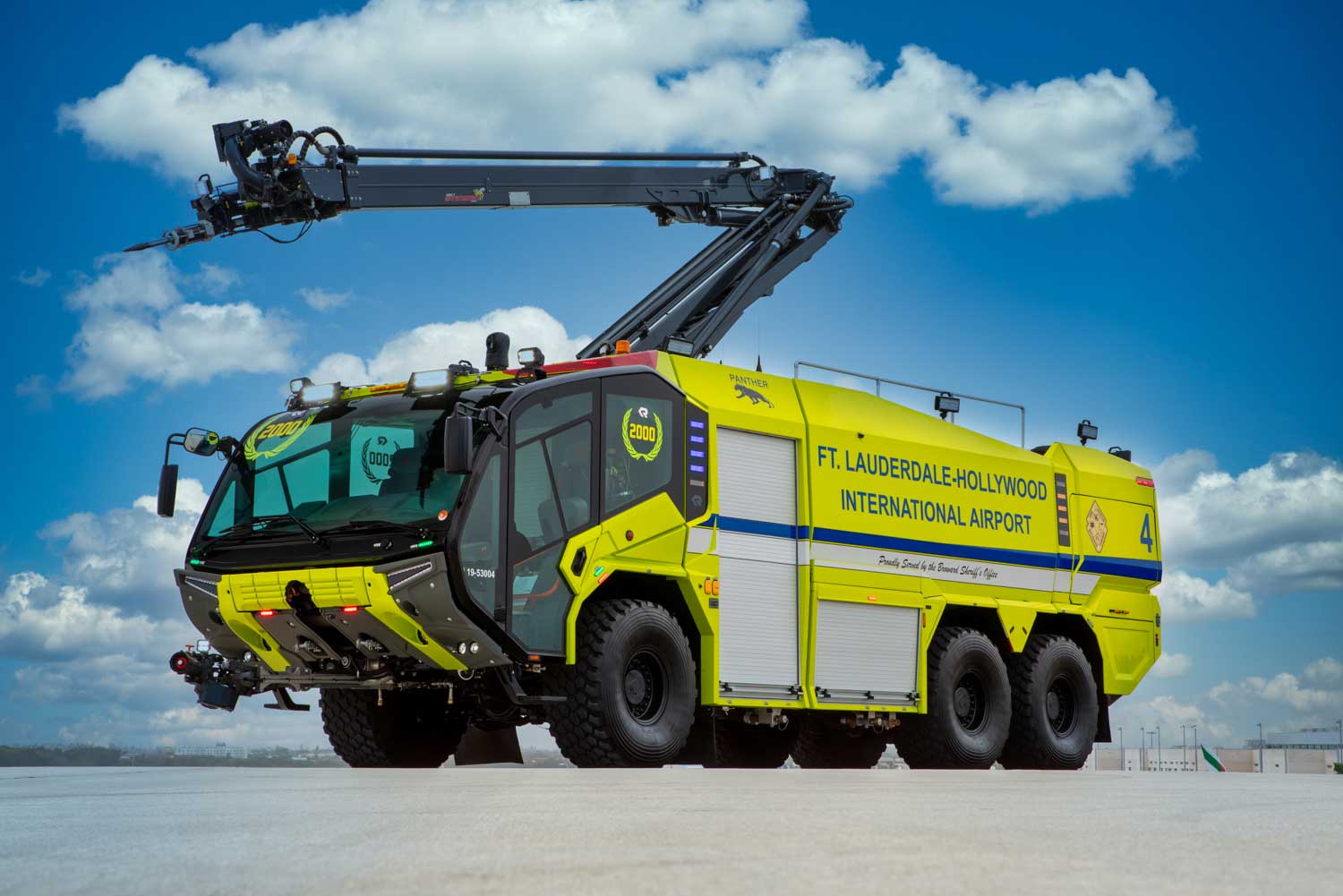 Two brand new Rosenbauer PANTHER 6×6 HRET aircraft rescue and firefighting (ARFF) vehicles were put into service on January 13 at the Broward County, Florida, Fort Lauderdale-Hollywood International Airport (FLL) in an event featuring a traditional push-back ceremony. In the future, these vehicles will act as the flagships of the airport fire brigade. The performance, safety, and ergonomics of the high-end devices exceed the NFPA and FAA requirements.

The PANTHER is the premier class among Rosenbauer fire engines, an ARFF vehicle with outstanding performance values executed with a breathtaking design. The PANTHER 6×6, which is the variant in use at FLL, is powered by a 700-hp Volvo Penta D-16 engine (Tier IV final), which accelerates the 39-ton vehicle from 0 to 50 mph in less than 34 seconds and allows it to achieve a top speed of 72 mph. The all-wheel chassis, together with a low center of gravity and its proven rigid axle system, give the PANTHER stability and safe driving characteristics. The crew is optimally protected during the drive by the certified cabin, which is crash-tested according to ECE R29-3 requirements.

The extinguishing technology is at the heart of the PANTHER and has been the core competence of the Rosenbauer Group for more than a century. The vehicles for FLL provide a system output of 2,100 gpm, whereby the water and foam admixture can be simultaneously discharged. The fully integrated extinguishing technology includes two high-performance turrets, one of which is mounted on the extinguishing arm (HRET), and a high-volume low-attack (HVLA) turret on the front of the vehicle. Up to 1,200 gpm of extinguishing agent (water or water/foam mixture) can be applied via the HRET and/or HVLA monitor. Throw reaches from both monitors of approximately 85 m enable firefighters to work from a safe distance while covering the entire length of any aircraft fuselage. The extinguishing arm can be raised up to 16.5 m and enables targeted firefighting from an elevated position.

The extinguishing arm is also equipped with a piercing tool, the spike of which can be pushed through the shell of the aircraft in order to deliver extinguishing agents to an aircraft’s interior cabin or cargo compartments. For self-protection, such as when jet fuel may flow beneath the vehicle, it is equipped with under truck nozzles that allow the operator to apply a foam blanet under the truck.

All of the PANTHERs’ firefighting equipment can be controlled from the cabin. The displays and controls in the cockpits are ergonomically optimized and arranged so that they can be operated and viewed by both the driver and the front passenger. The extinguishing arms and turrets are controlled by means of joysticks, which record the movements of the human hand very precisely and transmit them in an equally precise and targeted manner.