The board of trade and transportation, of this city, in its report against high buildings recommends that (1) 200 feet shall be the limit of height of buildings on all the wider streets and avenues; (2) that the height of hotels and apartment houses shall be limited to 165 feet; (3) on the narrower streets and avenues the buildings shall be of justly proportionate lesser heights; (4) every building 137 feet or more in height shall have two separate stairways from the ground floor to the roof, one of which shall be remote from the elevator shaft; (5) all buildings at present in existence, and those of the future exceeding 137 feet in height shall provide and maintain a fully equipped fire plant that shall be satisfactory to the fire department; (6) the building laws to be revised and codified by a commission of experts. The legislature will be asked to pass a bill to the above effect. 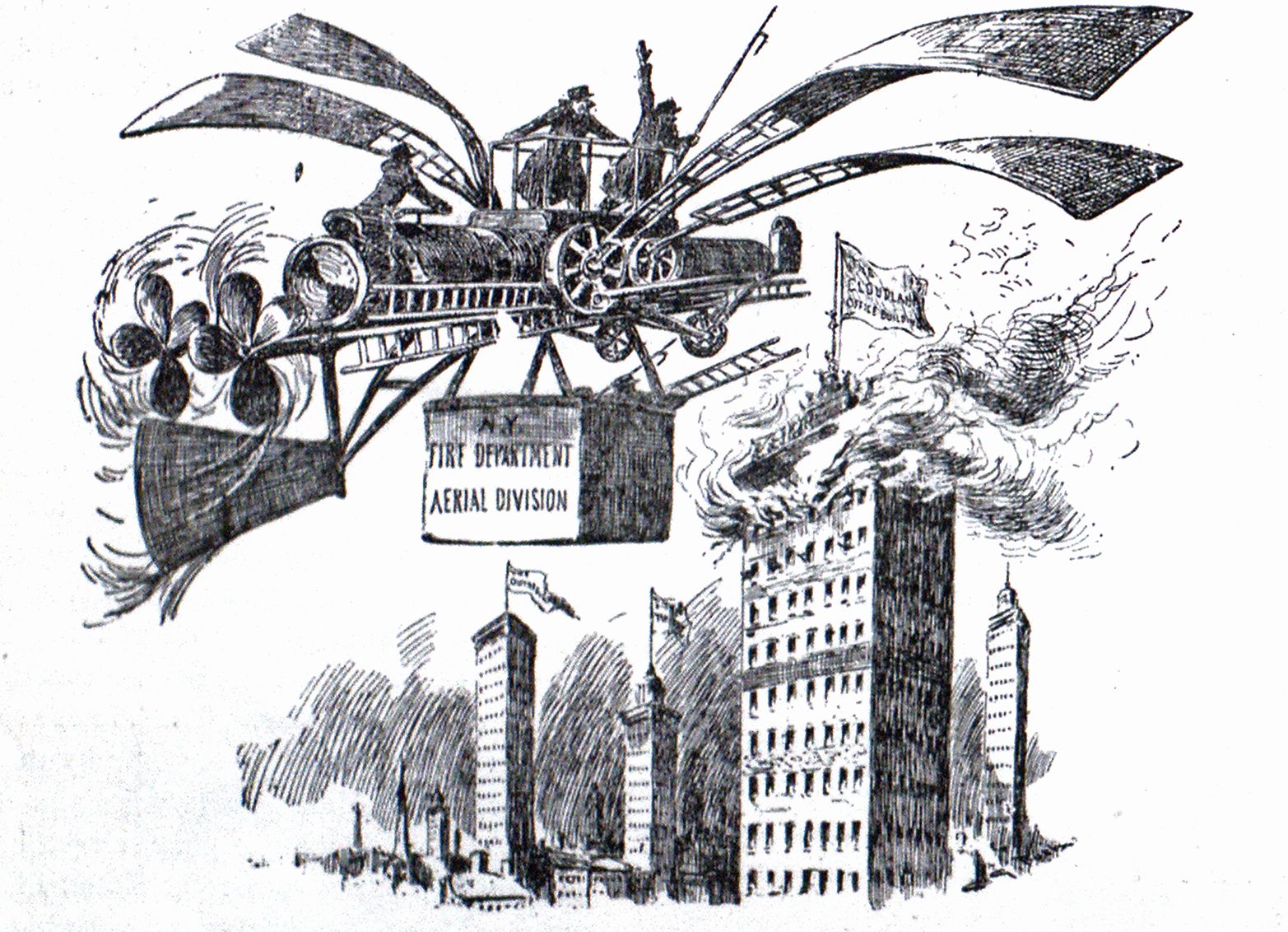 A BILL to limit the height of buildings in this city and probably other cities of the State, will go up to Albany this winter. An unsuccessful attempt to introduce a similar measure was made last year.

When the subject of the prospective legislation was mooted last year a number of owners of downtown property made preliminary arrangements to tear down their old buildings and build new ones of the skyscraper pattern— presumably to get ahead of the law and to gain such advantag as should inure from the ownership of a tall building after danger of further competition in tall buildings had been stopped by law. The Gillender, at Wall and Nassau streets, and the Bank of Commerce Building are believed to have been hastened in their building by the proposed legislation.

The supporters of last year’s bill were owners of tall buildings, certain architecis and citizens, the Chamler of Commerce and the Produce Exchange; the opponents were principally owners of old properties.

The feeling of insecurity engendered by the continued erection of tall structures has reached a climax, and a meeting was recently held in this city to consider the advisability of securing legislation which shall limit the height of future new buildings in New York. Several insurance and real estate men on being interviewed on the subject expressed themselves in different ways.

“A law restricting the height of buildings to be erected in the future would certainly be unfair to owners of property on which low buildings are now standing, as it would practically give a monopoly to those who have already erected or secured permission to erect high structures. If everyone could be placed on the same footing, there would be some justice in making the restriction. It is also to be remembered that, before a law could be enacted, thousands of property owners would rush plans for high buildings through the department; thus largely defeating the object of such legislation. On the other hand there is no doubt but that there should be some reasonable limit placed upon the height of new buildings. Just where the line is to be drawn is a subject for careful study by competent persons. A fair limit would, perhaps, be sixteen stories.lreserving the right,however, to erect new buildings in a given block as high as the highest now on that block— though this might be considered a hardship to owners of property on other blocks.Then the risks, particularly that of elevator service, increase to such an extent as to discourage the erection of extremely high buildings. I find a growing prejudice against going so high. When the Greater New York becomes a fact, the difficulty may also be partly setled, as on account of the better means of transportation there will be more area suited for business purposes and less necessity for these exceptionally high structures.

G. Waldo Smith, of Smith & Sills, wholesale grocers,one of the committee for arranging as to future legislation gave his opinion as follows:

“ I am opposed to the erection of these extremely high buildings, and for many reasons. In the first place, I am told that iron will rust when placed in contact with mortar, and as a result, it will, of course, in time become weak and unable to sustain the load of stone and brick placed upon it. Then, there is the danger from violent gales or tornadoes. While we have not yet had a storm that would destroy such buildings, we can have no absolute guaranteejthat such a storm will never strike this city. The same argument holds true in the case of earthquakes. The danger from fire is also a serious one. I am informed that all these high buildings are insured against fire—thus indicating that their owners are not absolutely certain that they are fireproof. We now have a twenty-four-story city and a four-story fire department. The board of trade and transportation some years ago sent out I to inquiries to owners of high buildings in regard to the height which water reaches by force of gravity. The answer showed that water rarely flowed naturally above the basement during the day, and but seldom above the fourth slory during the night. The enormous weight of these structures is also in my opinion a source of danger. No one knows whether the foundations are sufficient to prevent settling in the course of time. The recent elevator accidents in two of the highest buildings in the city also show that the absolutely safe elevator has not yet been discovered, and under rhis condition of affairs every additional story is an increasing source of danger. The question of damage to adjoining property is also an important one, and in addition to all these objections is one which is of the utmost importance to the public—that of the effect of these buildings in cutting off the supply of sunlight, thus greatly increasing the danger of disease.”

A. E. Marling, of H. S. Ely & Co., real estate agents, thought the highest buildings very undesirable from a real estate agent’s point of view,as the height is not the only factor. “ The newness of the building is an important consideration in renting, and the upper stories of a new twelve-story building will rent for about the same prices as those of a new twenty-story structure. We have never met with the question of danger from elevator accidents. While the attention of the public has been called to this question recently, it is really remarkable that so few accidents of this nature have occurred, when the enormous number of elevators is considered. From the standpoint of any investor also the highest buildings are not especially attractive. The cost of the site is, of course, very great, which tempts the erection of a high building; but the cost of construction and maintenance of the highest build ings is so great that there is quite a disposition among owners to put up lower buildings; as,while the actual returns may be less, the capital invested is, on the other hand, much smaller. I think that some limit will be placed upon the height of buildings, and should not be surprised to see legislation enacted in the near future regulating the height in proportion to the width of the street. I think, too, that builders in the future will, from their own interests, as a rule, keep the limit from, say, twelve to sixteen stories.

Two men prominent in underwriting circles, one a high officer in a leading insurance company,neither of whom wished their names mentioned, expressed themselves strongly against the mania for such buildings. The insurance company’s official claimed that, as far as underwriters are concerned, they have not, as underwriters, any interest in the question.

“ They would as readily insure a high building as any other. The question of health is really the important one; for the absence of light and direct sunlight is certainly a serious menace to health. The height of a building should bear some proportion to the width of a street. There might, for instance.be no objection to the American Surety building in its present location; but there would be if it were situated on a narrow street. I think that no merchandise should be stored above the seventh floor of a building. There is no absolute rule, however, as some classes of merchandise are much more inflammable than others. The amount of furniture in an office is not enough to destroy the building in case of fire, though fire would deface the interior somewhat; but the case would be different if the floors were filled with merchandise.”

“ There is much to be said on the question (said the other underwriter). On the one hand a high building properly constructed might in time of a great conflagration act as a valuable barrier while on the other, if it were nlled with combustible merchandise it might be a torch which the fire department would be powerless to extinguish. 1 think that the highest buildings should be used for office purposes only, as, while a fire might start in such a building, the chances are that it could be controled. As far as matter of fire risk is concerned. insurance men have no hesitation in insuring high buildings.”

An architect who has paid special attention to steel construction, said:

‘‘As far as safety in construction is concerned, there is no difficulty in making a high building as safe as any o,her, provided the foundation is sufficiently large and the owner is willing to pay the expense. As far as rust is concerted, the iron work can be protected. It is only a question of cost. From an architectural point of view, however, it is not possible to produce as fine an effect in high buildings as it is in lower structures, as a high building is in a measure, necessarily a sort of tower.”

By w’ay of quickening the opposition to the erection of such high structures the Evening Telegram of this city published a clever cartoon of a piece of aerial fire apparatus belonging to the aerial fire department of the future. On board this, as it floats in the air far above,the roofs of the lower buildings in the street below is a crew of firemen all equipped and ready prepared to fight a fierce fire that has broken out in the very top-most stories of a skyscraper. Chief Swenie’s advice to let the fire burn down to the fourth story will not be heeded by the coming fireman. Instead, an aerial battalion will be formed to engage with the fire fiend in mid air.

The cartoon is reproduced herewith.