On December 31, 1988, in Chicago, Illinois, one of the most talked about and remembered National Football League playoff games took place at Soldier Field (which sits very close to Lake Michigan). The Chicago Bears, led by Head Coach Mike Ditka, were taking on the Philadelphia Eagles and Head Coach Buddy Ryan.

During this game, an infamous fog rolled in, enveloping the stadium and completely obscuring the game to the fans, the announcers, and millions watching on television. The game started at 1 p.m. under beautiful, sunny conditions. The fog arrived just prior to halftime, and it was completely gone by 4 p.m. when the game was over.

In a documentary made about the game, Philadelphia Quarterback Randall Cunningham was interviewed and described an interception he threw in a critical moment late in the game. Cunningham noted emphatically that, “Conditions contributed to them losing control of their destiny, and the game moved so fast it was as if there was a running clock.”

Cunningham’s quote can be changed slightly and applied to anyone who has ever stepped foot and operated in any position on the fireground. This can also be applied to me many times over the course of my nearly three decades in the fire service. There was one particular event that took place several years ago where I was trapped by “fog,” and I nearly severely injured two of my firefighters on a scene I was commanding. The conditions that morning were the fog, a lack of a 360° size-up, and the failure to review the survivability profile of a victim inside a large single-family residence with hoarder conditions. How many times have we arrived to a normal fire event (sunny skies) and then a fog appears, trapping us and changing our game plan?

After this fire, I started to think about ways I could improve my performance on the fireground. I have always been very engaged and dedicated to my craft; I have studied, read, and analyzed this job my entire career. I have always felt that I had control of the scenes I ran, but here, my ego was checked; it was a wakeup call that I needed make me strive to improve on the fireground. I started to review fireground activities from all over the country such as close calls, line-of-duty deaths, and so on. In my studies, I started to create a list similar to the National Institute of Occupational Safety and Health’s “five” that many of you reading this have heard about. This list is not all encompassing, but sets up a good foundation to help better prepare you for the fireground.

During 2017, I will review 13 “Common Error” items that can allow the fog to catch you on the fireground. Each of these and help you determine if you are at risk of getting lost while performing in a command or company officer position. 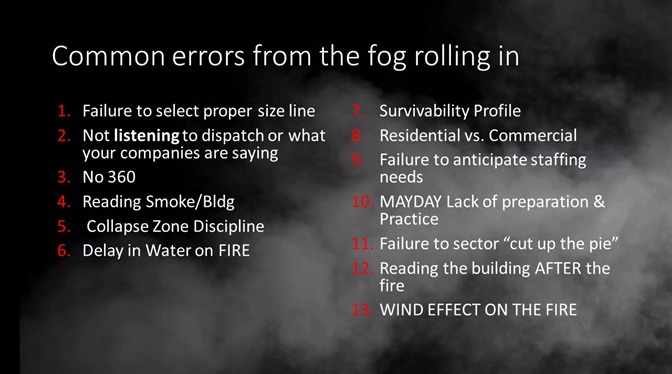 We get up and (hopefully) brush our teeth every morning; it’s a habitual process. When we are faced with the most “common” event—the room-and-contents fire—we pull our 150- to 200-foot crosslay, straighten it out like we trained on, and put the fire out. But, what if we arrive and find two rooms of fire? Or two floors of fire? Better yet, what if, when arriving at a well-involved commercial occupancy, we do not think of the deck gun (another common mistake).

When discussing this subject with a nationally-known fire expert (now retired from a large Midwestern city), he summed up the lack of using large lines such as the deck gun by saying:

“You might think about approaching the use of the deck gun the way you do VEIS. A team of people need to ‘know the drill,’ each being expert in all aspects of the operation, not just the one they are responsible for at the moment. Every piece has to be executed for there to be success. No one—I hope—would pull up on a fire with a report of persons trapped and say, ‘Hey, let’s try that search enter vent thing we read about last month.’ Same goes for a deck gun operation as part of initiating an offensive attack. You best have your stuff together if you are going to try to pull it off successfully.”

By now, most firefighters and fire departments talk about and deal with what has now been termed “the modern fire environment”—plastics, modern furnishings, and so on; it has heat release rates that dwarf those of our grandparents’ furnishings. Today, departments are arriving at well-developed rooms and floors must know the building construction because, as we all know, CONSTRUCTION DRIVES TACTICS!

Our operational time is very short; fast water is by far the best water. With training, this tactic is a proven winner, regardless of the building type. Fire Engineering (FE) writer and FDIC International presenter Jerry Knapp wrote a wonderfully insightful article published in the FE’s October 2015 issue titled, “Modern House Fires Warrant Tactical Agility.” Knapp emphasizes that firefighters need to be tactically proficient and have tactical agility which means (to paraphrase Knapp’s article) making sure our fireground actions—size-up, search, rescue, ventilation, fire suppression, and salvage/overhaul—can safely, efficiently, and effectively defeat the new threats at house fires. The one tool that may be the most underused (and perhaps the most misunderstood) regarding its ability to improve conditions quickly is the deck gun.

Several departments arrive on scene with a quint-type apparatus, and they do not have the luxury of placing such an appliance in service, so this can increase the issue of correct line placement and water flow. The 2½-inch hoseline is perceived by many as a defensive line only. A lack of fire-behavior training and the perception that the 2½-inch hoseline is too difficult to advance and flow can, in today’s social media world, be challenged by doing a quick Web search for the many training videos and articles related its advancement and flow. We need to work on the application of this on the street, as many will become get lost in the fog and stretch what feels good.

It’s all about getting water on the fire. The problem is that, if we require an adequate water flow, we see time and time again the fog enveloping crews as they pull the wrong size line or multiple size small lines when a bigger line or master stream can produce a faster and more effective knockdown. We do what feels best, but on the fireground, the lack of “big water” has led to many burned lots.

Figure 1 shows a mid-size commercial building with its dimensions (taken from the local tax collection site). The video below it shows a fire in that same building. 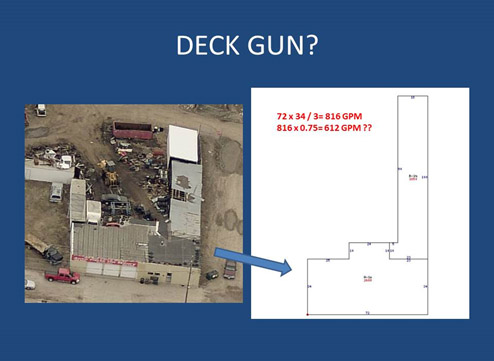 I have no knowledge of the specifics of this fire, but it is a great learning tool to emphasize getting enough water on the fire based on the building’s or compartment’s size.

Be Ready for the “Big One”

Are You Prepared for a Fire on Your Town’s Main Street?

TX Firefighter Seeks Back Pay After Suspension Over Bar Fight