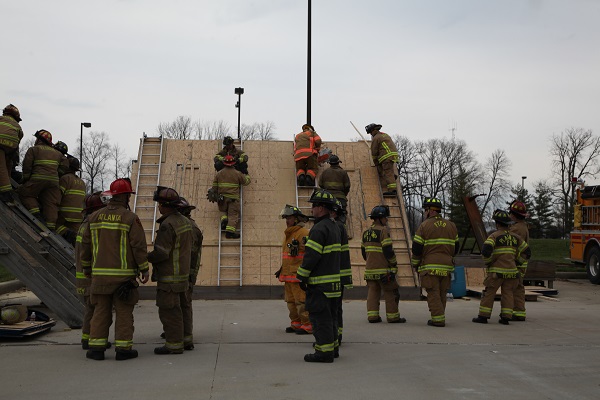 Passion, dedication, integrity, knowledge, courage, compassion, and just a good-old fashioned desire to be your absolute best—I hope that these are some of the core values you live by and the reasons you joined the fire service.

My path was a little different than most. Before I came into the civilian fire service, I was a United States Marine with a primary military occupational specialty (MOS) of 7051—Crash, Fire, and Rescue. I joined in 1999 and went to boot camp in December of that year. The experience was eerily similar to how we all probably felt about earning our place among the men and women of the fire service. I started reminiscing about the old military days: the deployments, the people, my youth, and so on. Most of all, though, I thought back on my thirst to be better each day, to work harder than everyone else and, most importantly, my passion to inspire those around me to not only match my enthusiasm but to exceed it. Why? Because that’s how individuals, units, and organizations become great. You don’t settle; you continually strive to inspire, innovate, learn, and work harder. Sally Field once said, “You have to set the standard so high that even your flaws are considered excellent.” Today, this remains my mindset.

So, how do I still feel so passionately about working hard, striving to be better every day, inspiring someone else to be better each day, and to go “above and beyond” without hesitation? It is because of the core values that were anchored into my very fabric as a Marine. When I first left active duty and went to work for a contract fire department, I was fortunate to work with some great people. One in particular had that same desire to do the right thing, teach people, and learn every day as I did, and it allowed me to carry and build on the strong foundation I had built in the Marine Corps, which believes its core values to be Honor, Courage, and Commitment, and the motto that bonds all of us to be Semper Fidelis or “always faithful.”

This motto doesn’t just mean “faithful to the core,” but to each other, the mission, and your county at all costs. The brotherhood of the Marine Corps is ever lasting; there is no getting discharged. Even when you leave active duty, you forever have that bond. Every Marine before and after you remain Semper Fidelis! Leaders in the Marine Corps preached a leadership acronym of traits or values to live by. The acronym “JJDIDTIEBUCKLE” remains the foundation of how I lead today. These traits/values stand for the following:

The fire service is not the military; it is a paramilitary organization. Once you are a Marine, you will forever live by the ethics and values of the Corps. This concept is second nature to me, anchored into me, and it’s now the way that I work and use it to influence those around me. Even as a firefighter on the floor, I never once thought about how to get out of training or do less work. I was always thinking of ways to do more, push others to want to do the same. I have now worked for six organizations: two in the military with the Marines; one contract; and four as a federal civil service firefighter with the Navy, Air Force, and (currently) the Army. From my experience, one thing the fire service does a poor job with is setting a set of core values by which to live and lead a value-based organization. How many standard operating procedures or standard operating guidelines (SOPs/SOGs) do you have in place at your department? I would guess quite a few; there is a policy or procedure for almost everything. We put these procedures in place to provide a framework for the organization in which to operate, for the employees to understand what they can and can’t do, and how they should act. Although these SOPs/SOGs serve an important purpose, in some instances, I don’t think we ever actually address the problem or the solution.

RELATED: Holt on Our Actions Matching Our Values ‖ Mason on Core Values of Commonsense Leadership ‖ Rossi on the Power to Empower

Instead, what if we focused on instilling a set of core values into the organization that drove the way people act? In many ways, the fire service shares some military values and ideologies. When thinking of the fire service, most people think of the same values of Honor, Courage, and Commitment. We are honored to have the opportunity to serve the community, help people in their worst time, work alongside some of history’s greatest leaders, and uphold the traditions and values the fire service represents. We have the courage to do what many won’t do; the courage to give our lives to save another; and the commitment to ourselves, each other, the organization, mission, and the community. So, how do we become a value-based organization, and what does it look like?

First, you must develop a set of core values in which you believe. In my current organization, we did this by sitting down with a core group of leaders in management/union and officer/firefighter and discussed some key things. We talked about the department’s mission and the vision of where the organization wanted to go. We conducted a SWOT (Strengths, Weaknesses, Opportunities, and Threats) analysis and figured out what these aspects were, internally and externally. These exercises really gave us a better “big picture” idea of where we were as an organization to guide our discussion on core values. We learned that this wasn’t just one person’s individual values that were forced on the organization, but a coordinated effort to get feedback from all levels and layers of the organization and its members. This allowed us to have buy-in right from the get-go. It also educated a core group of chief officers, company officers, and firefighters on our core values and what they meant. This is extremely important in the transition phase.

Second, get out in front and lead. Don’t just write this stuff down, e-mail it out, and tell everyone “these are our new core values” and expect everyone to buy in and start acting according to these values. Get the organization together and teach them the values, their importance, and what they mean not only in definition but to each member and the organization. Describe how these values were developed and how to ensure the members live by them.

Anyone who is passionate about something can make a compelling argument as to why something is great and how it will help; the hard part is anchoring these values into everything you do. This is the time, you—as a leader—and your core group can “walk the walk” and lead by example. The statement, “People have to buy into the leader before they buy into their vision,” is something I’ve always believed. Until you gain that trust, lead by example and, from the front, you will not fight an uphill battle. If your core values are passion, professionalism, and integrity, bleed those values each day. If you don’t, everyone will see it, and all you will have done is waste your time. The core values should have meaning to you, so it should be easy for you to come to work each day and be passionate about everything you do. Be the symbol of professionalism to those around you. You need to look the best, communicate with people the right way, set standards and expectations, have respect for internal and external customers, maintain a positive attitude, and then empower those around you to succeed. Be viewed as a person of integrity; someone who demonstrates kindness, transparency, empathy, and positivity to our customers while maintaining follow-through for “doing what is right” These values need have a place everywhere.

When, during training, someone is “going through the motions,” take the time to hammer into him those core values. Speak to him passionately on why our job is the best job in the world and how many people would fight to do what he’s doing. Motivate him through encouragement, and bring that passion out of him, and have an “all-in” attitude. Speak of how a high level of training will improve his performance so that the team can operate safe and effectively at any incident.

Professionals take pride in their performance, and everyone trusts them to try and be at their absolute best all the time so they can go home to their families each night. Opportunities like these will present themselves daily and in many forms. If you can find a way to take advantage of these opportunities and influence the members to always think about those values so that everything they do is done passionately, professionally, and with integrity, it will become second nature. Just as the values that were anchored in me continue to inform me, other members will always be conscious of their core values.

Create that culture, that environment where everyone truly lives by YOUR values. Think of an organization where everyone who comes to work each day is as passionate as you. Think of who you can influence positively today, how to add value to the organization today. And do so with an attitude of success at all costs! Whatever your values, believe in them and live them. Become a value-based organization, and success in whatever you do will follow.

Jacob McAfee is a 15-year fire and emergency services veteran, having served in a variety of positions across the military and Department of Defense (DoD). He is the assistant chief of operations at the United States Military Academy in West Point, New York. McAfee began his career with the United States Marine Corps as an aircraft rescue firefighter; after eight years of service and multiple deployments, he left active service honorably in 2007. He’s lead and mentored personnel in Iraq as a captain and division chief. After Iraq, he has served as an assistant chief of operations, a fire marshal, a fire prevention chief, and a health and fitness coordinator as a civilian with the DoD.

McAfee is a chief fire officer designee and a chief training officer designee through the Center for Public Safety Excellence. He is a member of the Institute of Fire Engineers and sits on the professional development and education committee. McAfee earned a Master’s Degree in occupational safety and health and emergency management. Currently, McAfee is working on his PhD in emergency management with Capella University and is attending the National Fire Academy’s Executive Fire Officer Program. He is an instructor for the California Office of Emergency services—hazardous materials section, the California State Fire Marshal, the National Safety Council, and the American Heart Association. McAfee also instructs hazardous materials, urban search and rescue, and incident command courses throughout California. He is IFSAC/Pro Board certified Fire Officer IV, Inspector III, Instructor III, hazmat technician, hazmat officer, confined space technician, swift water rescue technician, trench rescue technician, advanced rope, and collapse structure technician.