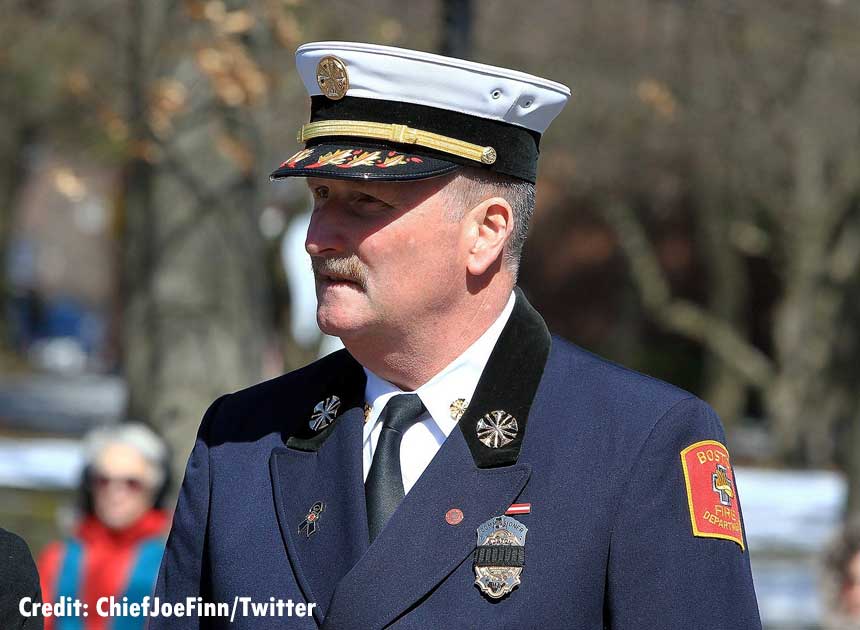 Boston (MA) Fire Commissioner and Fire Chief Joe Finn is retiring after more than 35 years on the job. He is retiring on March 12.

Finn has been a member of the Boston Fire Department since October of 1984 and rose through the ranks to the leadership position in 2014. Per the City of Boston Web site, he was promoted Deputy Chief of Personnel in 2001, and initiated and trained the first team of investigators to examine harassment and discrimination allegations. He additionally trained firefighters to become mediators to achieve conflict resolution among staff. From 2005 to 2014 he served as a Division Commander, in charge of all administrative functions, fireground operations, hazardous materials, and technical rescue responses in Division One.

Among his many achievements with the department, he established an EMT training program that increased the number of EMTs on the Boston Fire Department by 50 percent. He was also involved with the investigation of firefighter occupational cancer in the department. Finn also served in the United States Marine Corps from 1979 to 1982

Finn reflected on his years of service in a series of posts on Twitter.

After 35+ yrs, the last 5 1/2 as Commissioner/Chief of Dept., I am retiring March 12th. It’s been my honor to lead & work with the dedicated uniform & civilian staff of the BFD. Tremendous support from Mayor @Marty_Walsh and a great, beneficial relationship with @Local_718 (1-3) pic.twitter.com/vLQvIHfDS9

I’ll miss the great support we receive in the neighborhoods but know that the men & women who make up the BFD are the best; highly trained professionals who serve with distinction and compassion.Trucks & tools are nice but it’s Boots on the Ground that make our mission work (2-3) pic.twitter.com/r0BM6Hdq9R

Having risen through the ranks, it’s been a rewarding career though challenging at times. Now it is time to be with my family more but continuing on a part time basis in the fire service as I weigh several opportunities. Stay Safe and Protected. Thank You All. (3-3) pic.twitter.com/VufCZNNpWo