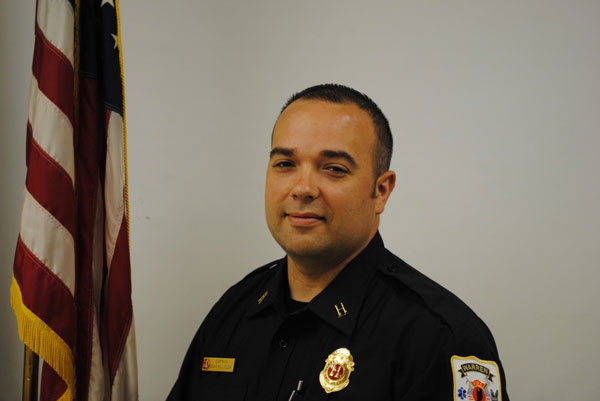 The 2015 winner of the Ray Downey Courage and Valor Award is Captain Sean Killelea of the Warren Township (IN) Fire Department. He will be presented the award at the Opening Ceremony of FDIC International on April 22, 2015.

Killelea responded as mutual aid in a commercial structure fire. He was cited for his role in rescuing Firefighter Matt O’Donnell and the attempted rescue of Assistant Chief Jamie Middlebrook, both of the New Carlisle (IN) Fire Department. Middlebrook was lost in the building collapse. Following is a summary of the incident.

On the evening of August 5, 2014, the New Carlisle (IN) Fire Department responded to a reported commercial fire in Willis Township, Indiana. There was heavy fire on arrival, and a defensive attack was initiated. Jamie Middlebrook and Matt O’Donnell stretched a 2½-inch handline with a ground monitor into the attached exposure to try to protect numerous acetylene cylinders. They did not know that the fire was in the truss space above the pan ceiling. The truss system failed, trapping Middlebrook and injuring O’Donnell.

Warren Township Fire Department’s Squad 18 and a box chief on a commercial fire responded as mutual aid. When they arrived at the scene, quad 18 Captain Sean Killelea and Firefighters Jay Pendergrass and Aaron Carsten were assigned to staff an attack line in the ongoing defensive operations.

Command rescinded their assignment on learning that two firefighters were in trouble. The incident commander instructed Squad 18 to serve as the rapid intervention team and to follow the hoseline that was already advanced into the building to search for the two firefighters trapped inside the structure following a collapse.

Squad 18 went on air and entered the structure through a cutout from a garage door on the north side of the structure. They followed the hoseline up to the edge of the collapse. The east wall of the collapse was fully involved in fire. They followed the hoseline until they encountered the collapse, where visibility decreased and heat increased. The east wall of the collapse was fully involved in fire.  Killelea and his crew battled horrific conditions. The building was coming down around them. They were surrounded by fire and collapse and, at one point, were forced to take cover under a truck in a barn to avoid being caught in a further collapse. Killelea and his crew located O’Connell and pulled him to the door with the help of New Carlisle Engine 191. AC Middlebrook, however, was under the roof system, which had fallen on him. After the fire condition was sufficiently knocked down, heavy equipment was used remove the roof system from the chief’s body, which was then transported to an ambulance.

HOW SHALL WE PARK AUTOMOBILES?