John W. Hill, Chairman of the General Entertainment Committee in charge of arrangements at Cincinnati for the reception there next May of the American Water Works Association, appeared before the convention accompanied by F. C. Bitgood, of the Babcock & Wilcox Co., Cincinnati; Royal Mattice, Sales Manager of the American Steel & Wire Co., same city, and E. B. Amole, of The Hooven, Owens, Kentschler Co., Hamilton, O. All arrangements looking to the entertainment of the American Water Works Association are in the hands of these gentlemen, with the addition of Joseph W. Ellms, who was not able to come with them at this time. Mr. Hill made a strong plea for the Central States Water Works Association to affiliate as a Chapter or Section of the American Water Works Association, and his remarks were ably seconded by his colleagues, especially Mr. Mattice, who was commissioned as the special representative of Mayor Spigel of Cincinnati. Mr. Hill suggested that if the Central States Water Works Association was not prepared to definitely accept the proposition at this time, the next best thing would be for them to hand in their decision at Cincinnati next May, and urged that they hold their next year’s convention there the same week with the American. Mr. Hill and his party retired pending •discussion of the matter by the convention. Mr. Thomas Ford, of Cincinnati; Mr. Brady, Mr. Collins, Secretary Bricker, Mr. Fischer of the Glauber Co., Mr. Dinkel, Mr. Tonkel, Mr. Williams, Mr. Beardsley and others, at the conclusion of which discussion it was decided that the sentiment was favorable for affiliation, but decision would be reserved for the present and until next May, at which time the Central States would hold its convention in Cincinnati, beginning on Monday of the same week that the American is to be there. Before this action was taken, however, a very full discussion as to the merits and claims of cither cities that had sent invitations was had, these being Alliance, O., Daylton, O. and Manistee, Mich. Letters and telegrams were read from W. J. Rose, President Alliance Board of Trade; The Greater Dayton Association; Max E. Nealg-‘-Seeretary Manistee (Mich.) Board of Trade, and the Mayor and City Coun. cil of same place. Manistee, through Mr. Collins, withdrew its claims for this year, reserving the right to renew them later. The vote to go to Cincinnati was considered as a signal victory for the Cincinnati delegation, and a vote of thanks was tendered them for their presentation of the subject upon motion of Secretary Bricker.

In the course of his response to an address of welcome by Mayor H. I,. Kirk, of Wheeling, President J. C. Martin said: “It is with .great pleasure that we have listened to words of welcome from his Honor, the Mayor, of this industrious little city. I say ‘little’ city for the reason that here sheltered among the hills you have out of the earth in its richness and store of natural wealth of coal and gas developed a bee-hive of industry, and the milestones of this great republic tell how closely together are situated many little beehives of industry such as you have, in Wheeling. You welcome us .among you as your guests, but you know not what kind of men we are or the industries that we are engaged in, and in order that you may know something Of us and of the motives that have brought 11s together and bound us in an organization Representing a great industry, that of the water works of this country, I would refer to a little ancient history showing the growth of this character of business. The first great industry in the way of public utilities originated back in an age when people began to group themselves into clans or communities, and to establish a primitive form of government; it was then that the spring or source of water supply became a public factor in the health of the little communities; it was then that the clan, or the governor of this little clan, sought to exercise control over this water supply in order to protect the health and life of the few people under his control. As communities grew in size, and as the people collected in larger numbers to form cities, it became important that the water supplies, both for the health of the community and for the progress of industry, because water must be furnished not only for drinking and culinary use, but to carry away offal and sewage as well as to generate power for steam, became vitally necessary and water works began to take on a definite character and form. They took the form of both publicly and privately owned works or utilities; the publicly owned were established by the community investing the agregate capital of the community as represented by taxes into the enterprise, and when the public hesitated to do this because of the uncertain return or for other reasons, private capital took up the work and shouldered the responsibility, and did that for the public benefit which otherwise would have been left undone, asking in return a reasonable compensation for the service. Representing these classes of utilities we are here as your guests upon this occasion.”

The Chair appointed as Auditing Committee Messrs. Beardsley, Tobias and Tonkel, to whom were referred the reports of the Secretary and Treasurer, and the same pronounced correct.

C. B. Cooke, City Engineer of Wheeling, W. Va., delivered his paper on “Filtration and Purification of Ohio River Water,” and in connection therewith read a communication from Dr. M. H. Frost, Past Asst. Surgeon. Pubic Health Service, in charge at Cincinnati office.

On motion of Mr. Tobias a vote of thanks was tendered the outgoing officers. Retiring President Martin voiced his grateful appreciation of the honor conferred on him by eleqting him to two successive terms as president, and assured the members that they would ever hold a warm place in his heart, and that he would be ready to serve them at any time within his power. He commended very strongly the proposed affiliation with the American Water Works Association, and did not believe that in becoming affiliated with that large and influential organization, they would lose anything of their own individuality,, but, on the other hand, had everything to earn and nothing to lose.

The registration at the convention was as follows:

R. B. Naylor, Secretary Board of Trade, Wheeling, W. Va.

This company had a good display in charge of Mr. H. J. Harte, showing their line of brass goods and a tapping machine demonstrated in operation.

Exhibit was in charge of Arthur I. Fischer, showing corporation and curb cocks, and line of water works brass goods.

Joseph C. Beardsley, Cleveland Representative, and a Past President of the Central States Water Works Association, was on hand with an exhibit of Thomson and Lambert Meters, and distributed his card with this legend: “And they shall eat bread by weight;, and with care; and they shall drink water by measure.”—Ezekiel iv., 16. 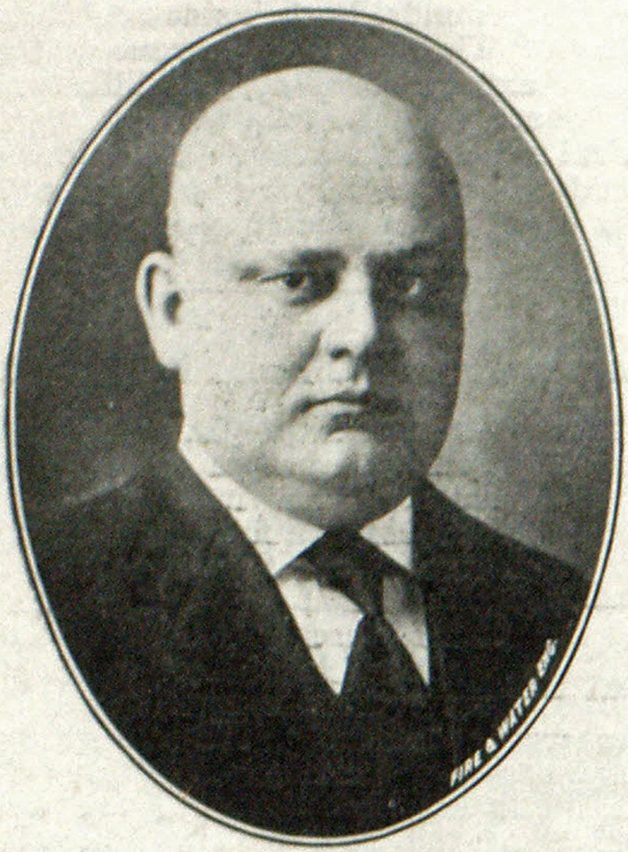 The annual convention of the Central States Water Works Association, which will be held in the Windsor Hotel, in Wheeling. W. Va., on August 25, 26 and 27, will be the association’s eighteenth annual convention. An interesting program has been arranged for the three day convention and present indications point to the largest attendance in the association’s history. The officers of the Central States Water Works Association are: President, J. C, Martin. Wilmington, O.; vicepresident, F. W, Collins, Manistee, Mich.: secretary, R. P. Bricker. Shelby, O., and treasurer, A. W. Inman, Massillon, O. The convention last year was held at Cedar Point, on Lake Erie.

News of the Manufacturers