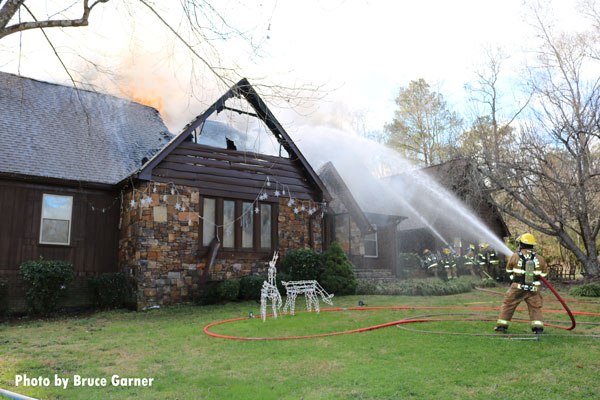 High winds helped a fire destroy a home in the Big Ridge community yesterday afternoon. The Chattanooga (TN) Fire Department received the initial alarm at 1:57 p.m. and responded to 1826 Colonial Shores Drive with six fire companies. Lt. Scott Sheets with Quint 19 said smoke and flames were visible when the first firefighters arrived on the scene.

Lt. Sheets said firefighters were initially told that someone might still be inside the house, so firefighters made their way inside the smoke-filled structure. The firefighters didn’t find anyone after a quick search and were beginning to make an interior attack on the fire when flames broke through the roof. At that point, Lt. Sheets ordered all firefighters out of the structure for their own protection.

Firefighters said that the strong winds helped the fire spread early on, making it that much more difficult to get the blaze under control. It took more than an hour before firefighters were able to get most of the fire out, but they would have to remain on the scene for several hours to put out the remaining hot spots. Though the garage was saved, the house will be considered a total loss. No injuries were reported. Firefighters were told that three people live in the house and all were reportedly away at the time of the fire.

The cause of the fire is under investigation by Captains Henry McElvain and Anthony Moore with the Fire Investigation Division. Chattanooga police and Hamilton County EMS also provided assistance on the scene.

Fitness Efforts Based on Fire Tasks