A suit has been begun at Chicago which attacks a constitutional question—namely, the legality of the Chicago board of underwriters, which exists to run the fire insurance patrol. The board has entered suit to recover the patrol assessment from the Dubuque F. & M., payment of which had been refused, because the Chicago agents of the company had not been able to get action for their application for membership in the board, which has been pending for over a year. The Chicago board of underwriters operates under a special charter granted by the legislature in 1881. Fire insurance patrols were unknown then; but in 1874 an act was passed authorising any incorporated board of underwriters to levy a tax for the maintenance of fire patrols. In the recent hearing it was claimed that the legislature could no more add to the rights granted by the special charter than it could take any front them, and that the act under which this private corporation was given the right to impose a tax was unconstitutional. Argument on this question was postponed. T he point was also raised that it was improper to assess the company when it was not a member, through its agents, on the ground that it was taxation without representation. A peculiar feature of the situation is that the charter declared the rules and byelaws of the existing Chicago board in 1881 to be those of the new corporation. Every copy of those rules and byelaws was destroyed in the fire of 1871. and all the incorporators are dead. The present byelaws are those adopted in 1872, and it is held that it is impossible to prove that they are not the same as the original ones. 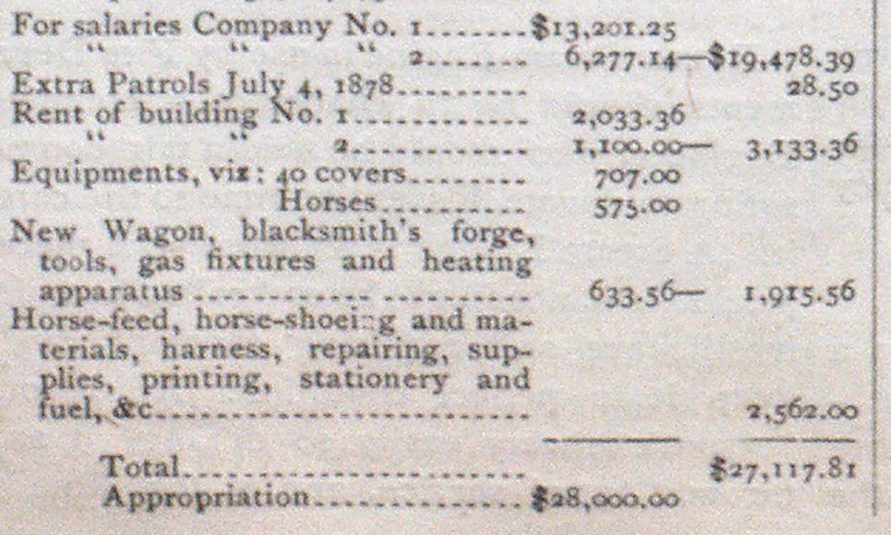 Report of Operations for the Past Year.

At a regular meeting of the Chicago Board of Underwriters, held in their rooms October 15, 1878, the following reports of the Committee on Fire Patrols, the Superintendent’s report, and work for the past year of the patrols, etc., were presented and approved.

To the Chicago Board oj Underwriters :

The organization of the force has been maintained without material change.

The Superintendent’s report herewith submitted is replete with valuable information as to the work ings of the Patrol.

The inspection of buildings, which has proved to be of great value in the past, will be continued during the coming fall and winter with renewed

You will observe that the expenses appear larger by $832.37 than last year-although covering incidental expenses for thirteen months-yet in reality they are $1,083.19 less, $707 having been paid for covers to replace those lost at the fire of Field, I.eiter & Co.’s retail store on the 14th day of November; $575 P for horses to replace those disabled by the accident that occurred on the 8th of August, and $633.56 paid for new Wagon and equipments, for and incident to the taking possession of the new house. The. largest item in reduction of expenses you will find under the head of horse-feed, horse-shoeing, etc. Last year they were $3,755.20, this year they are $2,562, a reduction of $1,193.20, and this reduction is owing largely to the fact that since May 1 all the wagon-repairing and horseshoeing for both Patrols has been done by the members of the Patrol at the new house, a forge, etc., having been erected for that purpose in the basement.

Your Committee would further report that the building to which reference was had in their last report to be erected for the use of the Patrol at No. 176 Monroe street by L. Z. Leiter, has been completed, and was occupied by the Patrol on the 31st of January, and a lease of said house has been j executed for five years from February i, 1878. We desire to say in connection herewith, that by the contract with Mr. Leiter, he was only to enclose the building, and furnish the materials tor the finishing of the interior, and the entire interior work of finishing was done by the members of the Patrol.

The furnishing of the new house requires more || than a passing notice, it having been a question of serious consideration to the Committee, as the building approached completion. Upon examination, it was found that the furniture in the old house was unfit for further use, there being no funds in the Treasury, or appropriations for that purpose, the question, how is the new building to be furnished ? promised to be a formidable one, but was promptly and generously answered by the merchants of Chicago, who. upon learning the facts of the case, with characteristic liberality and forethought, responded gladly, showing their appreciation of the Patrol by meeting their necessities.

The formal opening of the new Patrol House took place on the 16th day of February, a detailed account of which, with contributors’ names, will be found herewith.

In conclusion, your Committee desire to express their entire satisfaction with the conduct of the officers and members of the force, and the very efficient manner in which they have performed their duties.

Recapitulation 0f Expenditures for the Year Ending September 30, 1878, for Patrols Nos. 1 and 2.

Fires extingui hed by Patrol Company No. t for the year ending September 30. 1878 :

The roster of the Patrols, showing the name, age, former occupation, etc., of the members, reveals that the twenty-four members are between the ages of 32 and 35, their total age is 640 years, and the average is 26; years. Their former employments, as given, slow a large variety of mechanics among the force, thus enabling them to accomplish the various branches of work required about the quaiters in a workmanlike manner. The list embraces 2 firemen, 3 teamsters, 4 clerks, 2 carpenters, 2 brickmasons, 2 sailmakers, 1 each, steam fitter, plumber, horseshoer, engineer, civil engineer, stone cutter, painter, carriage blacksmith, and carriage painter.

GENTLEMEN This September 30, 1878, ends the fiscal year of the Fire Insurance Patrol. As in former years you require of me a report of the past year’s workings of the organization, together with the amou t of expenses, the following is submitted :

During the year the Patrol moved in its new Quarters No. 176 E. Monroe street, after having themselves completed the interior so that they might occupy it by February 1, 1878, and the forma! opening occurred on the 16th of the same month. Owing to the extra amount of labor performed (which never was attempted by any similar organization), our building inspection has not had the attention it requires from us. As we now have all things completed, it is being carried on with renewed attention. It is with sad recollection I have here to report the death of one of our number, Edward F. Ferris, who, during the warm weather, after retiring for the night and finding it too warm for him to sleep in bed, arose, taking a pillow and blanket and going to the rear room off from dormitory where a large door was open, he lav down with his head resting on the ’doorsill. A s ill alarm was given by Patrolman on watch in tower, and in waking up, with his noted promptness, he ran in the wrong direction, having been accustomed to run as he did. In changing beds he changed his usual position, and in responding to alarm forgot and ran out the door, falling to the ground, a distance of 18 feet, and in so doing injured his spine, from which he never recovered, the injuries causing his death August 17, 1878. Thus we were deprived some means provide an association for the care of our sick and disabled members, so that those who wish at any time may, for services rendered, make ⅛¾ ⅞¾25te you in the dangerous discharge of their duty. June 1, as per order of your committee, we purnight and day. Records of the same are at all times open to underwriters at Headquarters, together with what information can be procured durtng and after the fire. 1 he same is conducted with no apparent increase of general expenses, and is delivered to all local and general agents in the shor est time possible. Ifalargefire.it is delivered 11 Wh’’e “ ‘S bUrniDgl the balance soon

During the year we have purchased forty (40) new covers, ma erial for the new Wagon and for afeting the single Wagon, including new box. We have .quipped shop in basement, with necessary tools for what manufacturing, altering and rpairing that may be required by the two Companies; ako, for the shoeing of all our horses. We have h rses been in the obliged past year, to make as several sickness changes and accidents in our compelled us to do so. I would like to call your not alone in quarters, but at fires such men are often Vt ry useful in saving property. In quarters repairs on Wagcn, buggy, snaps ar.d what irons tor working machinery in house from February 1, shoeing from March to dawouldhave cot | $145.05.

I his does not include work on new Wagon, and the altering over of single Wagon, including new box, the cost of which would have been about $900 Whatwe

What we would have done, I know not, but for I the kind interest of Mr L. Z. Leiter, in erecting such elegant quarters, in such a central loca ion, for the Patrol’s efficiency, as our old quarters were not suited to our wants.

To Mr. Leiter and the contributing merchants we extend our thanks for their liberal donations to make this our house (for such we have to make it) so comfortable and so acceptable, after so many lab rious hours that we spend during the year in the discharge of our duty.

Gentlemen, you have the thanks of us all, again and again ; and, as in the past, you will always find us in the future, guarding our motto :

Before concluding, 1 would like to call your attention to the report of Company No. 2, as last year’s work far exceeds any prior one. The discovering of fires from the tower has been a principal teature, together with the covering of the stock of Clement, Sayer & Co., with results best known to the companies interested.

Captains and members of the organization, 1 dare not attempt to express my appreciation of your faithfulness and willingness to undertake the work you have completed and done with such credit to this organization, and at no time omitting your fire duty. Gentlemen, accept my thanks a> d well wishes.

In conclusion allow me to thank L. Z. Leiter, Esq , for such quarters as no other organization possess.

To the merchants who gave so liberally towards its elegant furnishing; to the underwriters for the last, iriteest”inanifestedbyouhTgTm”they but not lens’, to my Committee, to whom did”’and 1 am under many obligations for their untiring efforts to give or get all to make, what they all now proclaim this, the model fire house in America. To you I cannot find words in my vocabulary to expr> ss my feelings.

Hoping the annexed report meets with your approbation, I remain, as ever,