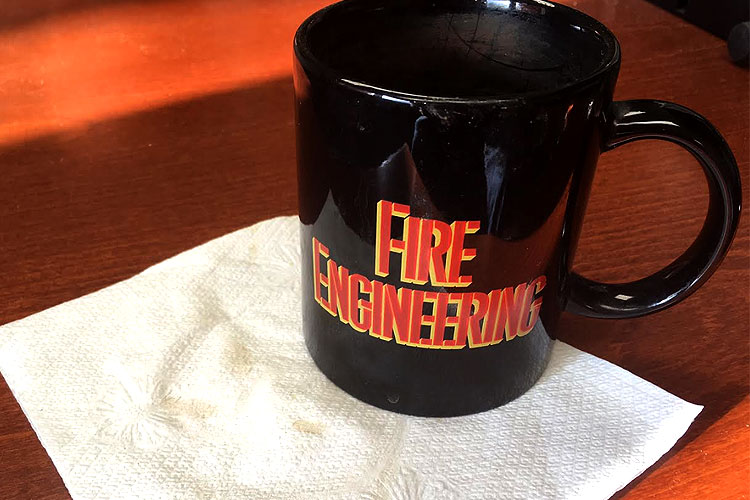 Chief Matt Love concludes his extended meditation on the nature of coffee and leadership in the fire service.

As a loyal patron of my local coffee establishment, I found myself grabbing a cup on a high-frequency basis. My favorite joint had a loyalty program and I had achieved gold status, membership card in hand! In fact, in this modern age I would pay for my coffee using this golden passport, earning points along the way. One day I used my card to purchase coffee for a friend, and he proceeded to educate me on the latest and greatest method of membership. Apparently, I was not quite as modernized as I thought. The newest of coffee house frequenters applied their gold status using an “app” on their phone, with no need to carry around a card. As he proceeded to tell me about all the great benefits of this option and how antiquated I was for still carrying a card around, I just wasn’t convinced. After all, I liked the shiny gold card.

The following morning as I hit the drive through at my coffee sanctuary, I observed the occupant of the car in front of me handing the barista a phone; no doubt it included the newest achievement in gold status technology. As I waited my turn, I thought long and hard. Was I ready to take my coffee acquisition to such a level? I pulled up to the window, and the answer became abruptly clear. The barista happily asked me for payment, and as I handed her my shiny gold card it slipped from her hand in between the window and my vehicle, falling into a puddle that had accumulated from the melting of snow. It was then and there I realized that the latest and greatest technology certainly has a place, but it also can have a weakness.

RELATED: Dane Carley: Promoting a Good Leader on Purpose | The Silver Bullet for a Successful Fire Department | The Trouble with Leadership

A pitfall of this replacement, rather than expansion, has resulted in dwindling face-to-face interaction with our team. The face-to-face interaction has been replaced with short, impersonal messages. Although these may achieve efficiency, it comes at the cost of personability. Without this personalized interaction, the passion of the leader is less and less noticed. As members of our team see this less, their vision of the leader begins to alter and distort. All that is left are those quick, efficient messages, all business and all but personal.

Technology is an amazing tool that great leaders must use, where applicable. With its implementation, the best of leaders will maintain a personal interaction with their team, focusing on the person receiving the message just as much as the message itself.

Stop and Smell the Coffee

Like many of my colleagues, I enjoy a nice afternoon cup. One cold winter day, I started the daily ritual at 2:45, not 2:44, but 2:45, of brewing a pot of coffee for the headquarters staff. Usually, I would start this process, then run back to my desk to get a little more work done while it brewed. But that day was different. Instead of running back and getting those few seconds of work done, one of our firefighters was visiting and I found myself engaging in conversation with her for the 6.2 minutes it took to brew the pot.

In this short time, I learned more about her than I had ever known. I learned what was going on in her world, a little more about her family, and I even received some little glimpses into what her passion was in our industry and what motivated her. For what was a short period of time, I was able to have a valuable experience with a member of our team and now better understood how to lead her.

There is no doubt we get moving pretty fast and can find ourselves squeezing every little second out of our day, but some of the most productive time is the time we spend with our team simply “watching the coffee brew.” I have caught myself identifying how monumental the task is to find  quality time with our firefighters in the stations, and how every spare second counts when we are striving to be a best-in-class department. Every spare second does count, but so does what we do with those seconds. I came to the realization that it doesn’t have to take a lot of time to carve out meaningful time with our team. From that point forward, our mantra went from, “stop and smell the roses,” to “stop and smell the coffee, and do it with someone.”

So whether you drink coffee or not, hopefully you can relate to these “Coffee Stains”. I can’t quite visualize making it through the day without my hot beverage, and those we lead can’t evolve without deliberate acts of genuine leadership. Our teams can spot the disingenuous leadership attempts quickly, and, lacking leadership from the heart, they will make their own path. Even lousy coffee smells good brewing, until you take a sip!

Matthew Love has served as a fire chief of the Fort Meyers Beach (FL) Fire Department. since 2009, and has also served as a deputy fire chief of operations and division chief of training. He has worked for many emergency service agencies, including the city of Colorado Springs (CO) Fire Department. He earned the distinguished Chief Fire Officer Designation by the Center for Public Safety Excellence, and graduated from the United States Fire Administration’s National Fire Academy Executive Fire Officer Program. He holds a master of science degree in leadership with an emphasis in disaster preparedness and executive fire leadership, a bachelor of science degree in public safety and emergency management, holds an associate degree in fire science technology, and an associate degree in wildland fire science. He spent several years as an adjunct professor for the Colorado Community College system, teaching a variety of fire science courses. He also teaches courses in leadership, customer service, and firefighter safety throughout the nation. He speaks nationwide at various leadership events and has had the honor of being a reoccurring speaker for United States Air Force Academy Character and Leadership programs.