For more than a century, it has been proposed that a layer of char on the surface of heavy timbers acts as insulation and will slow or prevent further burning of the wood. This proposal was questioned by Francis Brannigan in 1971 and 1982 in the earliest editions of his (and its other authors) book Building Construction for the Fire Service. Yet buildings of wood construction, whether of heavy timber, wood frame, or lightweight wood structural components continue to burn and are destroyed by fire. If there were merits to this proposal, spectacular photos and videos of these fires would not appear as often as they do on televised news broadcasts or on the Internet.

This proposal is again being used by the people who today promote the use of “mass timber” in construction, which includes glulams, “cross laminated timber [CLT],” “nail laminated timber,” and other variations.

The U.S edition of the Cross Laminated Timber Handbook is free to download at https://www.thinkwood.com/products-and-systems/clt-handbook. It is distributed by the American Wood Council, the Wood Products Council, and other organizations and government agencies. It restates this proposal in Chapter 8, “Fire Performance of Cross Laminated Timber Assemblies.” However, it states in the later sections of Chapter 8 that in the full-scale fire compartment tests in a test building of CLT construction, the walls, and ceilings of the test rooms were protected with gypsum drywall board.

Char may be an insulating material, but only when it has been cooled to the ambient temperature and isolated from the fire which created it from wood. Since char is mostly carbon (fuel) and ash, it can be easily ignited. If it were not, charcoal would not be such a popular fuel for outdoor cooking.

I propose that char on the surface of wood that is still burning is not an insulator; rather, it is still fuel at or above its ignition temperature and is part of the combustion process. As the wood timbers; load-bearing laminated columns, beams, and laminated walls and floor panels; and other structural members continue to char, more of the cross section of the load-bearing wood will be replaced by char, which has little strength, either compressive or tensile. Eventually, enough wood will be converted to charcoal and combustion gases (water vapor, carbon dioxide, and others) that the safety factor of the structural members will be burned away, leaving that part of the building subject to structural collapse (photo 1). 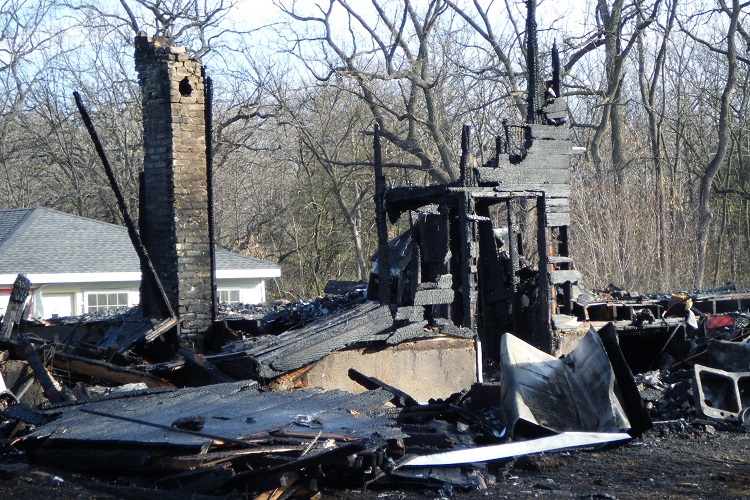 If a layer of char had the insulating value that is proposed by the advocates of renewable, sustainable, and “green” construction materials and methods, campfires and fireplace fuel sets using logs would self-extinguish after a short time because of the proposed insulating value of the char formed by combustion. Yet, anyone who has ever enjoyed these fires will recognize that these pieces of wood, with large cross-sectional dimensions, will burn until they are completely consumed or unless someone intervenes by applying water or another extinguishing agent to the fuel.

The officials and organizations that develop and revise building and fire codes have accepted, as fact, the proposal that a layer of char on heavy timber acts as an insulator, despite the history of serious fires in buildings of heavy timber construction. To preserve the lives of the future generations of occupants of these new mass timber buildings as well as the lives of future generations of firefighters who will respond to fire alarms in these buildings, today’s fire service must insist that any building of heavy timber or mass timber construction must provide the following:

These requirements are needed, whether the mass timber building is of low-rise or high-rise construction, as is proposed for New York City, Milwaukee, and Chicago.

Gregory Havel i a member of the Town of Burlington (WI) Fire Department; a retired deputy chief and training officer; and a 40-year veteran of the fire service. He is a Wisconsin-certified fire instructor II, fire officer II, and fire inspector; an adjunct instructor in fire service programs at Gateway Technical College; and safety director for Scherrer Construction Co., Inc. Havel has a bachelor’s degree from St. Norbert College, has more than 40 years of experience in facilities management and building construction, has a Chief Power Plant Operating Engineer license from the American Society of Power Engineers (ASOPE), and presents classes at FDIC and other venues.