Modern concrete has been in use since the middle of the 19th century and in its present formulation since the early 20th century.

Modern concrete is a cementitious material that is formed by the chemical reaction between Portland cement and water in a mixture of aggregates of varying sizes. Concrete sets into a solid mass rather quickly after being poured into forms (photo 1), and as it cures over time, it gains compressive strength. 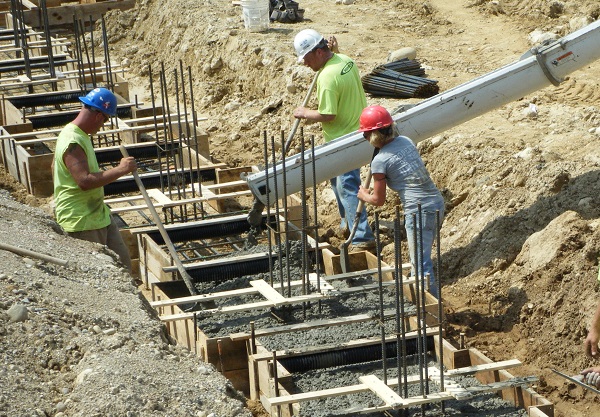 By itself, Portland cement concrete has little tensile strength. Where tensile strength is needed, reinforcing bars (photo 2), wires or strands of steel, glass fiber, plastic, or other materials are placed in the forms or mixed into the concrete before it is poured. In general, the longer the curing period, the stronger the concrete will be. Modern concrete used for special applications sometimes uses chemical accelerants to speed the early curing and achieve the concrete’s design strength in days (instead of weeks or months). 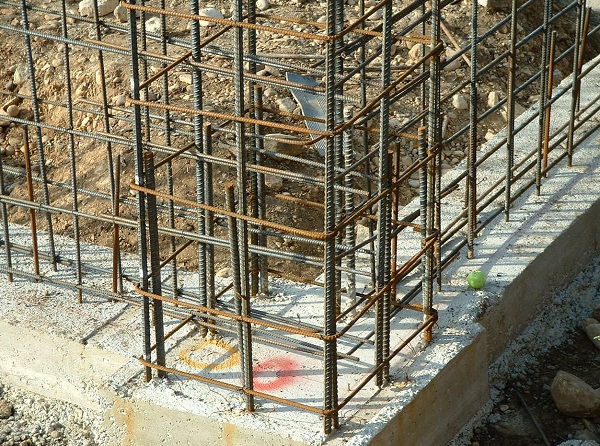 The design of concrete structures often uses high safety factors because there are so many variables that can affect the strength of the cured concrete. Concrete that has less than its designed compressive strength after curing can be the result of improper proportions of coarse or fine aggregate, Portland cement, and water; freezing temperatures during curing; contaminated water; soil or plant particles mixed with the aggregate; or improperly processed Portland cement.

Modern Portland cement is a fine powdery material consisting principally of compounds of lime, silica, alumina, and iron. It is manufactured under closely controlled conditions by mixing limestone or marl with other ingredients like clay, shale, blast furnace slag, or fly ash (a by-product of coal-burning electrical generating plants); burning the mixture into clinker in a rotary kiln at a temperature of 2,700 F°; pulverizing the clinker; adding a small amount of gypsum and other ingredients; and further pulverizing the mixture to the fineness of pastry flour.

Advantages of concrete as a building material include its production from inexpensive raw materials that are available locally; its noncombustible nature when exposed to the temperatures commonly found in structure fires; and its resistance to insects, moisture, and chemical attack from contact with soil.

Portland cement concrete’s primary disadvantage is that it has low tensile strength and must be reinforced to carry loads. This reinforcement is most commonly steel, which oxidizes when exposed to moisture and oxygen. Concrete can also be porous and develop hairline shrinkage cracks, which can admit moisture, which then accelerates oxidation of the steel reinforcement. When enough of the steel reinforcing has been turned to iron oxide, the increase in volume from the chemical reaction forming iron oxide can create enough internal pressure in the concrete to spall the surface (photo 3), which exposes the steel reinforcing to the effects of fire, which in turn rapidly weakens the concrete and can lead to structural collapse. 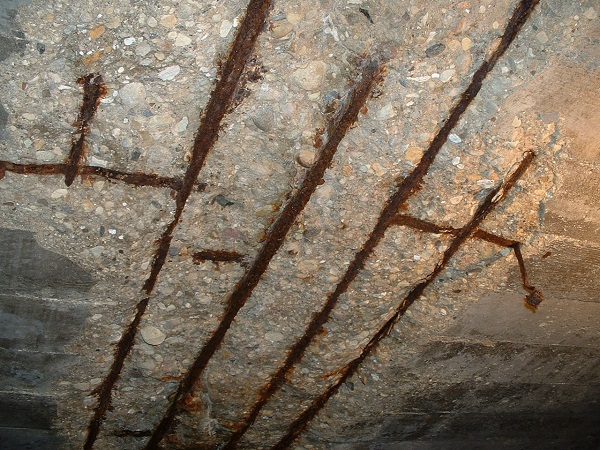 Modern Portland cement concrete in unprotected locations like bridges and parking decks has an effective life of 50-60 years. When protected from the weather and from moisture penetration that will cause the steel reinforcing to oxidize, it can have a much longer life.

The earliest use of concrete was by the ancient Romans, which they called opus caementicium, beginning around 200 BCE. This was often finished with brick or cut stone on the exterior of the structure and with plaster, stucco, tiles, or other materials on the interior. Despite earthquakes, volcanic activity, and centuries of war, many of these Roman buildings, bridges, and aqueducts still survive today—as long as 2,000 years after they were built—without the use of any reinforcement in the concrete other than large aggregate.

The Ten Books on Architecture, written by Vitruvius Pollio around 25 BCE, contain descriptions of Roman concrete construction as well as the preparation of the lime, cement, and aggregate. The Romans ground lime, pozzolana (volcanic ash), and sand between millstones like flour; mixed them in their proper proportions: One part lime to three parts pozzolana for structural concrete, and one part lime to two parts pozzolana for underwater structures, similar to the proportions used today. Aggregate was much larger than that which is in use today, sometimes as large as fist-sized stones.

Many Roman buildings were of concrete faced with brick both inside and out, with the brick being the form for the concrete. The bricks were not the rectangular ones with which we are familiar. They made brick for these purposes whose top and bottom faces had the approximate shape of the end wall of a one-story house with a gable roof. The bricks were laid in two parallel wythes with a space between a dozen courses at a time using sand-lime-pozzolana mortar with the flat faces on the exposed faces of the walls. After the mortar had set and cured for a few days, the space between the two wythes of bricks would be filled with concrete, which filled the spaces between the overlapping triangular protrusions of the brick on both sides of the wall, binding concrete to brick and making the brick an integral part of the wall.

After the concrete was set, another dozen courses of brick were laid on each wythe, and the process repeated. Photo 4 shows a modern example of this type of construction, except that the Roman brick were shaped differently and had no cores and would not have welded steel wire trusses between the courses to reinforce the brick before the concrete was poured. 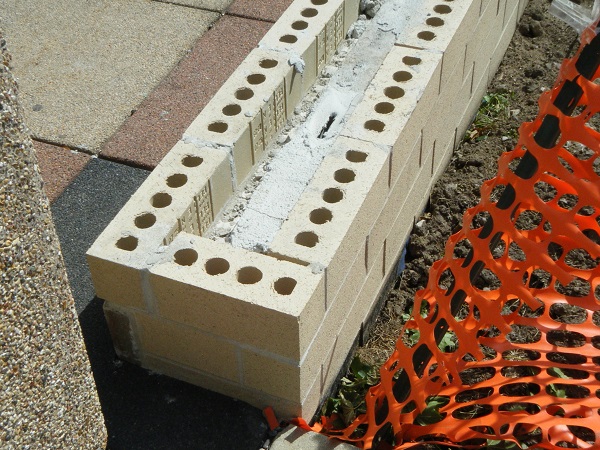 The Pantheon in Rome (photo 5) is an example of this type of construction. A cross-section of the concrete wall with its brick form is visible at the upper left. The Pantheon’s unreinforced spherical concrete dome (photo 6) is 143 feet in diameter, with an opening 19 feet in diameter in the center for light and ventilation. 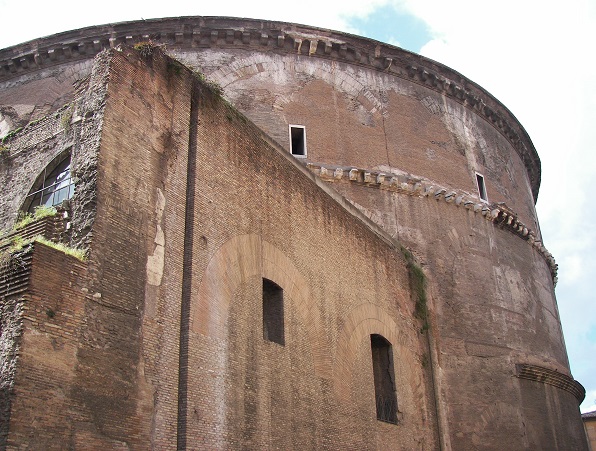 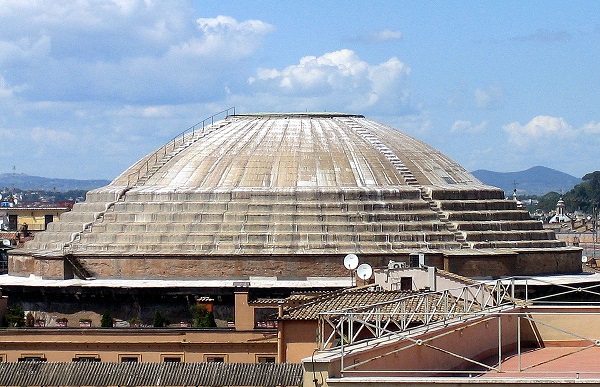 Builders and scientists have wondered for decades why Roman concrete seems so much more durable than modern concrete, with an effective life of at least 40 times that of modern concrete despite centuries of exposure to the weather and no maintenance.

Recent research suggests that the structure of the chemical bonds in Roman concrete is similar to the bonds in modern Portland cement concrete to which fly ash has been added, so the strength and durability of the Roman concrete must be because of other factors, including the following:

Research and experimentation beginning in the 1980s have been able to produce non-reinforced concrete as strong as that produced by the Romans and which may prove to be as durable. One of these projects was a dam in Utah, constructed in 1987 by the Bureau of Reclamation of the U.S. Department of the Interior. The concrete in this dam was made with a cement mixture of 40-percent Portland cement and 60-percent fly ash, which resulted in the same proportion of silicate and calcium compounds found in Roman concrete. In addition, the concrete was prepared using a larger proportion of large aggregate than is in current practice and little water to form “no-slump” concrete. This concrete was placed rather than poured in layers and compacted with vibrating rollers to consolidate it.

Further research and experimentation may result in concrete of the ancient Roman concrete formula being used in buildings and bridges. This dense and high-strength material may prove to be no more expensive than conventional concrete when used on a large scale, although it may prove to be a good place to recycle fly-ash, a waste product, and is likely to be as fire-resistive as conventional concrete.

For more information on modern and ancient Roman concrete, Internet search for: