History suggests that people do not often build their buildings, towns, and cities with the long-term goal of the life or property safety. Most building seems to be driven by short-term goals like convenience, shortened construction schedule, and reduced cost.

Rapid construction and low costs may produce acceptable results at the time of the occupancy inspection, but it can set the stage for future disasters like conflagration, structural collapse, and destruction by earthquakes or severe storms. After events like these, popular opinion forces public officials to react to these disasters by enacting laws to reduce the severity of future events. Despite the lessons of history, builders and their clients often comply only with the letter of the law, ignoring the intent of the law and the lessons taught by history; in the interest of economical construction, they set the stage for future disasters.

Our earliest recorded history is in the form of cuneiform tablets from Sumeria—today’s southern Iraq—dating before 3000 BCE. Some of these tablets include the earliest recorded building codes and laws. The Code of Hammurabi, King of Babylonia in 2100 BCE, includes statements from these Sumerian tablets that are designed to deter builders from poor design and shoddy workmanship. If a building collapse killed the owner’s wife, child, or servant, the builder’s wife, child, or servant would die. If the collapse killed the owner, the builder could be executed (Code of Hammurabi, Laws 229-232). Fines were established for lesser offenses and for those involving people of a lower social class. The accused was innocent until proven guilty. If the accusation proved to be false, the accuser would receive the same penalty that the accused would have received if found guilty.

Photo 1 shows the top section of the Stele of the Code of Hammurabi, on display in the Louvre Museum in Paris. 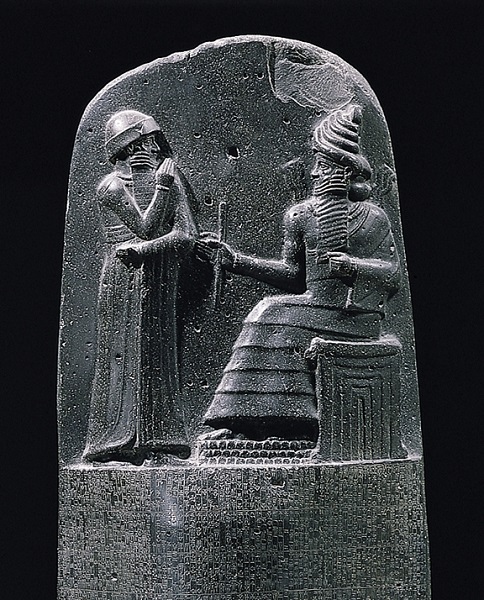 Over the centuries, our systems of laws have become more complex than at the time of Hammurabi; they have been further complicated by the development of statutes, ordinances, regulations, consensus standards, and legal precedent, all operated and driven by lawyers and judges. Insurance is also commonly used to transfer the risk of the building or the building’s ownership from the individual to a pool of individuals who share the financial risk for the bad things that could happen.

After a serious incident with loss of life such as the fire at Grenfell Tower in London England on June 24, 2017 (photo 2), the investigation continues more than a year later. Once the government and insurance investigators finish, there will be further delays before one or more trials, each involving one or more plaintiffs. The result will be a finding that the rapid spread of fire was from the use of a combustible cladding material oriented as vertical panels when it had been tested for combustibility and flame spread only in a horizontal position. And, the responsibility for this incident may be divided among the architect, engineers, and builders who installed the combustible cladding years ago as part of a building renovation; the building’s owners, the building and fire code developers, and the governmental agencies that approved the renovation under those codes. The fire department will probably also be named simply because they responded, even though at that time they were unable to cope with the results of bad decisions by others in the past. 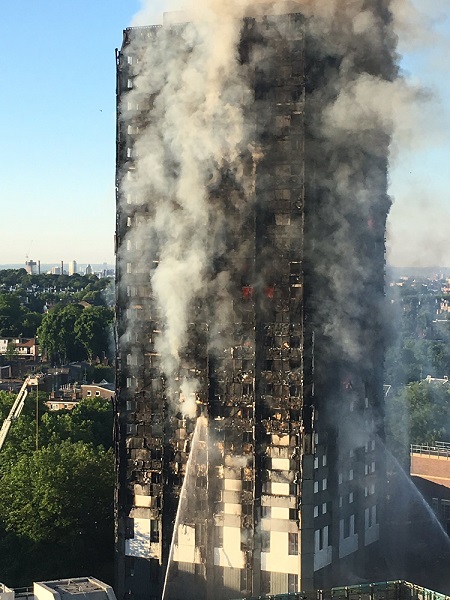 Ultimately, the responsibility should also be shared by those who did not educate the architects, engineers, and builders in the proper use of and interpretation of the fire resistance and flame spread test reports for the materials used. In the United States, the early efforts in development of building and fire codes were joint efforts between fire service leaders, insurance underwriters, and concerned public officials. Examples include the specification for “mill construction” published by the National Board of Fire Underwriters in 1880, the early editions of the New York City codes, and the building and fire codes adopted by the City of Chicago after the Great Fire of 1871.

More recently, the National Fire Protection Association (NFPA) has promoted a balance on its technical committees between the fire service, insurance underwriters, builders, and material manufacturers. Today, the insurance industry and the fire service are still represented on the technical committees that develop and approve the building and fire codes. However, even if these representatives vote together in a block, they are outnumbered by representatives of the other groups.

Of the 26 positions (not including alternates and nonvoting members) on the technical committee for NFPA 1, Fire Code, 2018 edition:

Of the 16 positions (not including alternates and non-voting members) on the Correlating Committee on Building Codes for NFPA 5000, Building Construction and Safety Code, 2018 edition:

Of the 372 positions combined (not including alternates and nonvoting members) between the many technical committees on occupancies and specialties for NFPA 5000, 2018 edition:

The Preface from the “read only” free access Web site https://codes.iccsafe.org/public/document/IBC2018/preface of the International Building Code (IBC) states:

“In order to ensure that organizations with a direct and material interest in the codes have a voice in the process, the ICC [International Code Council] has developed partnerships with key industry segments that support the ICC’s important public safety mission. Some code development committee members were nominated by the following industry partners and approved by the ICC Board:

The code development committees evaluate and make recommendations regarding proposed changes to the codes. Their recommendations are then subject to public comment and council-wide votes. The ICC’s governmental members—public safety officials who have no financial or business interest in the outcome—cast the final votes on the proposed changes.”

The IBC free access Web site https://codes.iccsafe.org/public/document/IBC2018 does not list committee or technical committee members. I suspect that the committee membership list is similar in composition to those for the NFPA codes and standards.

In every case, the remainder of the positions on the committee were held by architects, engineers, federal agency representatives, manufacturer association representatives, and third parties representing other entities.

Although the efforts of the NFPA to maintain a balance on its technical committees is commendable, the final votes on each committee do not give sufficient weight to the concerns of those who are tasked with the protection of the public’s life safety including municipal governments, fire departments, fire marshals, and insurance underwriters.

With the majority of the members on each committee representing interests other than public life safety, life safety no longer seems to be their primary concern. This sets the stage for incidents like Grenfell Tower in England and any other incident in which fire spread unexpectedly rapidly over vertical surfaces that had been tested as low flame spread in a horizontal position. It also sets the stage for the laws of physics to prove wrong the marketing and engineering manuals promoting the use of new, renewable, and sustainable products and components such as the use of combustible mass timber for load-bearing members in the construction of high-rise buildings.

Us and them must keep in mind that a combustible load-bearing assembly that passes a fire-resistance test in a laboratory can easily fail in the real environment of a fire in a modern building with petroleum-based rather than cellulose-based furnishings. In this case, the failure of one combustible component can lead to the collapse of the structure and the injury and fatality of building occupants and firefighters. The testing by UL’s Firefighter Safety Research Institute and the National Institute for Standards and Technology fire labs has demonstrated this failure and collapse potential.

It is also time for the independent testing laboratories to update the standard tests that are still being used to certify fire resistance of structural assemblies and the flame spread and smoke-generated ratings for interior building finishes in a horizontal orientation to include flame spread ratings for the same materials in a vertical orientation. It is also time for the development of a new standard time-temperature curve for these tests that will account for the higher temperatures and greater rate of heat release in today’s room-and-contents fires when compared to the present standard time-temperature curve from the cellulose-based room contents fires from previous generations.

Gregory Havel is a member of the Town of Burlington (WI) Fire Department; a retired deputy chief and training officer; and a 40-year veteran of the fire service. He is a Wisconsin-certified fire instructor II, fire officer II, and fire inspector; an adjunct instructor in fire service programs at Gateway Technical College; and safety director for Scherrer Construction Co., Inc. Havel has a bachelor’s degree from St. Norbert College, has more than 40 years of experience in facilities management and building construction, and presents classes at FDIC and other venues.