The great Crystal Springs dam near San Mateo.a suburb of San Francisco, Cal., the largest concrete structure in the world and the highest dam in the United States, has a site which cannot be surpassed. The tower terraces of the range of mountains, which start from the Golden Gate and traverse San Mateo county from north to south, here approach the lower bay of San Francisco, and their rocky canyons afford natural walls for inclosing the dam, which, as said last week, is built on a solid foundation on the bed rock. The 500 Hugh blocks of concrete, of irregular size and shape, which compose its face were each manufactured as follows: A frame work of various dimensions and irregular in outline, according to the snape of the block required, was built up at its proper place on the dam. Concrete was gradually dumped into this mould until it was at last filled. As quickly as this concrete was thrown in. it was carefully spread ou: aid rammed down with heavy iron rammers into a compact mass. The block was allowed to remain in the framework for several days, or until the moisture had evaporated, by which time it had become as hard as the rock upon which it s’oed. This method was followed with each block, not me of which was identical in shape. The 410,000 barrels of .-and (of which two were used for each barrel of Portland cement) were procured at North Beach San Francisco. Rock of the required density and strength was p ocured in unlimited quantities only a mile away from the dam from a quarry owned by the company. Of that rock when crushed 1,230,000 barrels were used. 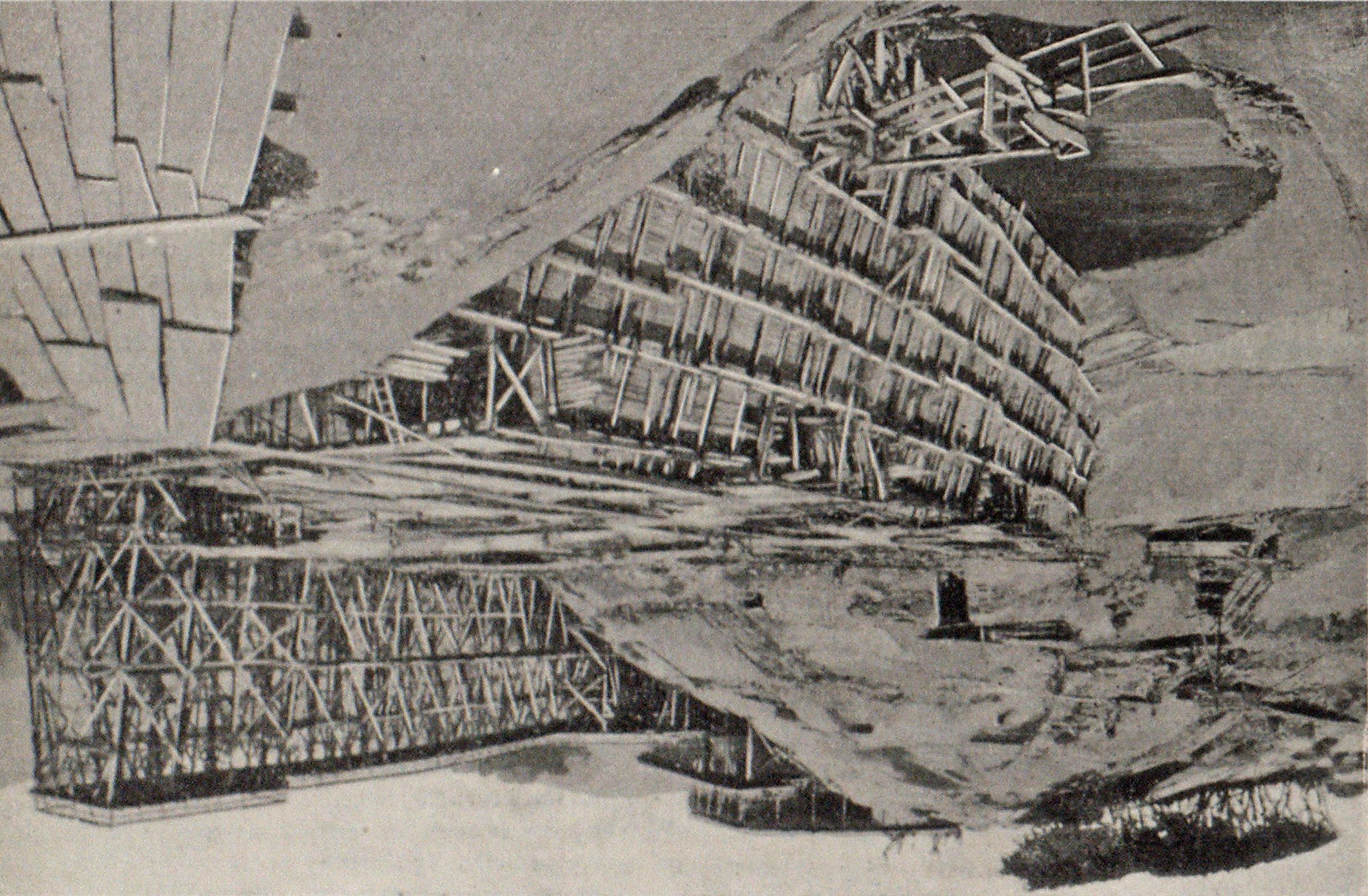 A GREAT artificial reservoir is being built about five miles west of San Mateo, a suburb of San Francisco, Cal. While it will be the largest concrete structure in the world and the dam will be the highest in the United States, the natural features of the locality are helpful to its erection. At the site of the dam, which is 145 feet high at present, there is a canyon, whose rocky sides rise to a height of over 209 feet above the creek, and, meeting within 700 feet, inclose a valley spreading out widely both ways, forming, with the dam, an artificial body of water nearly nine miles in length, which exercises a pressure of 130,000 tons against the face of the dam. To withstand this enormous pressure, this dam is being built of equally enormous dimensions. When complete, its base will be 176 feet thick; its full height, 175 feet; its length, about 830 feet. Its capacity will be 29,000,000 gallons.

The foundation of this dam is laid on bedrock—hard, blue, compact, fissureless sand stone. This has been hewn out (not blasted out) to a depth of from eight to thirty-five feet—no blasting having been employed, so as to avoid breaks or cracks in the bedrock, from which all the softer stuff has been cutout, and into which the foundations have been dovetailed. This foundation has been rendered absolutcly watertight by a trench seventeen feet deep, ten feet across at the top, and five feet wide at the bottom, which was hewn out of the rock base and followed the dam’s centre line down to the watertight ledge below. This trench, which was afterwards filled with concrete and heavily rammed, can be seen in the illustration accompanying this article in the hillside at the end of the dam. The bedrock was thoroughly cleaned and hosed, after which the concrete foundation blocks, averaging forty feet in length,thirty feet in width, and eight feet in thickness, were laid over the surface separately, each having niches and projections on its top and side. When these hardened, the spaces between them werefillcd in by a second series of blocks, so prepared that the niches and projections of the first series fitted accurately into the secondary blocks, forming perfectly watertight joints. Over these, again, was another layer of blocks, so placed that their centres came right over the junction of four of the former blocks. In all, 500 blocks were used, no two of which were identical in shape or sire, each interlocking one with the other, and all helping in the generai support. This feature in construction is unique, and by providing the due amount of elasticity there is no fear of damage by shrinkage.

The general view of the dam during its construction, which is given herewith, shows the mechanical devices used in transporting the concrete round the dam. On the first platform of the framework was a rock-breaker, which crushed the rock into pieces the size of a walnut. On the second were stored the sand and cement, of which a car holding two barrels of the former and one of the latter was run forward and its contents dumped through a chute into a mixer on the third platform below. Here the three materials were thoroughly mixed— the rock having first been washed and dumped through a chute into a large drum of iron holding six barrels 01 about twentytwo cubic feet. The water for the concrete was fed in due measure through a nozxle in the axle of the mixer. Three detached engines supplied the power from the lowest platform. After mixing, the stuff was carried in cars running on a trestle over the dam, where the last block was formed. Each carload was dumped on to a platform by means of being shot through a large pipe, whence it was taken in wheelbarrows into the frame on the dam site, where the block was to be fixed. The capacity of the concrete machinery was 450 barrels, or about 10,000 cubic feet daily. Of the best Portland cement 205.000 barrels were used; of sand, 410,000; of rock, 1,230,000 barrels.