One million and a quarter is the loss conservatively estimated on a fire which started at 3:30 o’clock a. m., and swept over two blocks of business property, bounded by Forsythe, Nelson, Madison and Hunter streets, Atlanta, Ga. The police and fire departments dynamited what was left of the ragged walls and at night half of the city’s firefighting force was still throwing water into a dozen razed structures. The origin of the fire is unknown. It started in the Schlessinger-Meyer company’s bakery, whence it spread in all directions until it reached the Terminal hotel, one of the largest in the city, and destroyed that. There were no casualties. The insurance is placed at $750,000. The fire was discovered in the elevatorshaft of the Schlessinger building, and is supposed to have originated from crossed wires running to the motor which operated the elevator. By the time the firemen arrived the flames had broken through the roof of this building, and, owing to light water-pressure, it was impossible to check their progress. In a short time the fire was eating its way through to Station B, of the city postoffice. Its employes by quick work managed to save all the mail and most of the equipment. Leaping across Mitchell street, the flames made short work of the Terminal hotel, the Terminal annex, Childs’ cafe and hotel and Childs’ annex, at which point the firemen succeeded in checking the advance on the north side of Mitchell street. On the south side, however, the flames continued to sweep everything in their path until Forsythe street was reached, destroying the buildings occupied by several large stores, banks and companies. The Schlessinger building extended half a block on Nelson street, and from it the flames spread to several small storehouses on Forsythe street, destroying three big establishments. A strong west wind scattered burning embers over the whole business section of the city, threatening for a time to cause even greater loss. The firemen were badly handicapped by falling walls, and had to haul their engines out of danger. Meanwhile high-power trolley and electric light wires were falling everywhere, parts of walls were dropping out. The men, however, though the fire was raging fiercely on each side of them stuck to their work until in Mitchell street the flames shot across the street from cither side, with walls falling everywhere. Finally, however, they had to drop their hose and run for their lives, as the last wall of the Piedmont Hat company came down, leaving burned a clear space across a whole square. 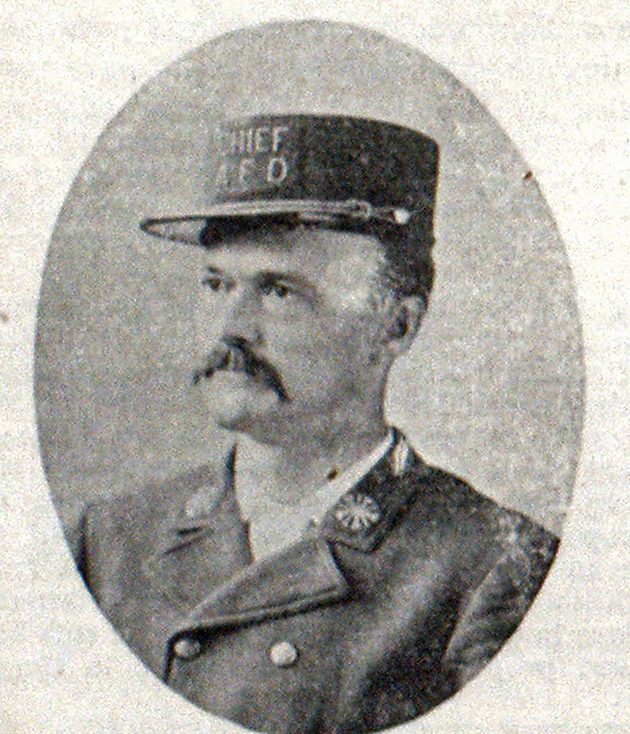 ON February 21 nearly an entire block in the wholesale district of Atlanta, Ga., was destroyed by an early morning fire, which caused a loss of $500,000, insured for about $450,000. The burned area is bounded by Railroad avenue and Decatur and Collins streets,

The fire started at 5:45 a.m. from an unknown cause in the Maddox wholesale grocery store, and was suddenly spread to all parts of the building by a tremendous explosion, presumably of oil and syrup. The flames, fanned by a high wind, soon spread to adjoining buildings, and were beyond control of the department fifteen minutes after the entire fighting force had been brought to the scene. The firemen were hampered by insufficient water pressure, and were kept away from the buildings by frequent explosions of kerosene, molasses, and powder in the different establishments. The explosions sent burning rafters in every direction and perceptibly weakened the fire walls in the big block, erected only four years ago. It was noon before the flames were brought under control, and the firemen did not leave the scene until night. The night watchman in the Maddox building left his post at 5 o’clock, one hour earlier than customary, having the permission (he says) of one of the firm.

Chief Joyner, on being interviewed on the subject of the fire and the scarcity of water, said:

The big fire is the strongest argument in favor of the municipal water bond issue. If we cannot have a thirty-inch water main across town, then God help the city in the event of a great conflagration. Never did I so fully appreciate the condition of the water system as when my men were engaged in the work of subduing the flames in the old Markham house block. Although there was a heavy pressure, the water pipes were so small that hydrant streams would hardly carry fifty feet. This was so short that to put water on the flames meant the sacrifice of the lives of all the men who might be required to go close enough to throw water on the burning buildings. I realized at once what we had to contend with, and hud my engines working for all they were worth. The w ork done was with the aid of only six streams, four of these being carried to the tower pipe, which, with the aid of two pumping engines, was able to throw a fine stream of water. The other two streams were backed up by the other engine. With the three engines working, the suction was so great that the hydrants in the vicinity were well-nigh worthless. When we reached the fire the Maddox building was a mass of flames, and had we had all the water in the Chattahoochee to pour into the building at one time the structure could not have been saved. In any part of the central business section of the city the fire department can use successfully only two streams under hydrant pressure alone. When more streams are added, the force and size of the streams decrease so materially as to make them practically worthless. If we should try to play six streams anywhere in the centre of the town without using our steamers, we could not throw water above the third story windows, and the stream would be too slight to do much good. We cannot employ more than three steamers, and we cannot run them at their highest power, because the water does not come into the mains in sufficient quantities. The steamers discharge the water into the hose faster than it can be taken in. This means that we are limited to six streams, no matter how big the Are, or how much the safely of the town may be endangered. In the department I have men and hose and apparatus enough to play twenty streams of water on a fire, if I could get the water, and twenty streams or twice that many would have been none too heavy for that Are. Six good streams pumped by three steamers not employing their fullest power represents the maximum capacity of the Atlanta fire department while the present inadequate water supply continues.