A spectacular five alarm fire that brought 29 pieces of equipment into action early on November 2nd virtually destroyed a four story building at Detroit, Mich., and did approximately $100,000.00 damage before the fire was brought under control. The building, located on 4th Street and Porter, lower downtown west side, was occupied by A. H. Nimmo Dynamo Company (the owner) on the first floor; the Juvenile Chair Mfg. Company on the second floor; the Detroit Overall Company, which were engaged in manufacturing Army overalls, on the third; and the Victory Bar & Mfg. Company on the fourth floor.

Flames were visible for miles, and thick smoke blanketed the lower downtown west side when first alarm companies responded. A Detroit Police Vice Squad Car, cruising in the district discovered the fire and turned in the first alarm from box 86, located at Michigan and Second at 2:28 A.M. This brought out Engines 8—1—3, Ladder 1—3, Chief

Forty thousand dollars worth of electric motors were damaged, according to F. A. Nimmo, President of Nimmo Electric Co.; 45,000 yards of overall material valued at $20,000 were consumed by the flames. The machines used in making the Army and Navy Coveralls were also destroyed.

No one was injured although the night watchman, William Cody, 70, narrowly averted being trapped by the flames, when he was rescued by Patrolman Milton Wagner and Arthur Lindow of the Detroit Police Department. The cause has not been determined, but is under investigation by the Detroit Fire Department’s Arson Squad. 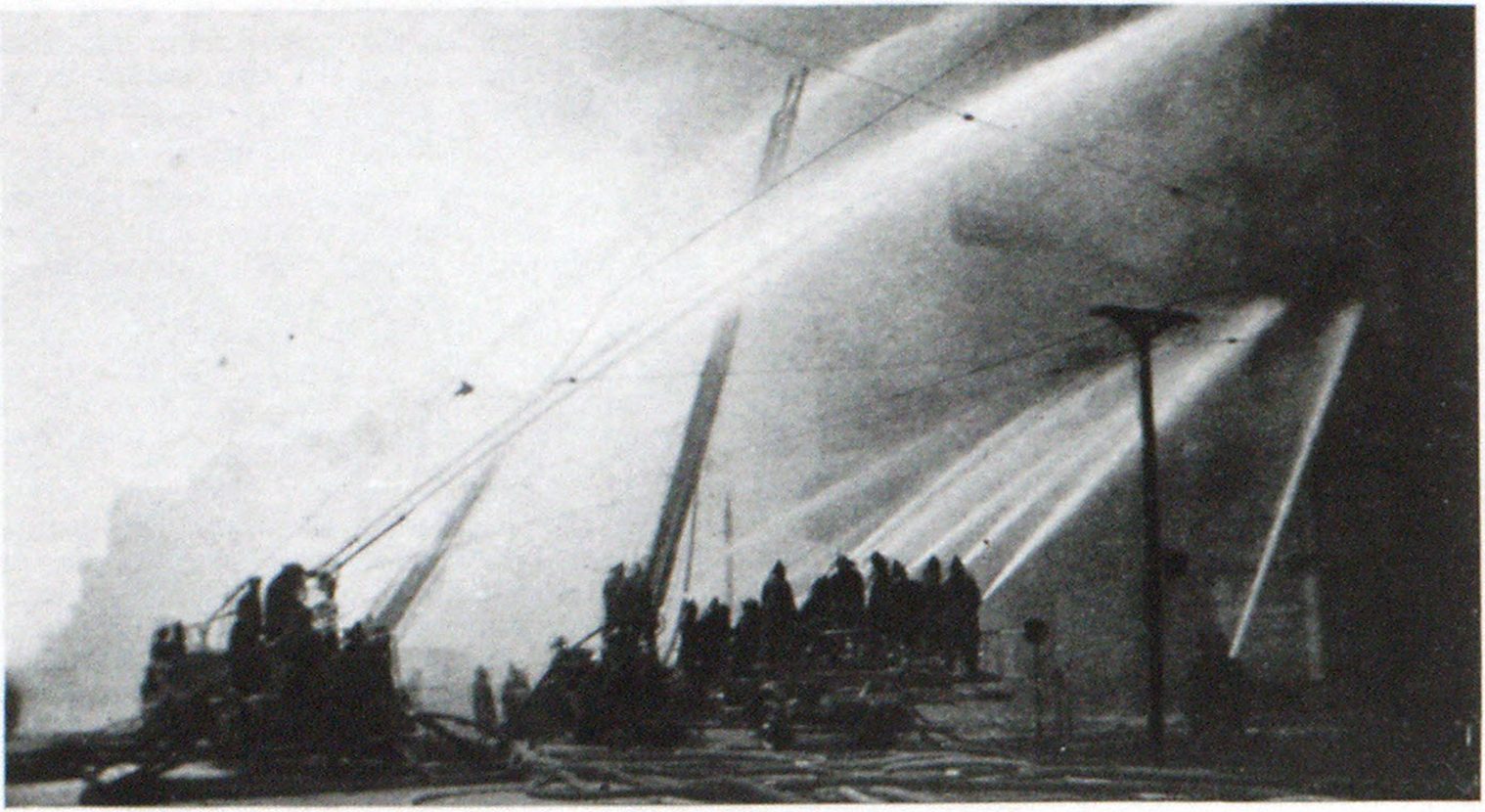 Fire was discovered on the second floor of a five-story building in the heart of Detroit’s wholesale district, West Jefferson near Woodward Avenue on May 10 at 3:50 a.m.

Fire, smoke, and water completely destroyed stock on all five floors. The buildings were occupied by wholesale tobacconists, glove manufacturers, and leather goods manufacturers. I-oss was estimated at approximately $300,000.

Heavy streams from the high pressure system greatly aided in bringing the blaze under control after four hours’ effort. It is believed 10,000,000 gallons of water w’ere poured into the burning structure. Much of the water gushed into open basements of adjoining buildings, causing a great amount of commotion until the later hours of the day.