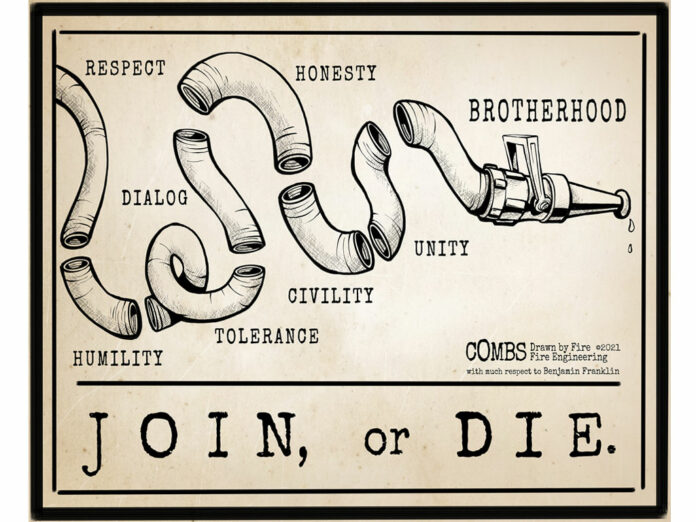 Commentary below by Bobby Halton

On May 9, 1754, Benjamin Franklin published a cartoon, much like the hoseline that Paul has drawn for us. Old Ben was sending a message to his peers and fellow citizens. In Franklin’s case, he was very concerned about a growing threat against the British colonies by combined French and Indian forces who were threatening their very existence. Ben hoped through his cartoon to illustrate the need for unity militarily amongst these seven colonies to combat this threat. Although Ben was successful domestically in gaining approval, the British government was not inclined to allow the colonists to create the military and political model Franklin proposed. The severed snake cartoon of Franklin’s was not completely original; the concept had been done before, but its meaning and its strength inspired several other versions for decades to come.

Franklin was hoping to unify people. He was using one of the most common techniques, a common threat. It is said that nothing unifies people more than a common enemy. We see it all the time where a person or a group is described in very specific ways to motivate people to either take action against them or subdue them in other ways. Franklin was operating in the political arena, and his motivation was self-preservation as well as the preservation of his fellow colonists and their way of life. As such, we can understand that motivation from him; we see it as justified and righteous. We also recognize that tyrants, dictators, and other evil players have also used that technique throughout history to gain power and control. Often, these tyrants do not have righteous or justified motives; they are almost uniformly narcissistic, self-absorbed ideologues bent on dominating people by destroying whatever political group, religion, race, or, in the case of the eugenicists, persons they held as being subhuman.

Paul’s severed line can only stay in service if we commit to the seven pillars outlined: Unity of purpose to protect and defend our community, its people and property. To be there in times of need, to always to the best of our abilities support one another in the completion of our mission. Civility, to agree to disagree, acknowledging others’ worldviews while at the same time holding fast to defending and promoting our own principles and those we share. Expressing our own worldviews with due consideration for the opinions and thoughts of others. Honesty, perhaps the most important pillar of all. It is said that the worst tyrannies of modern times, The Soviet Socialist Republic and the People’s Republic of China, enforced their tyranny by making their people say things that they knew were not true—by making their people knowingly lie, thus destroying their own self-worth. Honesty, we can never allow anyone to force us to say what we know is not true. Tolerance, not everyone will see the world as we do. A brilliant man once said, in matters of personal opinion, no one had to be wrong for him to be right and his being right did not make another wrong. Dialogue, the willingness to engage in meaningful and thoughtful conversation. The willingness to hear, not necessarily agree, with other’s points of view. Humility (perhaps our greatest strength)—sorry, old joke, but you get the point. Understanding the burdens and struggles of others for what they are and being understanding of the humanity of the individual. Respect, the practice of control, the habit of punctuality, the art of accommodation and the devotion to character. Respect for one’s self, one’s peers, concerns, positions, responsibilities, skills, limitations, and in all matters the dignity of the individual.

The world has been blessed to have had Ben Franklin; he set a high bar. We who would hope to meet that standard are blessed to have Paul Combs, who reminds us ours is a lifetime pursuit and one worthy of one’s full efforts and attention. 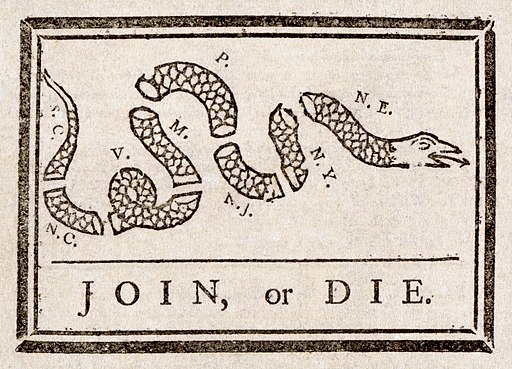 Join, or Die. by Benjamin Franklin (1754), a political cartoon commentary on the disunity of the Thirteen Colonies during the French and Indian War, later used to encourage the colonies to unite for independence during the American Revolutionary War. Source: Wikimedia

Drawn by Fire: A Disturbing Situation

Drawn by Fire: The Cadet Paperchain

Drawn by Fire: The Coward Constrictor

Drawn by Fire: Too Cool

Drawn by Fire: RING THE BELL!