The 29th Annual Conference of the Eastern Association of Fire Chiefs was held May 7 through 9 at the Hotel Sheraton, Rochester, N. Y. Chief Walter J. Adams and his Rochester staff drew warm praise for the excellent conference arrangements.

A highlight of the three-day program was the demonstration of training and fire fighting at the Rochester Fire and Police Academy. A class of 22 rookies displayed their proficiency under the direction of Deputy Chief John F. Hurley. An inspection of the Maintenance Shops followed with Deputy Chief Louis E. Vogt in charge.

Prior to adjournment, an invitation to hold the 1957 Conference in Baltimore, Md., was extended by Chief Michael H. Lotz. The assembly voted to accept.

The ladies in attendance were treated to a full program of activities including a fashion show and a bus tour. 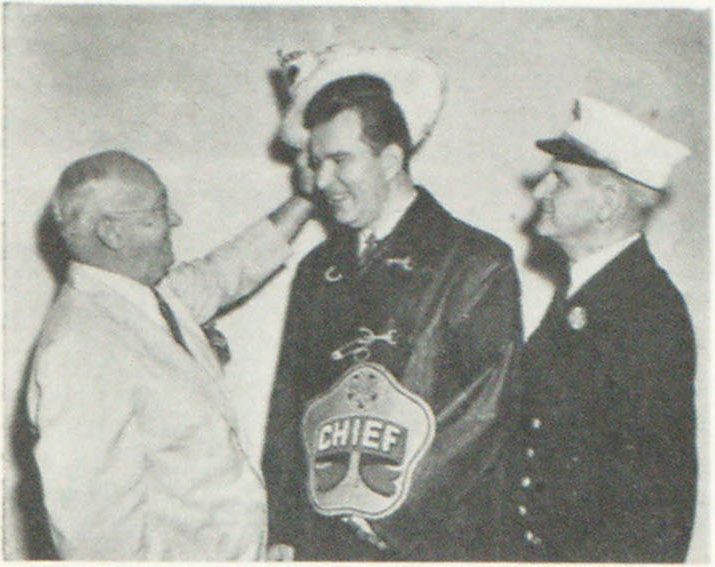 The gathering, which included 356 registered members, with perhaps again that number of guests, was timed to dovetail with the 74th Annual Conference of the International Association of Fire Chiefs, which opened the following day.

The conference was called to order by Chief William G. Wandras, President. Following the invocation and the singing of the national anthem the members were welcomed to the city by Deputy Fire Commissioner Harry M. Archer, for Fire Commissioner Frank J. Quayle, who was unable to attend. “Doc” Archer, who numbered many friends among the chiefs, spoke of the good old days and felicitated the delegates upon their deliberations.

The reply to the Commissioner’s address of welcome was delivered by former Chief of the Arlington works, Charles Greenfield, of Arlington, N. J. After this came routine business of the conference and the first business address of the day by Herbert A. Friede, who described the “latest development in radio fire alarm communication,” a new device which serves much the same as the conventional corner fire alarm box but transmits its signal by radio rather than by wire circuits, at the same time sounding warnings for alerting the nearest law officer.

The address “Today’s Problems in Selling Your Fire Department” by Chief Roi Woolley, Assistant Editor FIKK ENGINEERING, was deferred in favor of Mr. Friede’s demonstration. It will be included in the printed proceedings of the Convention.

An amusing interlude in the conference came when, with appropriate ceremonies, Mr. John A. Fcnchen, General Sales Manager of the Hotel Pennsylvania (Convention Headquarters), was duly initiated into the fire service and presented with the “badge,” and other regalia of a full-fledged fire chief.

Two further papers were discussed in the afternoon session; one had for its subject the “Importance of Inspections by hire Departments” and this was handled by Leon Watson, Newark Schedule Rating Bureau. The other, delivered by Hubert Walker, Manager, M. F. A. Sales Engineering Department, American-LaFrance-Foamite Corp., Elmira, was captioned “What Firemen Should Know About Ladders.”

Chief Wandras recounted the progress of the Association in his President’s address, following which there were the customary committee reports, reading of resolutions and the simple memorial services for the deceased members. Prayer was delivered by Rev. Frederick R. Frohnhoefer, S.J., St. Francis Xavier’s College, New York City.

How Firemen Can Aid in the Reduction of Arson