On Wednesday, June 29, 2011, Boca Raton (FL) Fire Rescue Services (BRFRS) units responded to a reported structure fire. The 911 caller, a female homeowner, reported that lightning had possibly struck her home. When she went to check unusual noises coming from her laundry room, she found light smoke in the room. She then called 911 and exited the home with her children.

Standard response for a residential structure fire in Boca Raton included two engines, a truck company, two medic units, a battalion chief, an EMS captain, and a special operations unit. Weather conditions were cloudy and humid, with intermittent rainstorms and temperatures in the upper 80s.

On arrival, the first-arriving unit [Battalion Chief 1 (BC 1)] established command and met with the homeowner. She stated that her oven appeared to turn on by itself, followed by noises and light smoke coming from the laundry room. The homeowner also stated that an overhead electrical service wire had fallen into the pool at the rear of the home on side C because of wind gusts during a prior rainstorm (photo 1). BC 1’s size-up confirmed the power line down in the pool and smoke emitting from the electrical service box mounted on the wall of the home on side D. No flames were visible in the laundry room or on the exterior of the home.

The incident commander (IC) ordered the first-arriving engine company to secure the power to the home. The company officer reported that after they shut the breakers at the main electrical service box, the home was still showing signs of being energized; lights were still on, and a radio was still playing. Further examination of the main electrical service box by crews using a thermal imaging camera also showed signs of excessive heat in the box and paint bubbling in the surrounding area.

At this time, the local electrical utilities company arrived to assist in securing the power. After receiving a report from the IC, the utilities representative suspected there may be a secondary source of power feeding the home. However, the homeowner was adamant that this was not the case. As a result, the utilities representative cut the overhead electrical line providing service to the home. Interior crews reported the home still showed signs of being energized. Only after deenergizing the main overhead transmission lines that served all homes in the area were crews able to deenergize this particular home.

Crews then opened up the main electrical service box and the surrounding wall area (photos 2-5). They found that excessive heat from the electrical energy in the box had been conducted to the wire lath in the wall’s stucco and to the wood two- × six-inch wall framing members, leading to a smoldering condition. The smoldering members were extinguished without incident or injury. 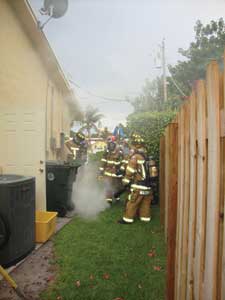 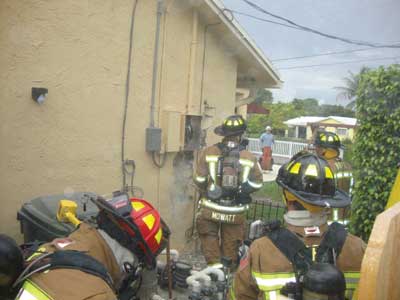 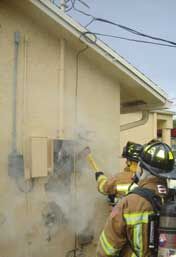 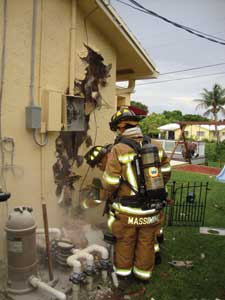 Subsequent investigation revealed that, although the portion of the power line that had fallen in the pool should have been deenergized because of the layout of the power distribution system, it was still in contact with live lines and, therefore, still energized. The investigation team, comprised of fire inspectors, building department officials, and electrical utility company representatives, concluded that the energy being delivered to the pool through the down line was sufficient enough to energize the structural steel in the pool shell and the pool deck. Energy was then back-fed into the home through the pool’s grounding system, which tied back to the home’s main electrical service box.

Although this call was safely concluded without incident, the potential for injury to responding personnel was great. The details of this call illustrate the complexity of electrical energy and emphasize the importance of implementing sound incident management principles on all emergencies.

In this case, a thorough size-up by first-arriving units enabled crews to ascertain and confirm pertinent information including the presence of the down power line in the pool. This information was a critical factor in the management of the incident and could have been missed without an effective size-up.

By exercising good situational awareness, interior crews determined that their initial efforts to secure the power to the home by turning off the breakers were unsuccessful. Had interior conditions been worse on arrival, heavier smoke or fire may have prevented crews from realizing the home was still energized. The potential to overlook such a hazardous condition demonstrates the need to confirm the effectiveness of all actions taken to maintain safe operations.

In addition, by maintaining a safe working pace and seeking the assistance and expertise of power utility company representatives, the IC and his crews were able to methodically and safely conclude this incident.

JOSEPH MAJHESS JR. is a 22-year member of and safety officer for Boca Raton (FL) Fire Rescue Services (BRFRS). He is a former BRFRS captain.