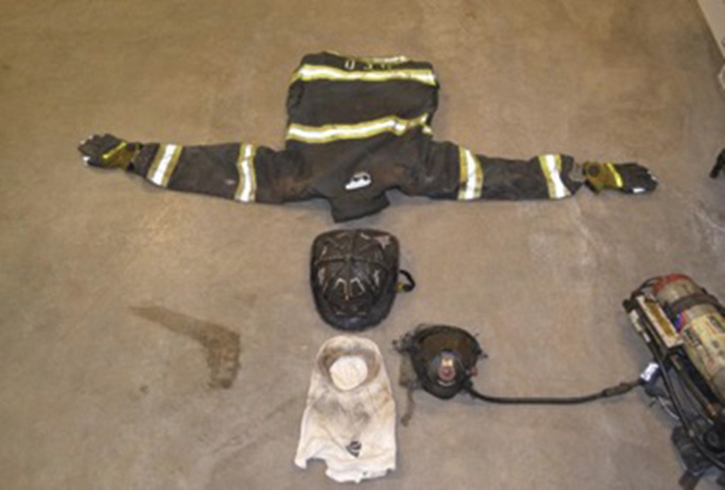 As a deputy chief functioning as the incident commander (IC), I was often asked to complete a post-incident analysis and after-action report for significant incidents. At one particular incident, a working fire that occurred at 9 Carpenter Street on August 23, 2015, a firefighter suffered minor injuries during the course of suppression operations. After conducting a thorough examination, it was determined to be primarily caused by the introduction of thermal hoods into the personal protective equipment (PPE) ensemble and the subsequent behaviors that followed their use. 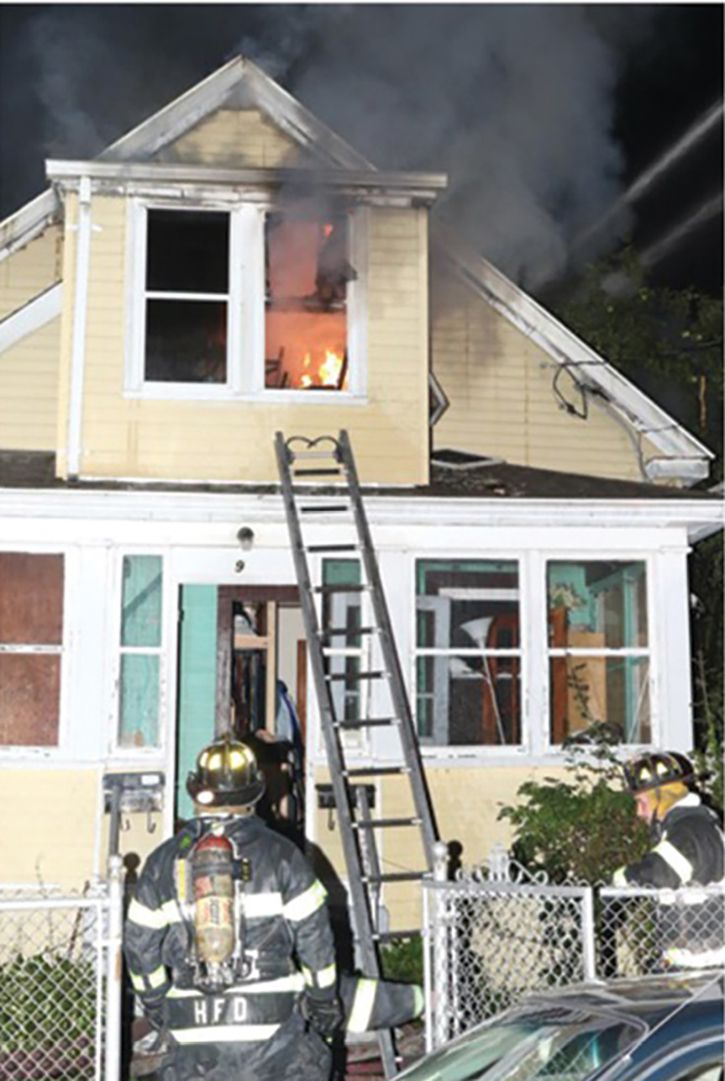 At 2358 hours, a box alarm assignment was dispatched at the aforementioned address for a reported structure fire; the assignment consisted of three engine companies, two ladder companies, a rescue company, and a chief officer. Dispatch stated that fire was coming from an air-conditioning unit on the second floor. On arrival, companies reported fire showing from the second-floor dormer on the delta side of the structure and initiated an interior attack (photo 1). As the IC, I was not satisfied with the progress and transmitted a second alarm at 0025 hours, resulting in the dispatch of three additional engine companies, a ladder company, and an additional chief officer. I also revised my original incident action plan (IAP) and ordered the companies to transition to a defensive posture. The crews knocked back the main body of fire and immediately reentered the structure to complete extinguishment and overhaul. A comprehensive review of all aspects surrounding the incident revealed several key factors, categorized as strengths and weaknesses.

Policies executed as designed. The department’s directives provided firm strategic and tactical guidance for structure fire operations and were adhered to by all personnel throughout the incident.

PPE ensemble performance. One firefighter suffered only a minor burn to his finger from the initial (interior) operations. The firefighter’s PPE ensemble sustained significant damage from the hostile conditions encountered: the turnout gear, fire-/heat-resistant hood, helmet, and self-contained breathing apparatus (SCBA) all received extensive thermal damage. If not for properly wearing the ensemble, the firefighter surely would have sustained significant injuries.

(2) This is part of the personal protective ensemble worn by the injured firefighter.

Command structure. The department’s command structure is designed to account for and protect all personnel operating at an incident. Another chief officer on scene and I ensured that accountability and oversight were in place throughout the duration of the incident, using a risk analysis model to monitor progress and revise the IAP to address rapidly changing fireground conditions. As conditions warranted, crews methodically evacuated the structure and command conducted an immediate personnel accountability report (PAR) roll call.

Transitional strategy implementation. Companies initially made an aggressive interior (offensive) attack to contain and control fire volume. The initial efforts, however, were ineffective in achieving knockdown. The revised plan to evacuate the structure and transition to a defensive operation facilitated the companies in quickly obtaining control of the fire. This was followed up with a subsequent secondary interior attack that proved adequate and successful.

Personnel stressed from previous incident. Most personnel at this incident operated at another working fire approximately four hours prior (2028 hours). High temperatures and humid weather conditions impacted crew endurance and, coupled with the previous strenuous activities, may have impacted crew effectiveness. This fire’s magnitude, however, was not significant enough to deploy the thermal hoods during suppression evolutions.

Water supply issues. Two separate engine companies reported dead hydrants while initiating water supply operations, which forced companies to seek alternate hydrants and slowed suppression activities until a positive water supply was established. Additionally, the water mains in the area are all eight inches or smaller in diameter and the additional flow requirements needed for suppression operations proved to be inadequate.

Building construction features and configuration. The structure was a legacy construction, wood-frame, 1½-story multiple dwelling with a gabled roof that had dimensional-lumber beams, rafters, and joists as structural elements. Based on city records, the building was constructed as a single-family dwelling in the 1920s and, sometime prior to 1999, was converted into a multiple dwelling with units on the first and second floors. Access to the second-floor unit was added by a staircase off the enclosed front porch. The resulting travel path consisted of several acute pinch points. This access was used by the first-due companies and ultimately hindered the initial interior operations because of the location, position, and narrow dimensions of the stairwell—causing a bottleneck for personnel and attack lines.

Attack line deployment. The stairwell configuration and the resultant logjam condition that ensued played a direct role in the ineffectiveness of the initial attack line, yielding flow rate and advancement issues. The training and situational awareness of these crews were also contributing factors to the situation.

Portable radio communications. Hydrant personnel are often left at a hydrant some distance from the fireground and use portable radios to receive orders to open the hydrant. Similarly, the pump operators are instructed to charge attack lines through the use of the portable radio by the company officer. Often, personnel can become anxious and use the portable radio to ask if the pump operator or company officer would like the supply or attack line charged. Additionally, transmissions from second-alarm companies setting up exterior operations serve only to compound the situation. The unnecessary radio traffic that was present at this incident tied up the incident channel, preventing critical messages from being transmitted. Although reliable communication is a key to effectively and safely managing emergency incidents, ill-timed or unnecessary transmissions impede ICs from receiving and acknowledging Maydays, urgent transmissions, updates from interior crews, and other critical messages regarding the changing conditions.

Recent addition of hoods to PPE ensemble. Although the proper wearing of the complete PPE ensemble at this incident prevented at least one firefighter from receiving serious thermal injuries, further analysis and personal testimony of the crew involved, however, indicated the addition of the fire-/heat-resistant hood led to the actions leading up to the event and caused the injury.

The department added these fire-/heat-resistant hoods to the required PPE ensemble on July 27, 2015—just one month prior to the incident. Personnel received classroom instruction and live-fire training in a controlled environment, prior to implementation of the mandate. The Carpenter Street incident was the first working fire in which the hoods were used on a departmentwide basis. Prior to this fire, personnel relied heavily on their exposed ears and neck to determine if conditions warranted evacuation or whether to push farther into a structure during interior operations. Eliminating this sensory indicator requires personnel to use other sensory input and indicators for evaluating interior conditions and maintaining situational awareness. 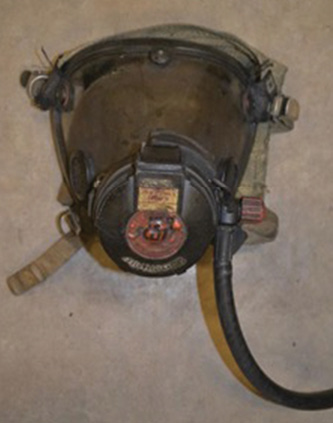 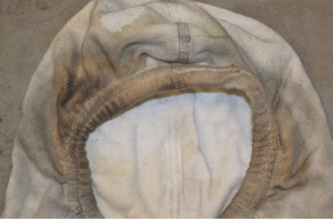 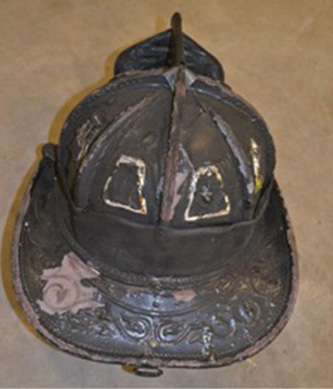 (3) Note the blistering of the SCBA regulator and face piece. (4) A close-up of the scorching at the right temple area of the fire-/heat-resistant hood. (5) The thermal insult damaged the finish and the reflective material of the injured firefighter’s helmet.

At this incident, fire conditions had begun to thermally degrade the PPE ensemble before the (injured) firefighter was able to recognize and react to the rapidly deteriorating conditions. Crews must use thermal imaging cameras and read the smoke conditions to monitor the environment and the fire conditions and maintain an appropriate level of situational awareness. Consciously using this process, however, takes extensive training and discipline, especially for less experienced personnel.

As the IC, I ordered all companies to evacuate the building to initiate a [temporary] defensive attack to knock back the main body of fire from the exterior. As the PAR was concluding, the injured firefighter and his crew came up to me at the command board to verbally report their safe evacuation from the building. I looked over at the injured firefighter, who looked completely disheveled: His turnout coat was smoking and he was patting himself with his gloved hand as if to snuff out smoldering pieces of his turnout coat, creating puffs of wispy smoke. I asked with bewilderment, “What the hell happened to you?” He responded with a description of the events that had just unfolded.

Once reaching the top of the narrow stairwell that was used for the initial attack, the crew encountered moderate smoke and a glow of fire at the second-floor landing. Because the crew could not accurately read the thermal conditions within the environment, they pushed forward toward the glow. On doing so, they immediately encountered an obstacle, a pool table, at the top of the stairs in the front room. Seeing no other way to enter this dwelling and get a handle on the fire, the injured firefighter decided to crawl across the top of the pool table to advance the line, placing himself even higher up in the superheated environment. Once they were beyond the obstacle, and with the fire free-burning, operating temperatures quickly rose beyond the limits of their turnout gear and the single 1¾-inch handline. Within seconds, the firefighter instantly realized his gear was rapidly failing and an emergency evacuation was required. The extremely narrow staircase hindered the quick deployment of a second backup line, which further contributed to this situation. Although the crew safely evacuated without delay, the injured firefighter still suffered a minor burn to one finger where his glove had failed.

Fire departments must continue to improve their delivery of services and ability to maintain safety through consistent, realistic, aggressive training evolutions and education programs. As a less experienced workforce becomes the trend resulting from a reduction in fire duty and attrition, this becomes even more critical. Coupled with a stringent accountability system, these actions can improve the quality of service provided and reaffirm a commitment to public and firefighter safety. A cultural paradigm shift centered on high performance is the fundamental key to individual and organizational improvement. Although technological advances and the addition of new equipment can be a tremendous benefit to safety and performance, their implications and any necessary precautions must be fully identified and understood. Fireground failures and operational inadequacies can be addressed through such proactive measures, but there is no substitute for experience. Organizations must place value on fireground experience and ensure that it is shared and preserved for generations to come.

LEIGH H. SHAPIRO, MS, retired as deputy chief from the Hartford (CT) Fire Department after 28 years of service. He has numerous degrees and certifications. He operates a fire service consulting firm, is an adjunct academic professor and instructor, is a contributor to Fire Engineering, and is a presenter for FDIC International 2020.