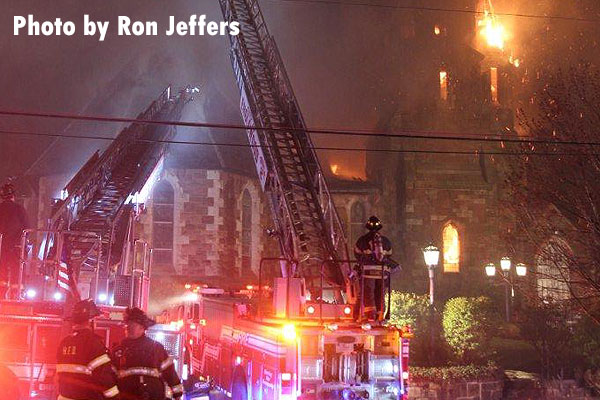 Flames rose above the First Presbyterian Church of Englewood (NJ) on the evening of March 22nd just days before Good Friday and Easter Sunday. Fire consumed the sanctuary section of the Gothic building that sits on a four-acre site.

Around 8 p.m., city firefighters were dispatched to an activate fire alarm call for the church at 150 East Palisade Avenue. This was followed by a telephone report of a fire. Arriving units found heavy fire showing and a second alarm was transmitted, quickly followed by a third alarm. Flames broke through the roof of the structure as master streams were set up. A tower ladder, ladder pipes, and deck guns surround the fire.

A large section of the church’s roof caved in and the steeple was damaged. Several stained glass windows were broken, but the brick structure appeared to be intact.

The structure was built in 1870, according to sources, and had been expanded and remodeled over the years. A dumpster was located on the East Palisade Avenue side of the building, indicating current renovation work. The church, established in 1860, was the first Presbyterian congregation in Bergen County.

Pastor Richard Hong watched from across the street as firefighters battled the blaze. He said he was grateful for the outpouring of support he was receiving and was grateful for the firefighters. “I just want them to be safe,” he said. Plans were started for Easter Sunday services at a different venue. A local synagogue was being looking into as a possible alternative. The section of the structure where Sunday school classes are held appeared to be sound.

Mutual aid fire companies that operated at the scene came from Hackensack, Teaneck, Tenafly, Bergenfield, and Leonia. There were no injuries reported during the fire, according to Englewood Deputy Chief Eric Enersen.