IN connection with the laying of the intake a brief description of the manner of joining the pipes and placing them in position will not be uninteresting. Close to the water’s edge were placed several timbers, a number of them lying level on the ground, so placed that they would give a uniform support to the six joints of pipe that were to be united into one section; the other timbers being so inclined as to form a way for the launching of the section. On the inner portion of the plankless platform was stretched a wire cable, for the purpose of carrying the molten lead which was used in uniting the pipes. After six pieces of pipe hud been rolled on to this platform the spigot-ends were inserted into the bell-ends of their opposites, when the ordinary lead joint was made, and, after having been thoroughly caulked, these six pieces formed a section that was as rigid as though it were a single casting. The sections averaged 72 1012 feet in length and averaged in weight 31 1-2 tons. The spigot-ends of each section having been slightly tapered in a lathe at the foundry where they were cast, were inserted into the bell-end of the preceding section and a lead joint made, after which the spigot-end was withdrawn, leaving the lead gasket or packing in the bell. After both ends of the section had been dosed, it was launched, buoyed by casks and floated to a position directly above its intended bed under the water of the bay; then by removing the cap from the spigot-end enough of the casks were detached to permit the section to sink sic wly. The spigot-end of one section was then drawn into the bell end of the preceding section by threaded rods or drawbolts with sufficient force to compress the lead gasket. The final formation of the joint was jierformed by a diver under water, Frequent tests of the intake were made to know whether or not the joints were tight. This was done by lowering the water in the intake at the manhole, which is situated near the 60-inch valve.

If the water rore. a leak was indicated, while the time required for it to return to its normal elevation showed whether the leak were large or small. This section of Intake No. 2 makes the longest line of submerged 60-inch cast iron pipe in the world, which, with a standpipe whose elevation of 259 65 feet above the zero level of the bay is the highest any where, causes the Erie water works to have some things of which no other water works can boast. The standpipe connected with these water works was built in 1868; the metal part was constructed and put in place by the Erie City Iron Works of that city. Its dimensions are 5 feet interior diameter, and between it and the inside of the brick work is a space of 2 feet 3 inches, in which is a spiral staircase, from bottom to top of the masonry work. The masonry at base is five feet 3 inches thick; it is of stone, a regular octagon in shape and is 20 feet high. The next fifty feet is of brick, also octagon shape, and then comes a belt of stone from which upwards the brick work is circular—all the brick work has been plastered and this jiainted. The brick work on the top of the belt of stone is 36 inches thick, gradually tapering towards the top. The metal at the base is 7-16 inch thick.

The cuts this week show pipe in the yard at harbor; the io-inch cast iron pipe (lying in dock ready for use); pipes joined, ready for launching, method of drawing together and securing the slip-joint, a profile, illustrating the line of the intake pipe, and a portrait of Mr. William Himrod, secretarytreasurer of the board of commissioners. 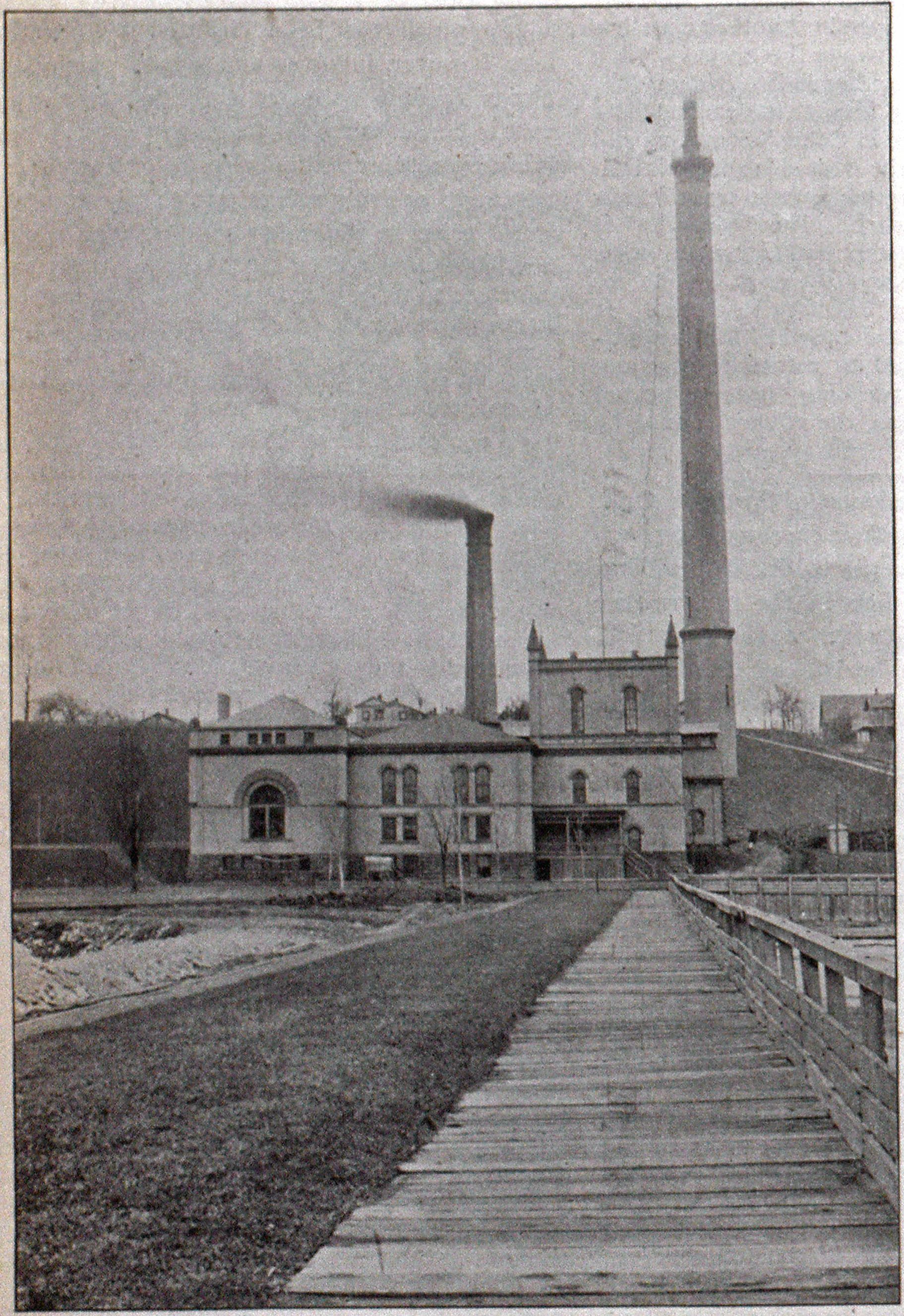 ERIE, Pa., is a lake city of no small importance, ranking as seventy-third in the list of American cities, with a population in 1890 of 40,634 souls. It is a great business centre and, as a lake port, forms one of the chief entrances for the great Eastern canal traffic. In the not remote future it will undoubtedly be connected with Pittsburgh by a direct canal system; at present the Pittsburgh and Erie railway performs part of the work of carrying coal and other materials, as well as grain, iron castings, and the like, that such a canal would perform more economically. As a business centre,and, therefore, as the centre of a large population, Eric is bound to increase, and, as a summer resort, it still holds its own,notwithstanding the large facilities for reaching others which fashion has rendered more popular. With a view to making Erie in every way a perfect place of residence and a still more desirable location for commerce, the water works commissioners of the city have gone to considerable expense to obtain a supply of pure water for domestic purposes, with abundance also for manufacturing purposes and tire protection —the last two particularly being very carefully seen to by the commissioners, who this year are as follows: William Hardwick (president), T. W. Shacklett and Clark Olds. 1 he officers are: Secretary, and treasurer, William Himrod (member of the American Water Works Association); clerk, M. L. Whitley; Chief engineer, F. A. Roth.

During the past year these commissioners have expended on construction $97,007.71, the largest item in that department being the amount spent on Intake No. 2, which, if found necessary, is planned to go across the harbor, through the Peninsula, and out into Ihe open water of Lake Erie—the source of the city’s water supply. For this intake cast iron pipe has been used, to be extended to a point in “Rig Bend,” 8,200

feet from engine house No. 3, which is about 2,600 feet south of the south shore of the Peninsula, in 21 feet of water with 13 1-2 feet of water over the crib where the water enters the intake. Mr. Walter P. Brough, C. E., was put in charge of the construction of the work, he having made the preliminary survey. According to the plans and specifications for the pipe and specials, each piece of pipe was to be 22 feet 5 inches long over all, including bell and spigot, 60 inches interior diameter,and 1 15 16 inch thick, to weigh approximately 10,200 pounds after being coated— a variation from the approximate weight of 3 percent, being allowed.

Each piece was to be subjected to a water-pressure of 200 pounds to the square inch and while under that pressure was to be well and thoroughly hammered. The approximate weight of the pipe required was 3,523 tons of 2,000 pounds each. The contract was awarded to Addyston Pipe & Steel Company, of Cincinnati,the lowest bidder at $18 the net ton Within six months that firm had delivered 680 pieces of straight pipe and 7 specials, amounting to 7,202,213 pounds and 3,775 respectively—a total of 7,205.988 pounds, at a cost of, for pipe $64,819.92, and for the specials, $365—total, $65,184.92. The actual weight of the pipe and specials exceeded the approximate weight by about 2 I 4 per cent.—a very small variation.

The plans and specifications fordoing the work required the excavation of a trench through rock, clay, and other material to be met with in the bottom of the bay, to a depth and of a width to permit the laying of a 60-inch cast iron pipe to the line and grade, as shown in the plans, which also prescribed that the work should begin at the south end of the proposed intake, close to the pumping station, and to extend northwest, a distance of 8,200 feet. The bidder for this w’ork was to state what kind of joint he was to use under water and to hold the commissioners harmless from all infringements, etc. He was to set in place the 60-inch valve, furnish brick and build the valve-chamber, the same to be located at the south end of the work. The contract was awarded to Thacher & Breymann of Toledo, O., the lowest bidders at $6.30 per lineal foot.

Our illustratiqns this week show the work of excavating through the lawn, with the dredge in the distance; the reservoir, the embankment of the reservoir, and the pumping station. In the last are four pumps.

Nos. 1 and 2 are known as the Cornish Bull pumps. The diameter of each pump is 20 3-4 inches, and each has a stroke of 10 feet. The capacity of each pump is estimated to be 165 gallons to each stroke. The Pump No. 3 is a Gaskill horizontal, compound, pumping engine, having two h. p. cylinders, 21 inches in diameter, two

h. p. cylinders 42 inches in diameter, and two pumps 19 1-2 inches in diameter, and all 36-inch stroke of a guaranteed capacity of 5,000,000 gallons daily at a piston-speed of 120 feet per minute against a head of 260 feet. In this connection the commissioner’s report on the new Worthington 12,000,000gallon pumping engine, installed in 1893, is interesting. It says; “The pump has met our most sanguine expectations in every particular. The city is to be congratulated on having so fine a piece of mechanism in its possession.” The reservoir, whose capacity is 35,000,000 gallons is nearly two miles from the pumping works, the bottom of which is 210 feet above the surface of the bay, and the water has been maintained during the year at an average depth in the reservoir of 25.10 feet.