VOLUNTEER firemen served out their day in Steubenville and did their duty faithfully up to January 5, 1886, when the paid fire department was organized. The immediate cause of the change was the destructive United States hotel fire on March 9, 1885. followed by two others within the year. At the first of these fires Alexander Bickerstaff, a volunteer firemen with a biilliant record for pluck and daring, was killed by the fall of a wall. His portrait,together with that of Patrick McKay, first paid foreman of the Phcenix company, one of the bravest of the original members of the paid fire department, who received fatal injuries at a fire on July n, 1888, is given herewith.

Since it was first established the paid fire department has been enlarged and made thoroughly efficient. In it are still two of the original members—namely,the present fire marshal, W.B.Martin, and Frank Weaver, foreman of hook and ladder company, of which William Morrow and Benjamin Ovington are likewise members. Those composing the Phcenix company are as follows: Foreman, John Kell; engineer, Ezra Fell; hoseman, Robert Caldwell; driven, W. Albert Shouse. The membership of the Reliance company is : Foreman, Robert Davidson; e gineer, Charles Quimby; hosemen, Benjamin Ovington and Thomas Sterling; driver, Charles Beatty. Their portraits,with that of Michael McGraw,are given in this issue, as is also a full page picture of the Reliance and Phoenix engine houses, the interior of the latter engine house, with the city’s apparatus, the hook and ladder truck, and their canine mascots

The Gamewell electric fire alarm system has been installed, with twenty-four boxes, and the fire apparatus consists of two steam engines,four hose carriages.hose wagon,hook and ladder truck, and four chemical entinguishers. There are also 4,000 feet of good cotton hose and 150 feet of good rubber, with Siamese couplers, etc. The eight horses are valued at $1,200, and the total value of the department’s equipment is $18,000; of its three buildings, $12,622. Its expenses durng the past year amounted to about $24,000. The water pressure is so good that, except in the low pressure districts, the steam fire engines are not needed.

It may be added that the greater portion of the city is within the limits of the high pressure water system described in former issues of FIRE AND WATER. Since the high pressure water system has been introduced,the fire loss in Steubendlle has probably been less than in any other city in the State >f Ohio. During 1896 there were forty alarms of fire, with a oss of only $1,754 and insurance of $1,694—making the unnsured loss only $60; and that showing was $4,412 less than n any previous year since the establishment of the paid fire iepartment.

A firemen’s pension fund was created in February, 1888, to vhich is contributed one-half of the tax levied on all foreign fire insurance companies doing business in the :ity. For permanent disability a fireman receives $40 a month Should he lose his life, his widow receives $20 a month and each child under sixteen years of age, $6. For partial disability a member of the department receives not less than $20, nor more than $30 a month. After serving for twenty-five years he may retire and receive $30 a month, or, if he serves for thirty years, he may retire and receive the same sum, exempt, however, from execution or attachment. 1 ne firemen’s pension fund now amounts to nearly $4,000. 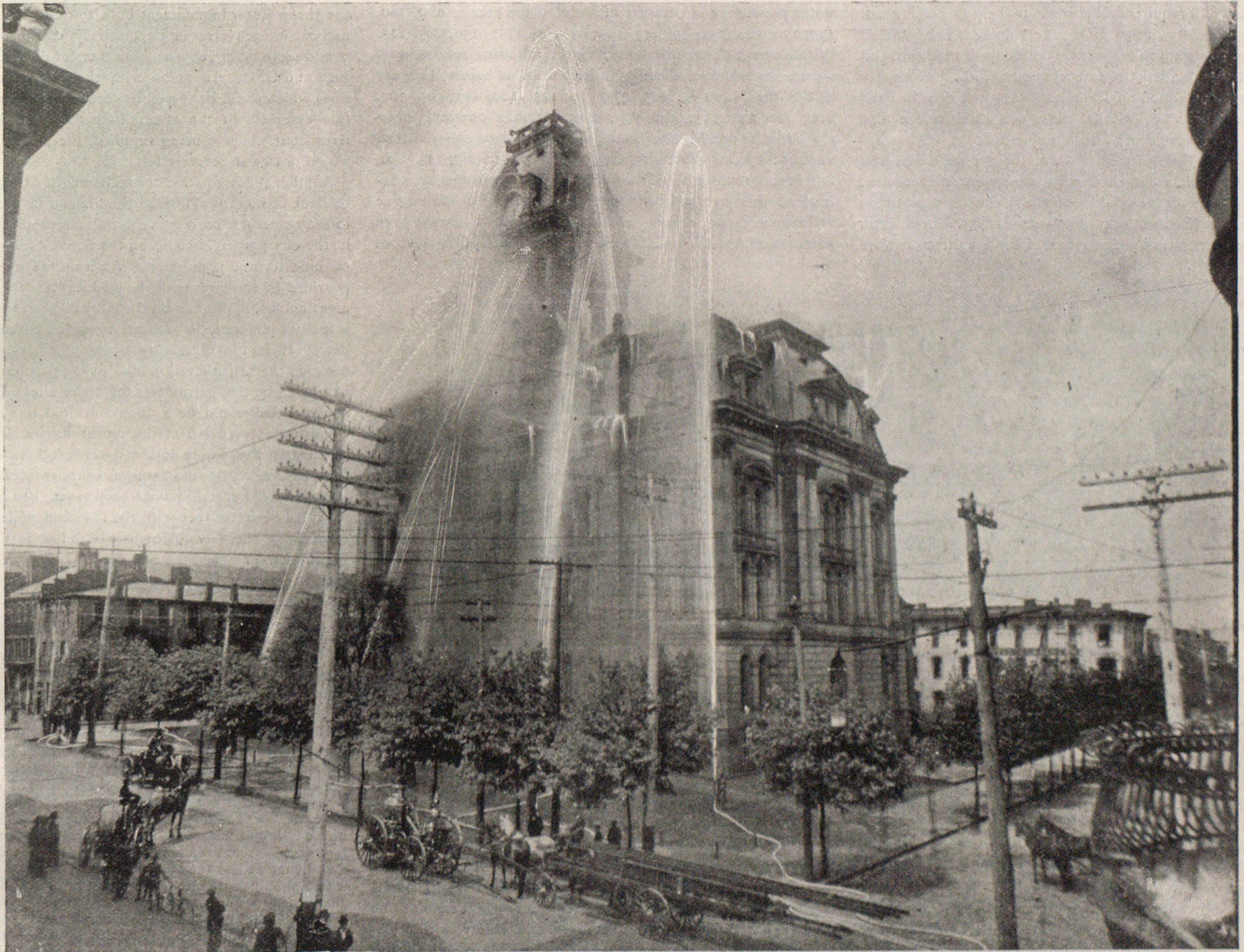 Like all American cities, Steubenville, Ohio, started out with a very rudimentary fire department—consisting simply of a bucket brigade. This primitive method of fighting fires continued up to the year 1822, when the citizens auth orized the select council to purchase a small hand fire engine in Philadelphia. This was housed in a one-story frame building on the west side of Third street. In course of time a second hand engine Was purchased and placed in another frame building on the east side of North Fourth street—the site of the present Floto block—between Market aad Washington streets. In 1333 C. C. Wolcot bought a rotary fire engine on wheels for the use of his factory—allowing it, however, to be employed at any fire in the city. In 1846 the authorities purchased two larger hand engines—the Reliance and Phoenix—which were manned by the volunteers who formed the city’s fire department. Of these there were organized two icgular fire companies, which later on were supplemented by a numberof independent companies, among which the Vigilants were the most prominent. These were governed by the same ordinance* of council as the regular companies.

As the existing water system was hardly less rudimentary than that of the fire department, the council enacted that for the proper feeding of these engines during a fire all propertyowners should keep from one to six leather buckets hanging on the walls or ceilings of these buildings, so as to be easily procurable in case of emergency. The capacity of each bucket was to be three gallons, and each one was to be distinctly marked with the name of the owner and the number of the lot on which the building stood. With these a bucket brigade of men, women, and children was formed to the river or nearest cistern—the men passing the full buckets and the women and children the empty. On January 27, 1852, council passed an ordinance for the governance of the volunteer firemen and the citizens in general at fires. It exempted firemen from labor on the highways and required all citizens to help in putting out fires under a penalty of $50. One fire warden was appointed annually in each ward to inspect the buildings in that ward and see that all the regulations were complied with. Three fire directors were also appointed to attend fires and help in their extinguishment The senior of these was chief for the time being and was invested with absolute authority. Other appointments were four linemen to form the people in line and keep them at work, eight hook men, and eight ladder men. It was obligatory on the officers of the volunteer department to wear their uniforms at fires or pay a fine of $5. The director in charge carried a trumpet,and each of the fire directors wore a white scarf on his hat, with an inscription designating his office. The linemen also wore white scarfs, as did likewise the hook and ladder men; the linemen in addition wearing badges and carrying staffs painted black,with the exception of one foot at the end painted white. Every volunteer was likewise required to turn out in the annual parade held for a number of years on the last Saturday of May, but afterwards on the Fourth of July. On such occasions some of the companies turned oui. from eighty to one hundred strong. The chief marshal was the first director and any firemen who disobeyed orders while on parade was lined and lost all his exemptions and other privileges as a firemen.

In the spring of 1870 the city purchased its first steam fire engine from L. Hutton & Son, of Waterford, N. V. A hose reel and 1,000 feet of hose were also purchased from the same firm—the total cost being $5,270. This engine was placed in the Phcenix engine house. Its first engineer was Homer I’ernar, who* was elected and appointed at a salary of $200 a year. In the following year the same firm supplied another engine at the same price. This was placed in the Reliance house, with Samuel Martin as first engineer and James Bean as second (both elected). The volunteer fire establishment was still kept up—indeed.it was nearly fifteen years before the paid .department was organized.

The illustrations accompanying this notice show (1) thecoutt house at Steubenville,with the height of six high pressure fire streams direct from the plugs (no apparatus being required)— a marked contrast to the old days of wooden buildings,wooden water pipes,and bucket fire brigades;(a) the ruins of the South Fourth street fire on August 14, 1893, at which the loss was $85,000.

Chief Archibald,of Cincinnati, Ohio, estimates the expenses of the fire department of that city at $563,764 for the ensuing year.