It appears that a firefighter is horizontally ventilating a fire that has reached or is seated in the top floor (occupied attic space) of this structure. But is that all there is?

I have discussed the “rear” of the fire in Random Thoughts. While this stretches the concept as presented —it is right on as far as firefighting size-up is concerned.

The attic is occupied. How do you know? Well in most cases, the giveaway is multiple bells on the door, more than one mailbox, and a fire escape to the third floor attic. Other clues include screens in the attic windows; windows open or storm-windows shut; curtains, blinds, and drapes on the windows; and an air-conditioner.

These firefighters should be thinking V.E.S., or, in order of priority: Ventthe attic space for entry into it to search the space at the rear of the fire before the nozzle gets there.

If this space is occupied, these firefighters at the “rear” of the fire are the only chance anyone inside has to be removed or rescued before the fire within the occupancy is driven to them by the advancing hoseline. If this space is unoccupied, this ventilation procedure gives the nozzle team advancing up the attic staircase a greater chance of success.

These fire photos, when viewed together, show an awful lot about the value of tower ladders. The fire is a defensive operation. All handlines are withdrawn and the fire is fought from the sidewalk and street. Pressures on handlines are increased for volume and penetration. But there is never really enough. In the first photo there are five firefighters on each handline. The staffing levels are excellent, but for an outside stream a handline does not supply enough water, nor does it have the sufficient force to knock down the partitions and ceilings that would have been done by “truckies” if the firefight remained manageable and we remained inside.

The tower ladder shows its worth at aggressive defensive operations like the one in these photos. Collapse is not a possibility yet. We need the hitting power of highvelocity master streams, delivered with the aggressiveness of a handline —the tower ladder.

Aggressive defensive (outside) operations mean starting with the lowest floor on fire and hop-skipping up and back down until the highest floor on fire is quenched. It is virtually impossible to do this with a traditional aerial ladder stream.

In these photos one tower ladder stream can do the work —and more —of the two handlines, and with less danger of injuries. These firefighters are exhausted. Drop the tower ladder to the sidewalk, start water, and let those just evacuated “take a break.” 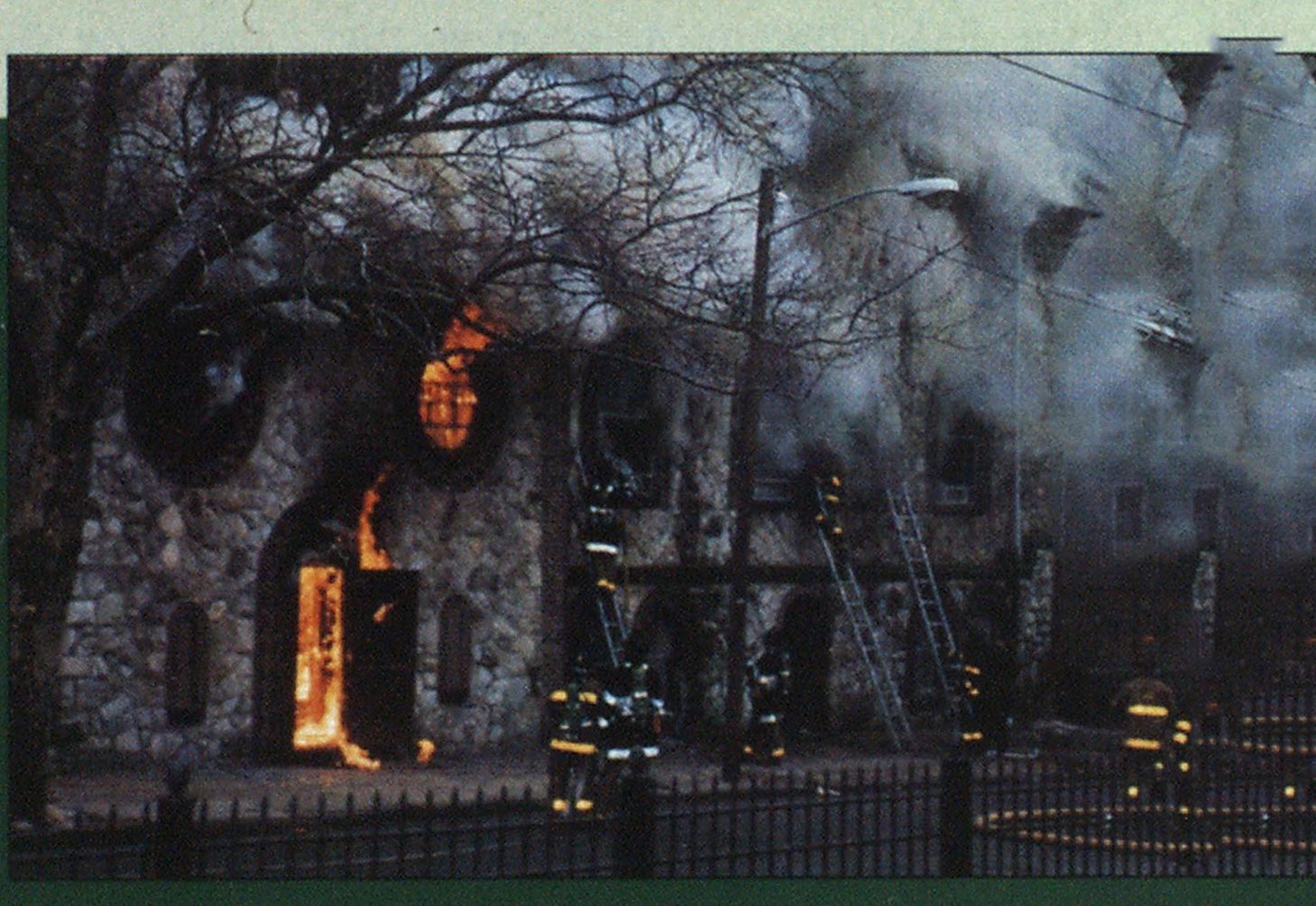 This turn-of-the-century religious structure is typical of those in older communities. With fire this advanced on arrival, you should plan for collapse of the roof structure. The fire load here is in the roof area —the truss loft.

At heavily involved peak-roof religious structures, there exists a critical factor (that which must be assessed or overcome if you are to support an aggressive, interior attack; if it is impossible to attain, you must switch strategy to defensive and plan to lose the structure): to create a large, expanding vertical ventilation opening at the ridge pole to halt the horizontal spread of fire throughout the truss assemblies.

If you are forced to a defensive posture, the next attack point should be high in the enclosure wall —the one connecting the two parallel bearing walls —usually the front of the church. You will want to get powerful, maneuverable streams into the openings that will give you access to most of the truss assemblies. This opening is the round rose window (if present) or any other opening you can access (ventilators, or decorative window assemblies).

America usually does not save its religious structures if the fire gains a foothold in the truss assemblies—for the reasons described above and others.

The older, manor-type structures, usually declared historic landmarks, have many fire problems that usually are not found in the routine dwelling fire. These types of structures, because of usage changes and age, have so many individual variances that should concern the structural attack crew that there should be a preplan survey of each one. Unfortunately, many still are private dwellings and are exempt from inspection. But if they have been converted to multiple dwellings or places of public assembly or have other public/commercial status, it’s worth crawling around inside and taking notes.

Some of the problems include the following:

Fires in strip stores are difficult because of substandard construction and rapid fire spread through common cocklofts and cellar spaces. The difficulties multiply when another “taxpayer” is built above the first. Common hallways, attic or cockloft spaces, confusing layout and access, secondary means of egress, and more make this an interesting firefight at best.

Becoming more common, however, is the “wrapped” building problem. Wrapping is a term used to identify building facades that were designed with horizontal openings (windows) that for one reason or another no longer are useful to the building and its owner/occupant. The openings are sealed with masonry, large signs, other false work, or—in this case —vent louvers and false siding.

If you know your district well or understand that something is wrong at fires that appear to have no horizontal openings, usually on upper floors, use your imagination, dexterity, and tools. If you are unable to deal with internal smoke conditions, such as that generated by the fire pictured, you must abandon the offensive attack. Flashover and smoke explosions become real possibilities—to say nothing of the ongoing weakening of the structure by a fire you cannot get at due to lack of ventilation.

Plan to operate extensively on the outside of these structures. Prepare for position of logistics necessary to attain the goals of firefighting now made more complicated by the change in the structure’s facade.