Where alternating current is available, the question of arranging apparatus for thawing is somewhat simplified, though a factor of danger is introduced through stepping down high voltage current. Distribution lines in alternating current systems may carry a voltage of from 2,200 to 6,600, and it is necessary to bring this down to 110 or 55 volts, depending on the size of transformers employed. With the higher voltage a longer line of pipe can be thawed at one time, but where the apparatus is to be used chiefly for hydrants, the 55 volts is entirely sufficient.

Apparatus for alternating current thawing may he mounted either on a motor truck or trailer, the latter being possibly due to the comparatively light weight of A. C. equipment as compared with D. C. The apparatus necessary to the thawing out includes: transformers, water rheostat, ammeter, watt hour meter, should the current be paid for at meter rates; 500 feet of 400,000 C. M. extra flexible, insulated copper cable, in 100-foot lengths. Cable for connecting the transformers to high voltage distributing lines would, of course, be furnished by the power company.

A typical layout of equipment of A. C. apparatus is shown in Fig. 9. In this case the line voltage is 2,200 and the transformer ratio is 20 to 1, giving 110 volts on the secondary side of the transformer. The total transformer capacity for thawing hydrants and mains should be from 30 to 55 kilowatts, the lower figure being for hydrants and short stretches of pipe while the larger, for long stretches. In some cases single transformers will do while in others two connected together may be necessary.

Fig. 10 gives connections for both 30 and 55 kilowatt transformers on 2,200 and 6,600 volt lines, indicating amperage in both primary (high tension in all cases shown) and secondary, the low voltage side.

Five hundred amperes will thaw a 10-inch main as well as a 6-inch line, but the time required for the larger pipe will be much greater. For instance, the New York Edison Company used 416.6 amperes for thirteen minutes to thaw out 52.3 feet of 2-inch pipe, while in the proceedings of the American Water Works Association figures show that 400 amperes were required for two hours to thaw out 800 feet of 10-inch pipe. The local conditions also govern the time required for thawing, such as moisture in earth, whether or not pipe line passes through salt water bodies, etc.

The following data is given to show the drop in voltage along pipe lines of different diameter, where joints are well made and electrical contact is good.

Actually, conductivity of pipe joints varies widely, making necessary the use of rheostats to regulate the current to a safe amount, both for the generating or transforming apparatus, and the pipe joints themselves. While transformers may be overloaded 50 per cent for fifteen minutes or so in cold weather, or 25 per cent, for an hour, still the danger is present of burning them out if they are called upon for an excessive amperage. 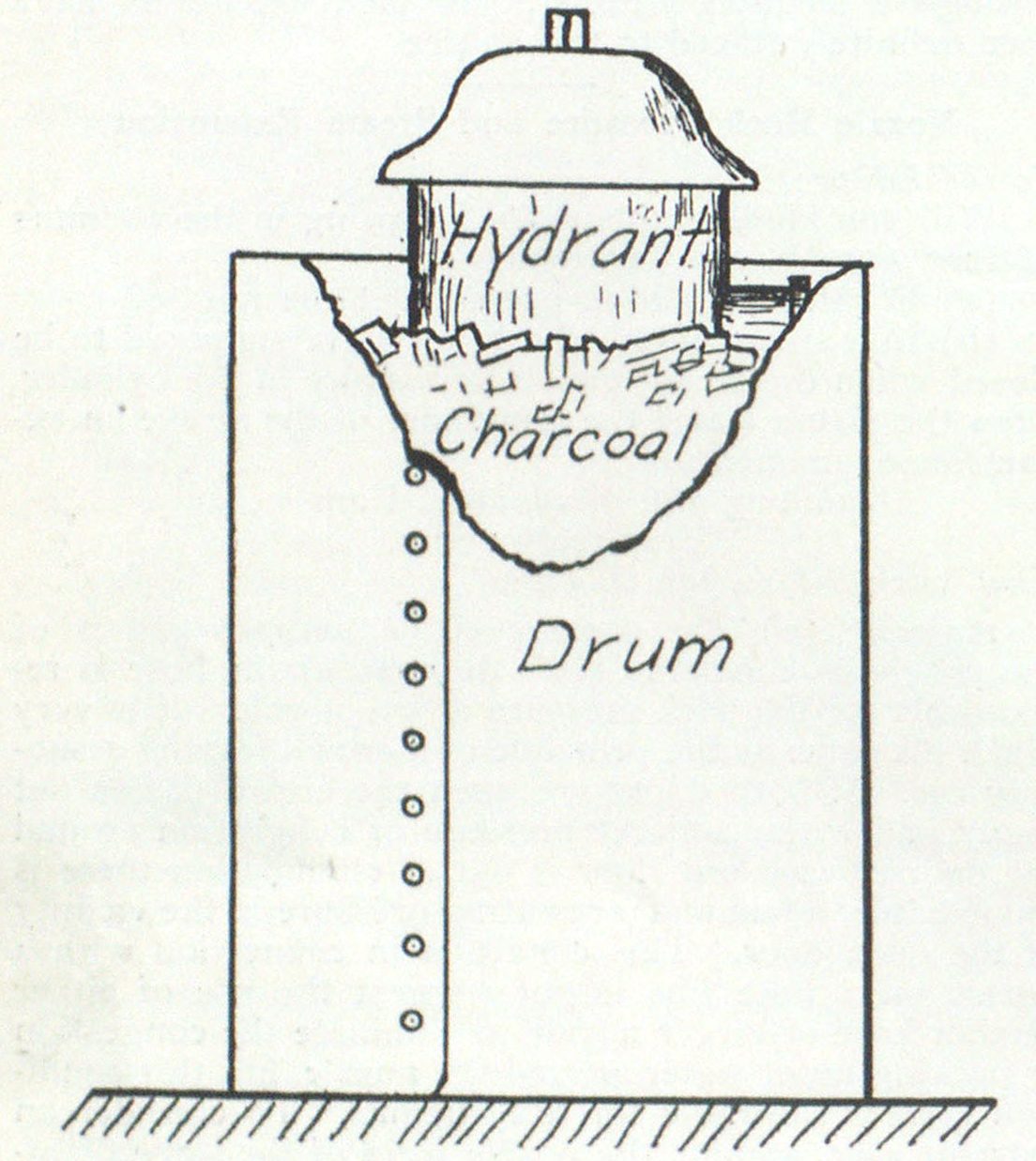 The building of fires around hydrants in order to thaw them out is not uncommon practice in small cities and towns. There are a variety of ways in which fires are built. One city has had built drums which are placed around a hydrant and a charcoal fire is then set therein, as shown by Fig. 4. Wood fires are quite common, boxwood being very frequently made use of. Jute and oil soaked oakum are sometimes bound around a frozen hydrant and then fired, while kerosene and gasoline torches are often brought into play to accomplish the thawing.

Reaction between calcium carbide and water, and the subsequent slacking of the calcium oxide produced, give rise to considerable heat. This heat from one pound of chemically pure calcium carbide amounts to sufficient to raise the temperature of 4.1 pounds of water from the freezing to the boiling point.

This property is made use of to a gradually increasing extent in thawing of frozen hydrants. It is only necessary to pour a quantity of finely broken carbide into the barrel of the hydrant and it reacts upon the ice therein, melting it. The reaction is accompanied by the generation of acetylene gas, which, however, is not made use of. One cubic foot of acetylene gas requires 11.91 cubic feet of air for its complete combustion, and it is not impossible that a form of blower may be devised for forcing air into the hydrant barrel while the gas is being generated in order to provide sufficient air for combustion of the gas inside of the barrel, which would greatly increase its efficiency in thawing. Carbide and acetylene gas have no deleterious effect on cast iron.

Electricity has been gradually growing in favor as an agent for thawing fire hydrants and water pipes.

Where direct current only is at hand, current is not always available for thawing hydrants and mains, as it requires around 500 amperes for this purpose, and circuits in residential sections seldom carry this amount.

Gasoline-engine-generator sets have proven very satisfactory for this service. They may either consist of gasoline engine and generator mounted on a motor truck or a generator alone mounted on truck and driven by the truck motor. The voltage desired from the generator should be not less than 50, while a voltage greater than 100 would seldom be required. If 500 amperes at 100 volts are wanted, the gas engine must have a brake horsepower of around 80, while if 50 volts and 500 amperes are desired, 50 brake horsepower in the gasoline engine would be all that is required. In addition to the engine-generator set, ammeter, rheostat and cable should be included in the equipment. Fig. 5 gives the layout of a typical outfit. In a thawing outfit put in service at Columbus, Ohio, a gasoline engine of 50 horsepower was mounted on a truck and direct connected to a generator, and operated at 800 revolutions per minute. A special governor was designed which permitted of governed control at all speeds between 250 and 850 revolutions per minute. Gasoline used for fuel was supplied under three pounds pressure from a 26-gallon tank. There was provided sufficient radiator area to permit continuous operation of the engine at full load. Cooling water was circulated by a pump as is usual in engines of this size.

The engine drove a generator of 30 kilowatts capacity, direct current, 100 volts maximum, and giving 300 amperes or 400 amperes at 75 volts, the speed being 800 revolutions per minute maximum. It was decided that an output of 30 kilowatts would, in most instances, produce results in a time interval sufficiently short to render a heavier financial investment unwarranted.

The melting capacity of the plant is 12 pounds of ice at 32 degrees Fahrenheit per minute. This melting effect is, of course, concentrated on the inside wall of the pipe, producing a skin of water surrounding a core of ice, which is quickly melted by the flow of the water itself. Actually the initial melting is all that is required of the current, for as soon as a few drops of water show at the delivery point the current may at once be shut off and the water will complete the work.

Figs. 6 and 7 show types of water rheostats which may be used with either A. C. or D. C. 1 he object of the rheostat is to check the amount of current flowing through a main to the proper amount. There is always a possibility that poorly made lead joints may be melted out if excessive current is sent through the pipe line, hence the rheostat. The rheostat, adding resistance to the circuit, cuts down the voltage drop across the balance of the circuit, producing the reduction in current flow.

The tank must be made of some non-conducting material such as wood or fibre, so that the only path for current between the electrodes will be through the electrolyte, the salt water in the tank. Metal hoops around the outside of the barrel or tank are permissible.

In the case of the D. C. engine-generator set, the rheostat tank may be mounted on the truck along with the other apparatus, and with the transformers where A. C. is employed.

In addition to the rheostat and ammeter the thawing outfit should include at least 500 feet of 400,000 C. M. extra flexible, insulated copper cable in 100-foot lengths. The arrangement of apparatus for thawing either hydrant branch or main is illustrated in Fig. 8.