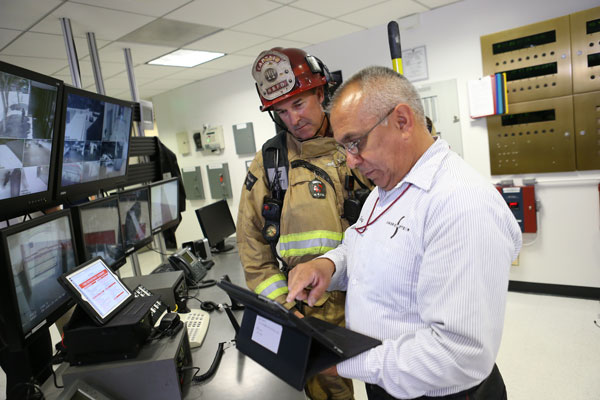 Many years ago, when I was just getting on the job, there was no such thing as a rapid intervention team or even a safety officer. Heck, “rehab” (unless it was at a multiple-alarm fire, a real dragger) was when we put the fire out, repacked the hose, went back to quarters, and cleaned and checked gear, equipment, and tools. THEN we could take a break–during paperwork, of course. Now it is a whole new ball game.

Things change with time. The fire scene has to improve, and that means improved safety, equipment, efficiency, command, and intel gathering. If nothing else, the sheer economics of it all demands that this takes place. Firefighters must simply do more with less. You have to be smarter on the fireground. Technology drives innovation, and innovation drives change–it is the engine that drives the machine.

When I began my new occupation, firefighting, no one could have told me that we would have computers in the fire station one day (they came in 1985 to all 14 houses), then that laptops would be in every command vehicle, or that tablet devices would augment (and eventually replace) the laptops. Nowadays we have Google Earth, which provides a top-down view of geographical sectors where an incident is unfolding, and with the invention of tablets, an explosion of mobile applications to compliment this technological wonder. Now we have scene mapping and management tools, including unit tracking, personnel accountability report (PAR) stamping, scene timers, and more. The newest seemingly mind-bending tool? Drones. Who would have thought 10 years ago that you would be able to launch a drone to provide aerial reconnaissance on large structure or brush fires, even conflagrations. Now the incident commander (IC) can gather invaluable information on fire growth, exposure concerns, active fire crew threats, and more. The IC can gather equally valuable intel on interior operations in high-rise and other structures via closed-circuit TV cameras that are now seemingly everywhere. Why send a crew up to the 47th floor to investigate a fire alarm’s origin when you can first sneak a peek at the floor’s conditions through the eyes of a security camera in the elevator lobby or elsewhere–right from the safety of a security console in the lobby? Time is saved, and threats are reduced. 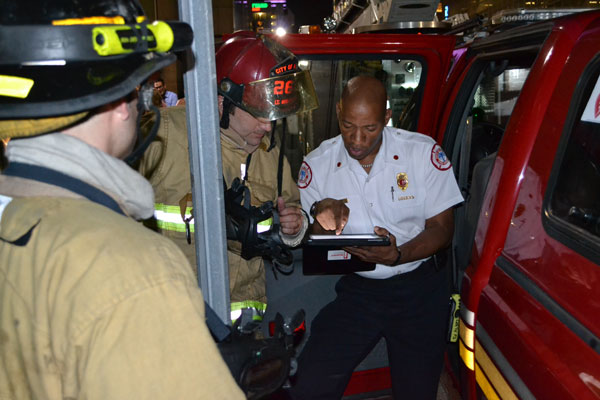 MANAGING ALL THAT DATA

Now the IC can also extract critical schematics of the target building while positioning the command post in an area remote from their buggy using a mobile tablet. Key check lists, standard operating procedures (SOPs), and much, much more are now at the fingertips of the end user. Technology has proven itself to be boundless in its ability to deliver increased efficiency to the command post. However, with this rapid rise and deep access to detailed scene intelligence comes the obvious accompanying perplexing dilemma of how to manage it. After all, in most cities/towns, the IC must still perform the basics: visual size-up, interaction with first-arriving units, managing incoming apparatus, establishing the command post (CP), designating a staging area, communicating with dispatch, initiating a command system, scanning available preplans, designating divisions and groups, formulating scene strategy and supportive tactics, monitoring radio traffic, beginning unit tracking and taking PARs, monitoring fire behavior/growth, and requesting additional resource needs. Even with cities that have the luxury of a driver/aide to assist with the above tasks, it can still become the impossible dream effectively managing just these tasks alone on serious events, much less a flood of additional scene and other resource intel funneling itself into the command post at a heady pace via new technology tools. Still, this highly beneficial information clearly cannot be ignored simply because there is no current means to manage it.

RELATED TRAINING: MAKING A COMEBACK: THE CHIEF’S AIDE | THE CASE FOR AN AIDE AT MULTIPLE-ALARM INCIDENTS

For years I have been sharing the possibility of adding a new component to the command post equation: an intel officer. This is not the planning officer, which has been part of the command chart for decades, nor the logistics officer. In fact, it doesn’t even need to be a fire officer or firefighter. It can simply be someone who is well-versed in managing the medium of advanced technology, regardless of its source: someone who is tech savvy and knows their way around an iPad and modern software, and who can manage streaming data and can filter it down to bite-sized chunks for the IC to absorb and react to.

The days of managing an incident scene by way of legal pads/pens/pencils nd dry erase boards/markers are quickly nearing their end. Soon, the entire scene will be run using digital mobile technology and scene intel will be screaming into the CP fast and furious. The data cannot be ignored, as much of it lends great value to enhancing the overall scope of operations. Again, everything is safety and efficiency. An intel officer (or aide of sorts) can provide help with the following useful tasks:

The list is nearly endless and it only grows by the year. Soon, the IC and/or operations officer can just lean over and say “What units are up on Fl 20 staging? Show me the 22nd (fire) floor layout, standpipe riser and base ventilation system purge capabilities…..how many units are still responding? When was fire attack/Engine 5’s last PAR?” The intel officer can quickly bring up vital intel on one or more tablet devices within seconds to share with the commanding officer. This is the future, and the future is nearly here.

Another concept that could have many of you roaring in the galley over a rare hot meal between runs: remember the movie “Minority Report” with Tom Cruise? Do you recall when he took over an incident and he set up a CP consisting of a hologram screen where he could quickly drag down key diagrams and then sweep them away with just a flick of a gloved wrist, then move on to other data, rapidly and smoothly? That technology is not that far off and could very well be an integral part of an interior-based CPs operations within 15-20 years.

It doesn’t take a highly tech savvy fire chief to manage this, just someone who has the ability to access and display it for the IC….an intel officer.

Curtis Massey began Massey Disaster Planning, a leading fire/life safety firm that creates emergency preparedness pre-plans and mobile technology solutions for the commercial real estate sector across North America, in 1986. A world-renowned fire service instructor, he trains many of the largest North American fire departments in advanced high-rise operations. He is a 20-year veteran of the fire service and frequent lecturer at international fire conferences and commercial real estate meetings, including BOMA.