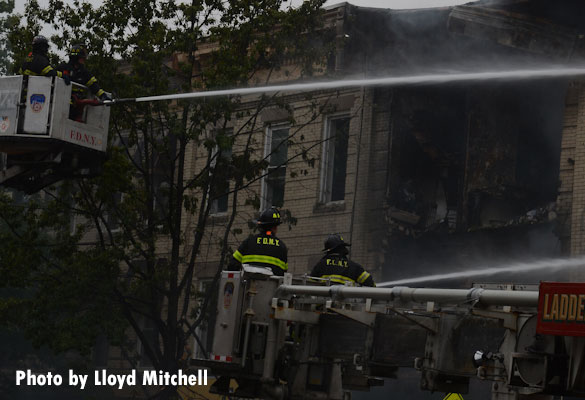 Fire photographer Lloyd Mitchell has covered New York State’s two largest cities, and often shares his work photographing Fire Department of New York (FDNY) units with Fire Engineering. We talked to him a little about his beat and work.

FE: What got you started in fire photography?

LM: I wanted to learn more about the firefighting culture while on summer vacation from college during the summer of 2009.

FE: What kind of equipment do you use?

FE: What have been some of your more memorable jobs?

My memorable jobs have been in either Brooklyn or Buffalo, New York. Two memorable jobs in Buffalo were 167 Box Street and 174 Timon Street. The Box Street fire was a car fire between an occupied and vacant house. The fire extended into both dwellings. The job came in right before my 8 a.m. class. I took the job in. The Captain of Engine 33, Jeff Stauffiger, made a rescue of an elderly resident in the occupied house. The job at 174 Timon Street was interesting. I will never forget watching Firefighter Scott and Firefighter Czora rescue a mom and her son under heavy fire conditions. The jobs in Brooklyn that have stood out to me were the two seven-alarm five days apart from each other. The first was the Blue Ridge Farms fire in Cypress Hills, Brooklyn, on July 23, 2012. I was at a warehouse fire in Canarsie when that one came in. I took the L train to the J train, and got off at Cresent Street. The column of smoke and fire load was amazing as it consumed the interconnected warehouses. The other job that stood out to me was 665 New York Avenue. That was a seven-alarm fire in a multiple dwelling on July 24, 2012. The fire took control of the six-story building and roof. Fire buff and firefighter Danny Alfonso called me for that job. He said it was a second alarm on arrival. I had just came from taking the three train into work. I was early by an hour. I took the job in, I got there just in time right before they exited the fire building to go defensive. Last but not least was a house fire on East 108 Street. The house was a hoarding house. I got there before the first-due engine. One of my favorite photos came from that job, which was a member of Tower Ladder 170 conducting a primary search in the basement.

FE: What’s unique about the area you cover–the place(s), the firefighters, the hazards, etc.?

LM: Unique to the area I cover is building construction. We have a lot of attached brick buildings called Canarsie Tenements, taxpayers, commercial buildings, high-rise public housing buildings, and shorter public housing buildings. We have vacant buildings in the area. One of the hazards I noticed in the area are chop shops (cars stacked up on top of each other with different parts removed from the vehicles.) The fire companies in my area are very aggressive when it comes to aggressive interior firefighting.

FE. What have been some of your more memorable publications?

LM: My most memorable publications have been my cover photos and images that appear in the magazine as well. It is always interesting to know a specific situation or scene that you captured because it can help make someone a better firefighter or fire officer.

LM: My advice to aspiring fire photographers is when on scene take a second to look around the scene, be mindful of the activity on scene. The fireground is an active place where anything can happen and you don’t want to become a part of the story. Remember, you are there to document the scene, not make the news as a victim stat. Show your best images to the editors, this way your images are not taking up space on your computer for just your eyes to see. The fire service will always need photographers. Look at photographers from the past and present. Fire photographers like Bill Noonan, Harry Dole, and Matthew Daly were legends at the craft of fire photography. Guys who are out there currently shooting are Dave Hernandez, Trevor James, Kelly Ross, and John Cetrino; all have great work and put a lot of time into their craft as fire photographers. Prepare to be either in the right or wrong spot for when a good job comes in. Prepare to lose sleep and realize you can’t make every fire in your district.

SOME FEATURES OF THE SPRINGFIELD FIRE SERVICE