ELSEWHERE in this impression will be found an account of some fire tests with floors made in London by the British Fire-Prevention committee, an organization whose objects are:

To direct attention to the urgent need for increased protection of life and property from fire by the adoption of preventive measures.

To use its influence iu every direction towards minimizing the possibilities and dangers of fire.

To bring together those scientifically interested in the subject of fire-prevention.

To arrange periodical meetings for the discussion of practical questions bearing on the same.

To establish a readingroom, library, and collections for purposes of research, and for supplying recent and authentic information on the subject of fire prevention.

To publish from time to time papers specially prepared for the committee, together with records, extracts, and translations.

To undertake such independent investigations and tests of materials, methods, and appliances as may be considered advisable.

The reports of this committee on tests with materials, methods of construction, or appliances are ‘intended solely to state bare facts and occurrences, with tables, diagrams, or illustrations, and they are on no account to be read as expressions of opinion, criticisms, or comparisons.” The report of the fire tests with floors shows the results of an investigation which had the novel and interesting feature of having been conducted in such a manner as to comprise. (1) an ordinary test, and (2) a continuation test. The value of the continuation test to insurance men is very great, since it shows what the nature of a material or system of construction may be, after it has been subjected to one severe trial, and whatever necessary ordinary and decorative repairs have been made as were needed to restore a building to the same condition as before the outbreak of the fire. If such a trial proves nothing else, it, at least, demonstrates such confidence in the article tested on the part of the maker or inventor as warrants him to permit his goods to be again so fiercely tested. The method as pursued by the committee was the most exhaustive of any that had preceded it, and was one which calls for the special attention of all who are interested in the question of fire-resistent and nonfire-resistent materials. 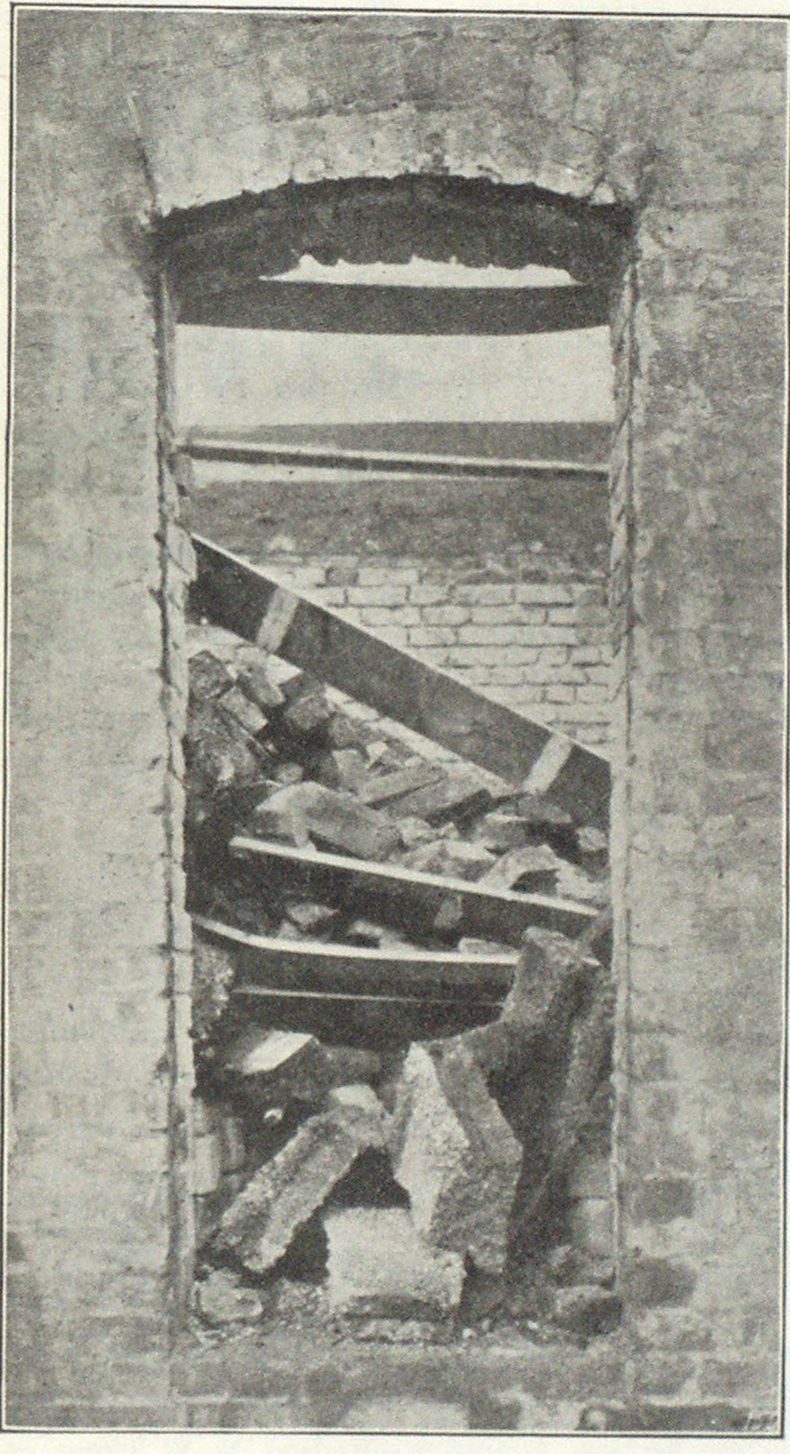 AN experimental fire test with a floor of deal joists, with coke breeze concrete, has recently been made in England—the investigation having been undertaken with a view of demonstrating the resistance offered by a floor, which, while it might in every way conform to the terms of the law regulating its construction, nevertheless lacked those features which are present in those which, rightly or wrongly, are looked upon as fireproof— “fire-resisting” being the more correct term. As already stated the floor in question was of deal joists and coke breeze concrete. The word “joist,” it will be observed, is qualified by the adjective “deal,” since in building parlance and that of the authorities charged with the oversight and administration of the law a joist may be of iron, steel, hard, or soft wood. But, while the law permits the use of any kind of joist available, it does not in every case demand that these joists shall be protected, or prescribe what that protection shall be, so as to avoid the possibility of fire being spread by their means.

The British Fire Prevention committee, which has been devoting attention, time, and money to the subject, recently arranged a test by which should be demonstrated the resistance to fire of a floor conforming in every respect to the clauses of the London building law, and yet not of the so-called fire-resisting type. The object of the test was to record the effect of a fire of one hour and a quarter commencing with a temperature of 500 degrees Fahr., gradually increasing to a temperature not exceeding 2,300 degrees Fahr., followed by the application of a stream of water for three minutes. The area of the floor under investigation was 100 feet superficial in the clear (ten feet by ten feet), and it was to be loaded with 100 pounds per foot distributed. The time allowed for its construction and drying was six weeks, and the work was done in winter.

The testing chamber was constructed of stock bricks with lime mortar. The ceiling of the floor tested was seven feet, nine inches above the pavement of the chamber. The door opening, which was bricked up on the morning of the t_____st, measured two feet, six inches, by six feet, six inches. The fuel used was gas produced at the testing station—the supply being regulated by valves and dampers and admitted through two mixing chambers of fire brick, each ten feet by three feet. The temperature was recorded by two Robert-Austen pyrometers—the first, to take a continuous record from an observation-hole in the wall, and the second, to take five observations from five other points. The load of bricks distributed evenly over the area of the floor to an extent of eighty-one square feet weighed 8,100 pounds—making a load equal to 100 pounds the square foot. The stream of water following the application of heat was applied through a playpipe, with half-inch nozzle, and supplied from a manual fire engine equipped with a pressure gage.

The floor having been constructed in winter, the hut was carefully covered with tarpaulin till the morning of the test, and, owing to the prevalent frosty weather, two coke fires were kept close to the concrete while it was being mixed, and the water was raised to a temperature of sixty-five degrees Fahr. As soon as the concrete was putin, it was covered over with double sacks, and the hut was covered with tarpaulin, and all openings were closed to keep out frost. The construction of the floor was as follows: On December 11, 1899, wood centering was put to support the concrete, and fir joists, seven inches by two inches, were fixed across the hut from north to south on the four and one-half inch offset of the walls, and twelve and one-half inches from centre to centre. Wood fillets, one inch by three-quarters of an inch, were nailed to the sides of the joists to support the concrete, as shown in the accompanying detail of the floor. On the top of the centering and between the joists was filled in to the depth of five inches concrete composed of five parts of dry coke breeze to one of Portland cement. The concrete was turned over four times dry and as many times wet, and was mixed in batches of three-quarters of a yard at a time—the quantity of water used for each batch being 16.25 gallons. The concrete was filled on to the centering in two layers of two and one-half inches each, which were trodden in and beaten with the flat side of a shovel. After having been up twenty-seven days the centering was removed, and small strips of deal, one-quarter inch by one and one-half inch, were nailed to the bottom of each joist, so as to obtain a level surface—that of the concrete being uneven on the under side through the centering having sagged. To the soffit of the floor five-eighths of an inch tongued and grooved matchboarding was fixed, and a floor of seven-eighths of an inch straight joist boards was laid on the top of the joists. Whilst the floor was being built the usual variable English weather prevailed—dampness and rain, with low temperature, ruling.

The test took place on February 7, 1900, beginning at 3:47 p. m.—the weather being cloudy but without rain. The temperature at 3:50 was 350 degrees Fahr.; at 3:55, 1,200, rising to 1,920 at 5 o’clock. Three minutes after the gas was lit steam appeared through the joists of the flooring; one minute afterwards the match-boarding to the ceiling began to burn; and at 4:1 (fourteen minutes after the gas had been lit) the charred remains of the match-boarding began to fall off in flakes. At 4:5 only the charred remains of two widths of match-boarding were left in position, and the soffit of wooden joists was burning freely. From the beginning of the test until 4:12 volumes of vapor appeared above the floor, especially driving out at the edges of the flooring next the brick parapet on the west. At 4:36 the lower edges of the joists were much charred, so that a space appeared between the concrete and the wood joists. At 4:41 flame appeared through the flooring on the east side, against the parapet, coming up the side of the east joist where no fillet was fixed, and setting fire to the ends of the floor boards for about nine inches. At 4:47 the floor had deflected in the centre, and the concrete between the joists in the three centre logs was cracked transversely. At 5:1 the concrete between the first and second joists on the eastern side fell in, and a full burst of flame appeared along the space thus formed. At 5:2 the gas was turned off, and the brickwork in the door opening was pulled down. The soffit of the concrete was found to be incandescent, and flame appeared on the western side by the parapet. From 5:3 to 5:9 water was turned on to the soffit of the floor. At 5:9 the whole of the floor and load collapsed, falling into the interior of the hut, and continued to burn until extinguished by water. It was then observed that the floor boards were only discolored by the smoke, and were not charred except at the east and west ends. At 5:10 the test was concluded. It may be noted that, as there was no fillet on the east and west side of the two end joists, the flame traveled up the side of the joists and set fire to the boarding. These two joists were much more damaged than the rest. The joists were broken in the centre, and the concrete was slightly disintegrated on the under side, and was broken by the fall into lengths of from twelve inches to eighteen inches. The next day photographs were taken in daylight, which are reproduced in this article, and, on the remains of the floor being examined, it was found that the floor boards were uninjured except at the east and west _____nds. The joists were found to be charred and burned for about two to two and one-half inches up—the remaining portion being fairly sound.

The effects of the fire test may be briefly summarized as follows: In fifteen minutes all the boarding to the soffit was consumed; in fifty-four minutes the flame came through the floor between the last joist and wall; in sixty minutes the floor had deflected and the concrete had cracked transversely; in seventyfour minutes the concrete between the two east joists fell; in eighty-two minntes the floor and load collapsed. The joists were found broken in the centre, and the bottom edge charred about two to two and one-half inches up. The fioor boards were but slightly injured.