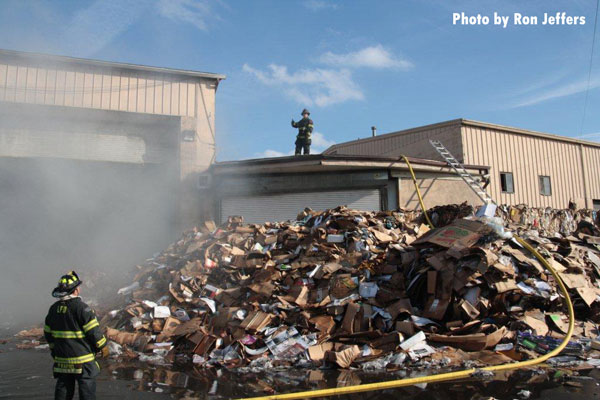 Article and photos by Ron Jeffers

Volunteer firefighters and EMS personnel in southern Bergen County, New Jersey, had their Thanksgiving Day plans altered thanks to a multiple-alarm fire that involved a recycling business in Lyndhurst, November 26, 2015.

The mild November day seemed to be an indication on an enjoyable holiday ahead for family and friends. Turkey and football were on many minds on that Thursday morning.

Around 11:30 a.m. the Lyndhurst Fire Department was dispatched to a reported fire at NY-NJ Recycling on Page Avenue. A large column of black smoke rose above the Meadowlands with fire showing from the large two-story masonry structure. Master streams were set up to knock down the visible fire, but there was still deep-seated flames inside the building in piles of cardboard stored from floor to ceiling.

Second and third alarms were sounded by Chief of Department Paul F. Haggerty for mutual aid companies that set up LDH supply lines and went to work. Lyndhurst Truck 1’s tower was set up on Page Avenue with access to hit the fire from the avenue and west side parking lot. Engine 1 utilized a deck gun on the avenue. East Rutherford Engine 3’s quint utilized a ladder pipe operation in the parking lot. A defensive operation was established with a collapse zone. A large portion of the burning flat roof collapsed during the fire. As conditions of the structure deteriorated, a decision was made by officials to call in heavy equipment to demolish the building even before the fire was brought under control.

As master streams operated, EMS personnel acquired refreshments and sandwiches to pass along to firefighters at the scene.  Bottled water and a sandwich for Thanksgiving, in low-banking smoke! During the blaze, fellow firefighters wished each other a “Happy Thanksgiving.”

Two firefighters were treated for heat exhaustion and a third for a minor leg injury. A crew of two employees working inside the plant escaped the fire unharmed. A Bergen County hazmat team took air samples and found no harm to the public.

The fire was declared under control around 4:30 p.m. The first piece of demolition equipment had arrived and started going to work. A fire department watch line stood by for smoldering flames.