Gabriel Angemi is cooler than you are.

A second-generation firefighter with the Camden, N.J. Fire Department, Angemi didn’t decide to become cool at the firehouse one day. He brought it with him the day he decided to follow in his father’s footsteps and enter the fire service.

Once a skateboarder pursuing this extreme sport professionally and still an artist, Angemi’s canvas is virtually anything he puts his hands on or mind to, be it a photograph, a drawing or his actual fire helmet. It’s not just his tattooed appearance or artistic prowess that defines his mastery of self-expression, it’s how he makes the fire service look like a work of art as well. That’s why Angemi brings a uniqueness of character and mission to the fire service; a passion hard to miss in his appearance and fireground capabilities.

It’s not hard to imagine what will be left of our cities when this economic downturn is over. Images of destroyed buildings, desolate streets and collapsed infrastructure surely come to mind. All of which, in reality, conjure up dowdy images akin to today’s Camden, a rough-and-tumble city which faced the highest crime rate in the nation in 2009 with two-fifths of its residents below the poverty line. In other words, Camden epitomizes socioeconomic apathy and blighted industrialization. And its firefighters champion Camden’s pride and future with faith in why they are there in the first place: to defend the City from an economy and fire duty poised to destroy it. 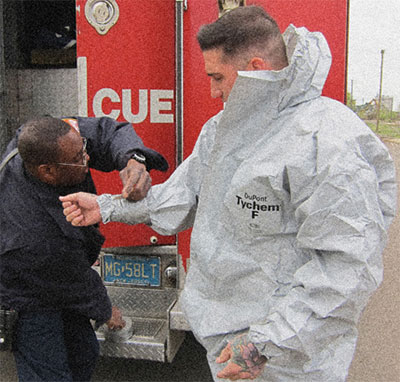 Its firefighters aren’t much different than any others who work in difficult, blighted cities or neighborhoods. They’re gritty, colorful firefighters; proud, over-worked, under-appreciated and often downright crazy to continually endure the punishment they experience. But still they toil on. Evidently, not everyone can fit the mold Camden set out for them. Such humble upbringings can yield interesting characters. And Angemi has broken the mold.

Though his father was a firefighter, Angemi was not as lucky to enter the Camden Fire Department as quickly him. Circumstances and time always get in the way of our dreams and Angemi did not hesitate to move to plan B, professional skateboarding. Angemi took a detour from Camden to San Francisco to pursue his skating and eventual artistic career; an individual pursuit for a creative, inspired mind; Inspired to create more than we tend to see on the surface: the deepness of individualism and self-expression. 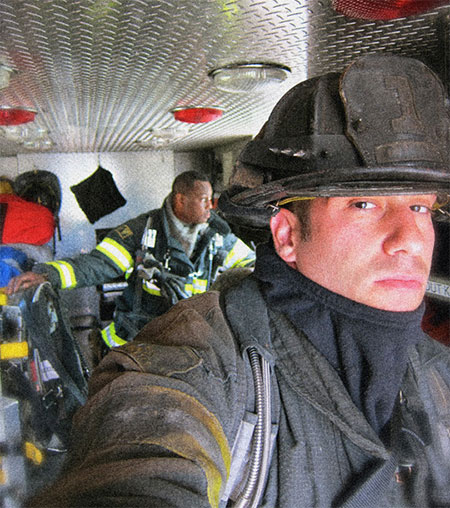 To the contrary it may seem. Skateboarding is an individual sport (emphasis on “individual”) where you only succeed by your own will, with others’ advice to guide you along the way — a mentorship of sorts. Sound familiar to firefighting? Perhaps Angemi made perfect use of his time away from Camden, a detour that actually pointed him back to where he always belonged, and with better direction. Yes, Angemi finally did get the call we all dream of getting: the call to report to the fire academy to begin a career so very few get an opportunity to realize.

Angemi stands on his own two feet in fighting fires the same way he stood on four wheels: standing strong and alone, but with the support and guidance he always knows he has from Camden’s firefighters. So what other tangible significance did Angemi’s skateboarding career bring to the fire service? Skateboarders are a creative type. They’re able to examine an urban landscape and see where they can play, turning a lonely loading dock to a slice of heaven. Urban areas are lovingly, carefully utilized by city dwellers such as skateboarders, bike messengers, musicians, and more. These urbanites take make city life an art. And now, thanks to Angemi, firefighters may now claim their stake in urban creativity.

Turning firefighting to an artistic venture seems obvious and innate for Angemi. While many opt to leave a life of a firefighter at the door on the way out, he turns a day job into a life-long craft. He shoots portraits of the Camden Fire Department’s determined firefighters; he creates works of art inspired by firefighting and its own unique culture. 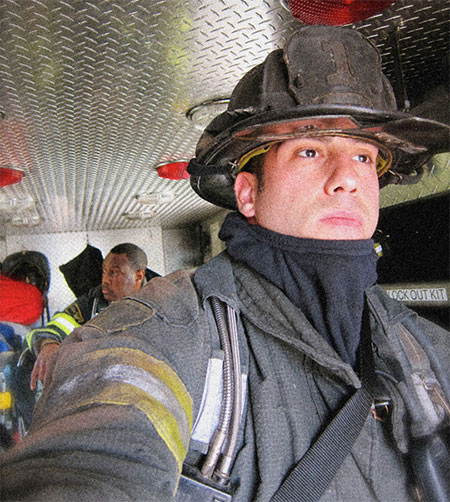 He blogs about all things Camden Fire Department on his Rescue One blog (http://www.cmdfd.blogspot.com/); and even blogs about his outside interests in his other blog (http:// www.ange261.blogspot.com/). Angemi also teaches regularly for Safety and Survival, LLC (www.safetyandsurvivaltraining. com), an organization dedicated to keeping firefighters safe in the line of duty.

Angemi is also an avid collector rare art books and signed first editions, and endlessly strives to fill his impressive library. Around his house, the walls are lined with examples of his and others’ artistic creativity, on canvas and photograph. His inspiration is evident and the urban landscape, culture and its firefighters are his muse.

In an occupation chock-full of commonality and celebrated similarity, it’s refreshing to see true individualism. It is those who stand out not just through their actions, but their self-expression that continue to maintain and re-invent fire service culture.

Even amongst several companies of firefighters dressed in the same bunker gear, Angemi’s pretty easy to spot on the fireground. Simply look for the guy from Camden’s elite Rescue One with spikes in his helmet band and hood pulled over his face like a bandito. Look for the guy covered in tattoos from head to toe taking a blow after a good fire. And look for the guy who stands apart from the crowd, no matter where he is.