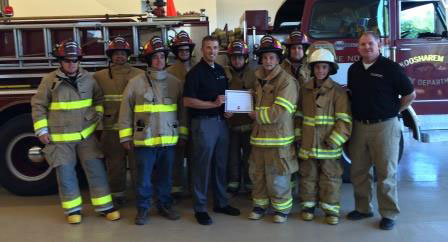 Above: Koosharem (UT) Fire Rescue, one of the 2015 recipients in the Globe Gear Giveaway.

Fifty-two sets of new, state-of-the-art Globe turnout gear were distributed to 13 North American volunteer fire departments in 2015, thanks to Globe and DuPont Protection Technologies, in partnership with the National Volunteer Fire Council (NVFC). The Globe Gear Giveaway program provides struggling volunteer departments with much-needed gear to help improve the safety and protection of their firefighters.

Since launching in 2012, the Globe Gear Giveaway program has provided 299 sets of turnout gear to 56 departments. The 13 latest winners each received four sets of gear, significantly enhancing the safety of their firefighters, who previously made do with old, worn, and non-compliant gear that provided less-than-optimal protection. For departments that weren’t able to provide gear for all of their members, the new gear will enable more of their firefighters to train and respond, enhancing the safety of both the firefighters and the communities they serve.

“We are very grateful for Globe and DuPont’s ongoing support of the NVFC and boots-on-the-ground volunteers through the Globe Gear Giveaway program,” said NVFC Chairman Kevin D. Quinn. “There are many deserving volunteer departments that are struggling to make ends meet and provide adequate protection for their firefighters. We appreciate all of the departments who applied for this year’s program and congratulate the recipients.”

“Every day, thousands of volunteer firefighters place themselves in harm’s way in the performance of their fire and rescue duties,” said Globe Senior VP of Marketing Rob Freese. “We’re pleased and honored to be able to give back to some of the many volunteer fire departments with limited resources by improving the safety of their members with the most advanced turnout gear.”