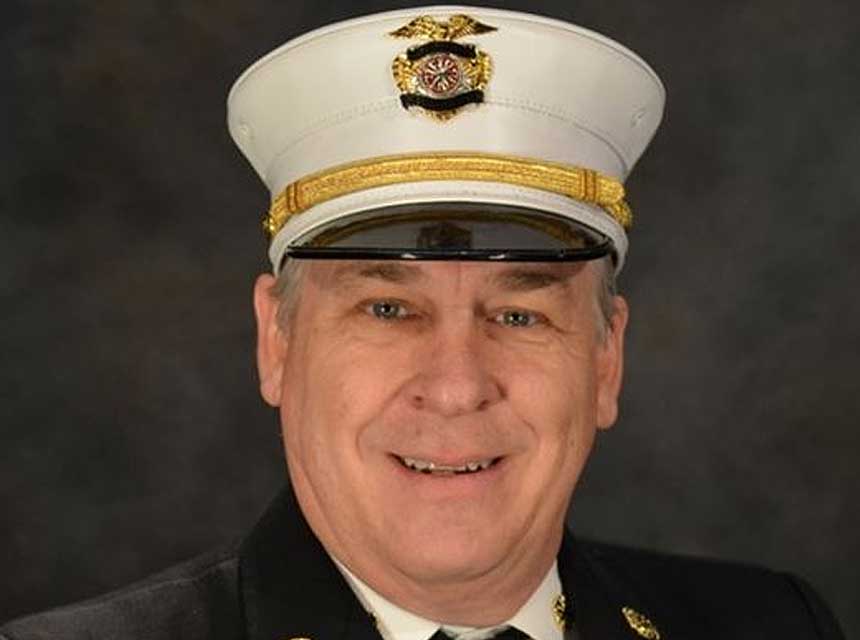 A couple dozen firefighters and family, as well as City Manager Roy Otto, gathered Monday afternoon to say farewell to Lyman at Fire Station 1, 1155 10th Ave. The department hosted a retirement ceremony and broadcast the event on Facebook. Front Range Fire Rescue Chief Mike West played the bagpipes. The public was not invited due to COVID-19 restrictions.

Lyman joined the department March 3, 1986. He applied after seeing an advertisement in the Greeley Tribune. Lyman said in a speech Monday he always had been curious about what happened inside fire stations since he was a child, after he went on a fire engine at a very young age. After graduating from Greeley West High School, Lyman studied at the University of Northern Colorado.

After seeing in the Tribune that the department was hiring, Lyman spoke to his brother-in-law, a firefighter, who helped coach him on everything he needed to know to join the department. Lyman made the eligibility list and “kinda forgot” about it until he got a call back about an opening.

The same day Lyman went to Denver for a physical for the Marine Corps, he returned home, where his dad told him the fire department called. Lyman said he didn’t buy it at first because his dad was “a huge practical joker.” The next day, Lyman called back and began the process to join the department.

When he first began his career, Lyman couldn’t sleep before he went into duty because he was too excited, Lyman said Monday.

He thanked several people during his speech, including the Greeley community, the city council and various family and friends. Lyman said his parents gave him the values that allowed him to succeed, including his mother’s work ethic and his father’s good character values. His father, a disabled veteran, taught him the difference a positive attitude makes, Lyman said.

On May 5, 2016, Lyman became the chief, replacing Duane McDonald. In his time as chief, Lyman oversaw the building of at least two new fire stations, as well as the reconstruction of a station. He was instrumental in the Squad 1 initiative, a partnership targeting frequent 911 users including those with mental health and substance abuse issues, those experiencing homelessness and those with chronic medical conditions.

“I never had aspirations for chief, but I’m really, really glad that I did it,” he said. “I feel like I’ve been able to make a difference, not only in the fire department, but in the community.”

Lyman said he’s most proud of the things he had to fight for, including Squad 1, which he estimated going before city council three times before getting approval.

Monday was Lyman’s last day at the department. He said he hoped to stay longer, but the feeling of needing to retire came over him.

“I felt my passion subsiding, and I didn’t want to be a person in a leadership role without a deep passion for the job,” he said. “I felt like it was time for me to retire and let somebody else step into the role, (somebody) that had that fire.”

In his speech, Lyman acknowledged the tragedies firefighters witness and the toll it takes. Though he was physically fit, the stress had a real impact on him, he said. He told others to take the stress and trauma seriously and to take advantage of counseling that’s available to the department.

“Take care of yourselves and each other,” Lyman said.

As he enters retirement, Lyman doesn’t have any big plans. Playing a little more golf, getting some projects done around the house and just relaxing were top of mind after Monday’s ceremony.

The department is working to replace Lyman, following a national search. Lyman said he sees a bright future for the department.

“There are so many talented people here, and I feel like this department is going to be successful in the future because of all the great, talented people that are coming up through the ranks right now,” Lyman said after the ceremony. “I feel really good about the future.”