The following are among the important recent fires occurring in various sections of the country which have been specially reported to FIRE AND WATER ENGINEERING:

Three alarms were sounded recently from box 1431, at the corner of Summer and Lincoln streets, for a fire in the Wales building in Boston. This box is historically of interest as being at the original location of old box 52, from which the alarm for the great fire of 1872 was turned in. The first alarm for the Wales Building fire was pulled at 8:47 p. m., the second at 8:51, and the third at 8:50. The apparatus responding consisted of 12 engines (11 first and extra first sized steam engines and one Seagrave motor pumper), 5 ladder trucks, 2 chemicals, 3 water towers, rescue squad, 3 fuel wagons, 4 protective department autos, and autos of the chief of fire department, senior deputy chief and four district chiefs. There were 12 engine streams thrown, from nine hydrants, 125 feet apart, with a pressure of 56 pounds from 10-, 12and 10-foot mains. Nozzle sizes used were and 1¼. There were 6,000 feet of hose laid. One deck gun was used to advantage. Considering the fact that the fire had been burning some time when the alarm was received, and had spread to all floors above the third, through a light shaft with unprotected windows, the fire stop of the department was spoken of by critics as splendid. The value of the building, which was four stories in height, covered an area of 80×120 feet, and had been built 46 years, was $300,000, and the contents $200,000. On this there was the comparatively small loss of $15,000 on building and $40,000 on contents. Several of the firemen were injured during the fire. Senior Deputy Chief John O. Taber, who was in command at the fire, thus comments upon it:

“On my arrival at the fire, box 1431, November 13, 1918, was directed to building No. 116 Summer street by a citizen who said that he saw paper burning on the top floor. I asked him if he was sure and he said ‘Yes.’ The door had been opened by the Protective Department, Engine Company 7 had started to run their line over the stairway to where the fire was supposed to be, on the top floor. Up to this time no fire had shown, except some sparks which appeared to come from the chimney on this building. Not being fully satisfied with the citizen’s story, I stepped back into the street and scanned the front of the building and saw fire on the second and third floors of building No. 108 Summer street. The chief of department was standing about the center of Summer street in front of the building. I turned and called his attention to the heavy dark red which was beginning to show in the windows. About this time District Chief Caulfield had discovered the location of the fire and forced the door leading to upper floors. Engines 25 and 39 had their lines run and on orders from the chief of department, followed Chief Caulfield over the stairway, operating immediately on the fire. Simultaneously with order to Engine Company 25, I was ordered to take the rear in Milton place. Truck Company 17 was also sent to take position in the rear, over which hose streams were run to the seat of the fire. Hose streams were also located on all floors above the first over the front and rear fire escape and stairways into the building, operating directly on the fire, which was racing up a light-shaft, 16×18 feet, located in the center of the building and extending from the second floor to the roof. It is fair to state that the light-shaft in this building was an extreme fire menace, due to its structural weakness, in that at each floor level the construction was of wood frame and ground glass, which allowed a rapid spread of fire to all floors above. That the fire could not be readily seen was due to the fact that the wellway in the center acted as a chimney, while the floor space on either side of it filled with heavy smoke, thereby helping to shroud the fire until the glass in the roof of the well gave way, thus releasing the confined heat and smoke, which naturally followed the line of least resistance and showed itself. That this fire had been burning for some time before it was discovered is evident, as at the point of origin it showed extreme smudging in that it burned downward through the timbers on the second floor, filling the place with heavy smoke, and thence upwards with the crumbling of the wood frame and ground glass in light shaft. This no doubt is what occurred before the arrival of the department, for finally, when released by the disintegrating of glass at top of light well, it showed on all floors of the building at about the same time. To the credit of the department it can be said that the fire was handled in splendid shape under the most trying circumstances of responding to a box with no person to give intelligent direction to first-arriving companies as to the location of the fire, a matter which is essential to efficient operation of force, especially where the fire does not show.” 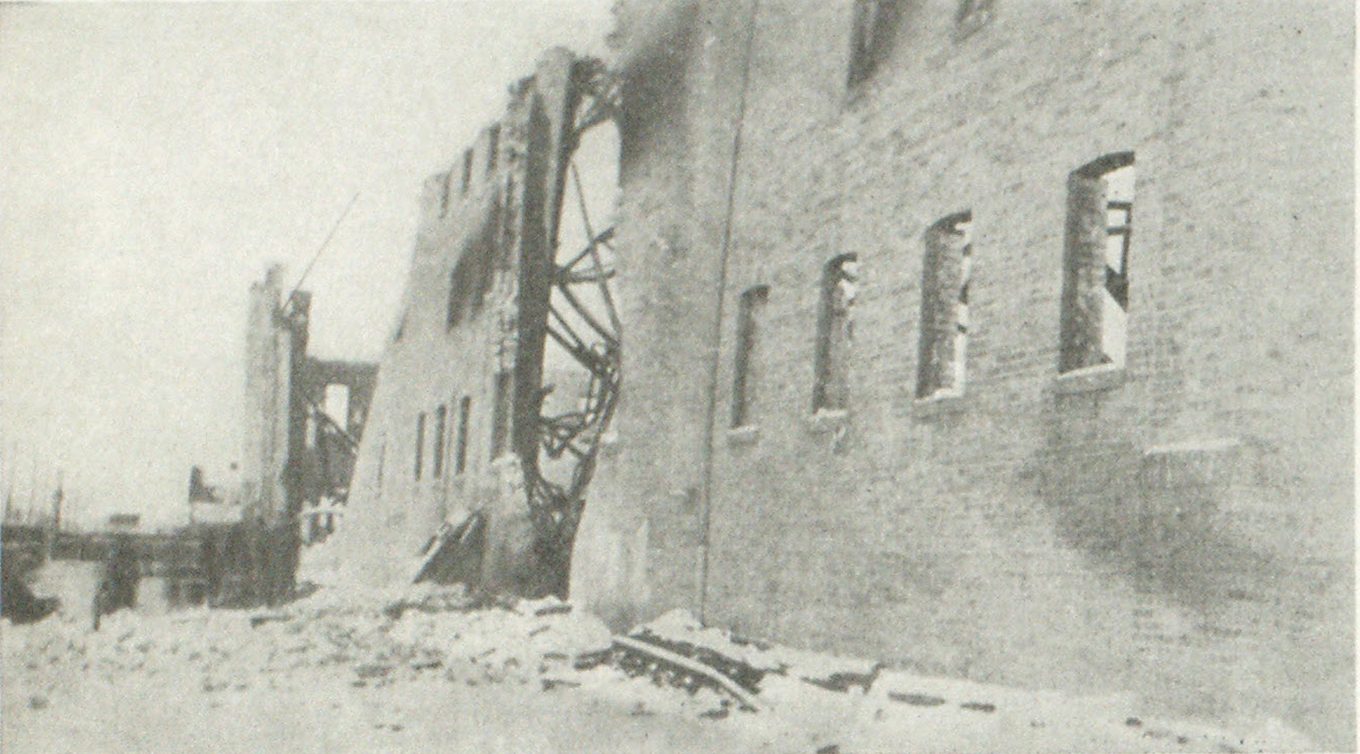 The following are among the important recent fires occurring in various sections of the country, which have been specially reported to FIRE AND WATER ENGINEERING:

A night fire on December 19, in thirty minutes, totally wrecked the great Winter Fair Building at Regina, Sask., Canada. The brisk fire had almost completely destroyed the 200×340 brick structure before the city department was notified by telephone at 2.55 a. m. about half an hour after fire was discovered. The building was on the Exhibition Grounds, and the Militia Department have been using it as a barracks for the sleeping, feeding and training of soldiers during the cold weather. The building was constructed for the holdng of fat stock shows every winter and spring, and was steam heated. There was a large arena in the center for the parading of show stock, and seats for about 5,000 people, with stalls for horses and cattle underneath the seats. It was an unprotected steel frame with outer brick walls, about two-thirds of the roof of wood and the balance of wired glass. All the inside was wood, including seats and offices. The Militia Department had floored the arena for drilling purposes and then the floor was oiled to keep down the dust. From an investigation it appears that no person in the building thought of sending for the fire department, but an alarm was sent by telephone by a man who happened to see the fire, and the fire had then apparently been burning from 20 to 30 minutes, as, when the fire department arrived, the east and south walls had fallen. There are several buildings on the grounds, which cover about 75 acres, including a row of 18 cattle stables directly south of the destroyed building. The nearest stable to the Winter Fair Building was on fire when the fire department, under Chief W. A. White, arrived and the next one was just catching fire. These stables are about 40×125 feet and 25 feet high, built of wood and separated about 15 feet from each other. The fire was stopped at stable No. 15.