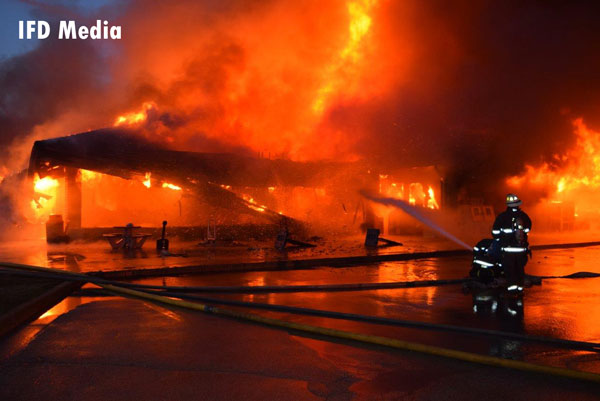 Heavy black smoke could be seen for miles Sunday as a fast-moving fire destroyed the Flying J/ Denny’s Restaurant at a truck stop in Indianapolis, Indiana. The fire was first reported to employees inside the Denny’s by truckers using the service facility. A restaurant manager ran outside along with two employees to see if they could put out the fire with an extinguisher, but were unsuccessful due to the heavy volume.

Although it is unclear exactly how the fire started, preliminary reports from witnesses say that the fire was on the outside of the building and the high winds pushed it into the structure. The manager and two employees ran back inside and alerted the employees and customers to evacuate. About 40 people were inside. All got out safely without injury.

Firefighters arrived to find the structure heavily involved; establishing a water supply would be no easy task. Thousands of feet of hose were laid to hydrants located on the southside of Thompson road, which promptly shut down traffic due the charged hoselines. The long layouts resulted in friction loss to the supply lines, and aerial ladders were having a difficult time getting good water pressure due to the number of lines all drawing water from the same main. The Indianapolis Fire Department called the local utility and asked them to boost the pressure, which helped, but the building was a total loss. Although the nearby gas pumps were initially a concern to command, the key positioning of master streams and handlines kept the fire from impinging on any of the pumps. A reported number of propane tanks were located in a storage area near the building, but none deployed.

Firefighters continue to hit hot spots from a defensive posture around the structure. Fresh crews will be rotated through, using four-hour operational periods. Investigators will begin to assess their ability to safely enter the structure once the crews have extinguished the hot spots. It is unclear how long the Flying J Truck Stop will be out of service. Management stated that the truck stop services about 2,000 trucks a day, with 100-200 on site overnight each evening. The fire loss at the structure fire at 1720 W. Thompson has been updated to $4 million.

RITA L. REITH is a battalion chief with the Indianapolis (IN) Fire Department and serves as the agency’s public information officer