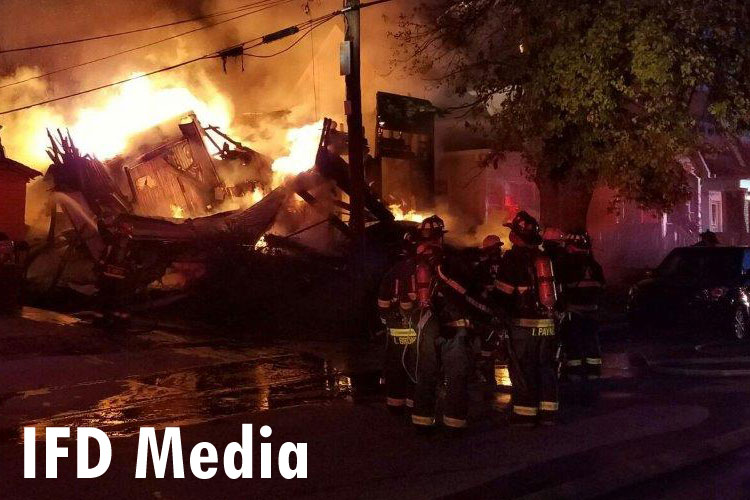 Indianapolis firefighters responded last Sunday to a fire that ravaged a two-story home on Terrace Avenue. Initial reports of people trapped inside the structure had firefighters fearing the worst after the house was destroyed, however the occupants were safe.

Fire crews spent several hours searching for victims after the fire, as frantic neighbors had reported to police and fire that the the home was occupied and that up to six people could be inside. Fortunately, fire investigators were able to subsequently make contact with the occupants, all of whom were accounted for and unharmed.

Firefighters arrived to find heavy fire showing from the two story house with flames threatening the home next door. With the main house already fully involved, engine crews deployed a 2 ½-inch handline to cover the exposure while others went to the rear to attempt entry. Within minutes the house collapsed. Crews battled the fire from a defensive posture, bringing it under control within 40 minutes.

Without the ability to conduct an effective primary and secondary search and still no communication with the occupants, crews began the process of hand digging out the structure. Using saws, shovels, and sheer manpower, firefighters worked intently remove the still-burning, collapsed piles of debris.  While concerns about the structural integrity of the remainder of the home and firefighter safety were at the forefront, the desire by all on scene to complete the primary search was palpable.

An investigation into the cause of the fire continues. Battalion Chief Dudley Taylor estimated the damage at $80,000.

Modesto Looks to Join Other Fire Agencies That Bill Insurance for...