LARCHMONT AND ITS FIRE DEPARTMENT.

The annual report of the chief engineer of the fire department of Larchmont, N. Y., for the year ending April 4, 1901, states that its manual force consists of 218 members divided into one engine company, one hose company, one hook and ladder company, one lifesaving and protective corps, one ambulance corps, and three auxiliaries. The life-saving and protective corps is composed of a detail from the companies of two officers and eleven men; the ambulance corps, of three medical officers, a captain, and a detail from each company. Those detailed to the auxiliary corps, both officers and men, live in the immediate neighborhood of their respective apparatus, which consists of hose, nozzles, lanterns, and tools. They are thus enabled to respond quickly to an alarm of fire. The engine, hose, and hook and ladder apparatus are equipped with swinging harness, or can be drawn by hand,when necessity requires. The apparatus of the department consists of one third-size single pump (Silaby) Ameri can engine; one hose wagon, equipped with 800 feet of hose, with one “Junior” extension ladder and modern appilances for extinguishing fires; one hook and lad der truck; fifty-foot extension trussed ladder; one thirty-five-foot rapid hoist; one twenty-four-foot, one eighteen-foot~ one fdurteen-foot; and bne twelve-foot roof ladder; two scaling ladders, twelve and fourteen feet; also life-saving and medical appliances in case of emergency; and the auxiliary hose, etc., as already described. The water supply consists of thirty-seven two-way hydrants, averaging about twenty pounds pressure. The department (according to the State law) held two department drills and one annual in spection and parade. On April 27, 1900, the officers of the department attended in a body the funeral of Mrs. E. F. Campbell, at St. John’s church, the Rev. Richard Cobden, chaplain of the department, officiat ing. On August 21, 1900, the department lost by death one of it~ respected members, William Nevilies, of engine company No. 2. A number of the members of the department attended the funeral at St. Augus tine’s church, the Rev. E. J. Powers, chaplain of the department, officiating. Several hotels and boarding houses were inspected, in reference to fire escapes,and, in compliance with the provisions of chapters 376 and 551, laws of 1896, the proprietors of those hotels and boardinghouses equipped their respective buildings with rope the-escapes.

The fire wardens, composing the fire council, were most attentive to their duties in inspecting the various buildings in course of construction and others in the village dnring the year: also in recommending and (in so far as it lay in their power) in enforcing the village ordinances relating to the location and storing of inflammable material endangering property. The Larchmont Horse Railroad company, through its president, C. A. Singer, presented to the department a tire-bell, which was placed on the house of Auxiliary No. 2. on Cliatsworth aveuue, as a further convenience for alarming the members of the department in case of tire occurring in that locality, or elsewhere in the village. Chief Mayhew W. Bronson thanks the fire council for its able support and advice in conducting the affairs of the department; the chief officers and foremen, for their help and interest displayed dnring the year, in upholding their respective commands to the highest standard of efficiency and discipline; the members, individually and collectively, for their work and diligence, which has characterized the department as a body of good, true, and competent men, ever willing to respond quickly to the call of duty, and that of saving life and property. It may be added that there are in the department twenty-eight exempt, fifty-five associate, and six honorary members. 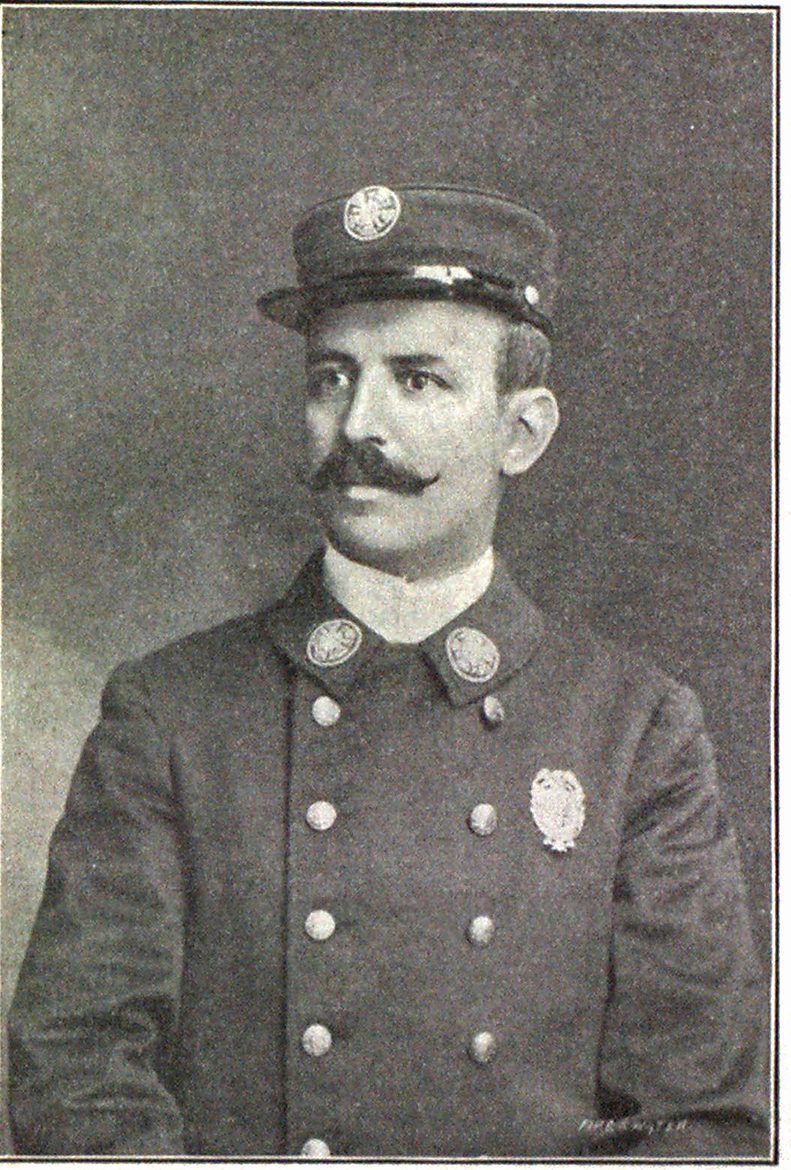 LARCHMONT AND ITS FIRE DEPARTMENT.

THE fire department of Larchmont, Westchester county, N. Y., is a volunteer association which numbers in its ranks several wealthy men, residents of the village which, as is well known, is a favorite place of abode for yachtsmen and others who have the time and money to devote to sporting and aquatic pursuits. Its chief is Mayhew W. Bronson, whose name is not unknown to Wall street, clubdom, and fashionable society.

Chief Bronson is a thoroughly trained and capable fireman. On being elected to the head of the department he was admitted to the training school of the New York city fire department at headquarters and took the complete course of twenty days. From it he came out an expert in fire service, and in turn has trained a body of firemen at Larchmont, who, though volunteers and many of them society men, are as bold firefighters and as punctual in their attendance at drill and actual fires as if they were members of a paid department. If they were not, Cnief Bronson would not allow them to remain as firpmen. He expects every man to be on hand when called upon and to do his duty as he does it himself. So efficient is the protection afforded the village by this organization, that, since it was established the board of underwriters has given Larchmont a much lower insurance rate than its neighbors round about.

Chief Bronson never spares himself either at drill (where he acts as chief instructor) or at fires, and in order that he may always be promptly at bis post, he has his bedroom connected with the fire alarm system and receives every alarm as do the fire companies themselves. He turns out at every second and third alarm, and has attended more than 200 fires in a year. In fact, no fire takes place anywhere near at which the Larchmont chjef is not present, if he is at home.

His men vie with him in diligence and have shown themselves ready to undergo all the training that is needed for the calling of a firemen. Although most of them are athletes and expert whips, yet every one of them has had to go through the necessary drill for jumping aboard a hook and ladder truck, an engine, or a hose wagon in the shortest possible time, and to hang on unflinchingly while the apparatus is going full speed and threatening every moment to throw them off their balance. In all these detailstheir instructor has been their chief, who himself had to go through an even more rigid course of training both at fire headquarters in this city and as an honorary, though in every sense a working member of companies in Centre and Chambers streets, Manhattan, where he spent, two weeks in being initiated into everything that goes to make an able fireman. Like the rest of his meu, he was already a good whip when he went into training, but that fact did not prevent him, as he does not suffer it to exempt them from being taught how to handle the reins so as to make the best time possible in speeding to a fire. And although Chief Bronson is an enthusiastic yachtsman, a member of the Larchmont and New York yacht clubs, and chairman of the New York Athletic club, he never suffers yachting or athletics to interfere with his duties as head of the fire department, any more than he will allow his subordinates to plead their fondness for yachting and other amusements as an excuse for absenting themselves from drill and fires.

The Larchmont fire department was originally organized in 1890, and was incorporated in 1891. It has gradually grown in efficiency, and now it has in total, 220 members. About 123 active members are on the list. These are divided into three active and three auxiliary engine companies, hose company No. 1, hook and ladder company No. 1. There are thirty-seven hydrants, all numbered and painted with aluminum paint; the pressure is direct; the supply is gravity. One third-size steamer (American), an improved (Gleason) ladder truck, about three years old, equipped with life-lines, and modern in all details, one hose wagon, three auxiliaries or jumpers, situated or located in different parts of the tow n make up the apparatus. There are ten men and one officer to each auxiliary.

Mr. Bronson took hold on the 6th of last April. The original chief was C. C. Little, who was succeeded by W. H. Campbell, predecessor to Mr. Bronson, whose first assistant is Julius Gerlach; second assistant, C. O. Hamilton; foreman of original company, C. A. Singer; assistant foreman, E. F. Campbell; hose company foreman, Lester Kiley; assistant foreman, W. S. Allen; hook and ladder company foreman, G. G. Murray; assistant foreman, T. J. S. Flint. The lifesaving corps (organized last year) consists of sixteen men, thoroughly drilled and uniformed. They have been through the life-saving work the same as at the headquarters at Sixty-seventh street, Manhattan, and have had ten weeks drill under the direction and instruction of Chief Bronson. Their commander is T. J. S. Flint, whose assistant is E. T. Dowling. The ambulance corps consists of three doctors of the village, D. and W. A. Bullard, Dr. J. A. Fordyce, Dr.H. A. Le Barbier, and Captain Arab. F. W. Flint (captain of the corps), and a detail of three men to the large corps-making nine all told. The fire council meets once a month. It consists of the officers, besides the nine members all told; chairman, Chief Bronson, three chiefs and two foremen to every large company; foreman and assistant foreman. The council runs the fire department. The expenses are met by an appropriation. Seven hundred and fifty dollars were appropriated last year by the village. Swinging harness and horses are provided for all the fire stations, the horses being kept convenient to the members of fire houses. The three companies located at headquarters are an engine company, ladder company, and hose company. Three thousand feet of hose are always on hand, with chemical extinguishers, four on the truck, and two on the hose wagon. The population of the village is 750 in winter and 3,000 in summer. The building laws are carried out under the direction of the chief and warden, as are also the fire escape laws Mr. Bronson, who is thirty-six years of age, and is also a deputy sheriff of the county, thus possessing power to act as a peace officer at fires, took charge in 1898.