Informal learning, or learning by observation, is an important and accepted form of learning for the American and Canadian fire services. According to our officers, that is how they learned much of what they know about leadership.

The North American Fire Officer Learning Leadership Survey1 asked approximately 500 fire officers what the source of their leadership learning was (Figure 1). Conducted at the Fire Department Instructors Conference International in 2014 and 2015, at the International Fraternal Order Of Leatherheads (F.O.O.L.S.) 2015 convention, at several state conferences, and through Ascend Leadership’s Web site, the survey found several notable and possibly surprising sources of leadership learning.

The officers gave the following as their top three sources of learning: observation (20 percent); formal fire department/academy training (20 percent); and experience, either step-up or in-grade (21 percent).

When discussing fire service learning, one imagines the recruit academy instructor showing the recruits a new skill. Beginning with safety precautions, the instructor outlines when to use the skill, provides a step-by-step practical lesson, and concludes with carefully monitored practice. This formal learning is what we generally think of when we think of training or education- i.e., a class taken with the fire department training division, the state fire academy, or a similar institution. It is highly structured, often classroom-based, with a curriculum that includes specific course objectives and program completion requirements. It can range from programs to meet the National Professional Qualification Standards for firefighter, fire officer, or driver/operator or for a new fire department procedure or a new piece of equipment such as a different brand of self-contained breathing apparatus. Although in learning skills “vision” is a key component, it is not the kind of observation that relates to learning leadership.

Informal learning is the part of our learned skills attributed to observation that occurs outside of the set curriculum. It can occur in conjunction with formal learning but is distinct in that the learner, not the instructor, controls the learning, often unintentionally. It isn’t self-study; it is information gathered through associated activities and learning-e.g., working and talking with the other students, performing a task, or solving a problem.

For example, a member of your firehouse shows your crew a new (and hopefully safe) “trick of the trade” learned from an online fire scene video he saw on fireengineering.com or Youtube. Or, you saw somebody else do something that worked really well and tried that method or solution yourself.

Informal learning occurs more frequently in adult learning. It recognizes the social significance of learning from other people outside the classroom or the drill ground. This is learning that happens through observation in the firehouse, on the scene, or at other times and places as we interact and work with our company and others.2

The recipients of the learning (firefighters and officers) may be unaware of the information they have absorbed through observation and their ability to access that information when needed. How often have you faced a situation that you were not specifically trained to handle but still “knew” what to do?

Often, an officer’s positive capabilities are attributed to his seemingly natural instincts and his personal experience, but that knowledge may often have been obtained through observing what has and has not worked in different environments (informal learning) vs. formal training. Moreover, although others make the decisions or take the actions, the recipient learns from them nonetheless.

Sometimes this learning comes from personal, firsthand experience of what happened. Or, it is obtained secondhand through others or passed on by the learner himself and, most often, not in a formal classroom setting (“war stories”). The personal significance to the learner can anchor that knowledge in the memory for later access, especially if that is one that is accessed and thought over. This is especially true in fire service experiences involving danger, personal significance, emotional ties such as personal involvement or association with those involved (e.g., the fire service “family,” your family, connections to loved ones or involved people), success or failure, and even fun or humorous events.

A recent study regarding informal workplace learning said that many groups “still equate learning with formal education and training and assume that working and learning are two quite separate activities that never overlap, whereas our findings have always demonstrated the opposite-i.e., that most workplace learning occurs on the job rather than off the job.”(2)

The results of the North American Fire Officer Learning Leadership Survey seem to back the concept that most of the workplace learning occurs on the job-not in the classroom or the drill ground.

What Is Learned Informally?

Although it does not specifically focus on the firehouse environment, Michael Eraut’s study “Informal Learning in the Workplace” is completely applicable to it. That is where new firefighters learn from the more senior personnel about all of the aspects in Table 1; and as they mature in the fire service, that source of learning continues to be significant. Much of the firefighter and fire officer’s technical and interpersonal knowledge is learned outside of the classroom and away from the books. Much of our learning occurs while we’re wearing turnout gear and often around the kitchen table. Much of it even occurs while in the firefighter docking station (recliner)-listening and participating in discussions of responses and events.

The Importance of Informal Learning

Just based on the amount of learning obtained informally through observation, it is quite important. Yet, as discussed above, what specific knowledge and skills informal learning can contribute is fuzzy.

At a recent F.O.O.L.S. convention, Mark VonAppen related a story about a ladder company that was operating on a commercial building’s roof when one of the firefighters had a “funny feeling” in the pit of his stomach, as if he were on an airplane in turbulence. Years before, an officer had told that firefighter of getting such a feeling just before the roof on which his personnel were operating collapsed. Now this firefighter had that same feeling, recognized it, and immediately reacted by telling his crew to run to the roof’s parapet. As they ran, the roof collapsed, but they had made it to the parapet; ground ladders were quickly raised, and they made it to safety. The firefighter who “recognized” what was going to happen was not at the fire that his past officer had told him about and he had never personally experienced the sensation, but he recognized the warning his equilibrium and an officer from years before was sending him. That was informal learning, and we can institutionalize many of those “nuggets” of informal learning that are so often attributed to instinct. 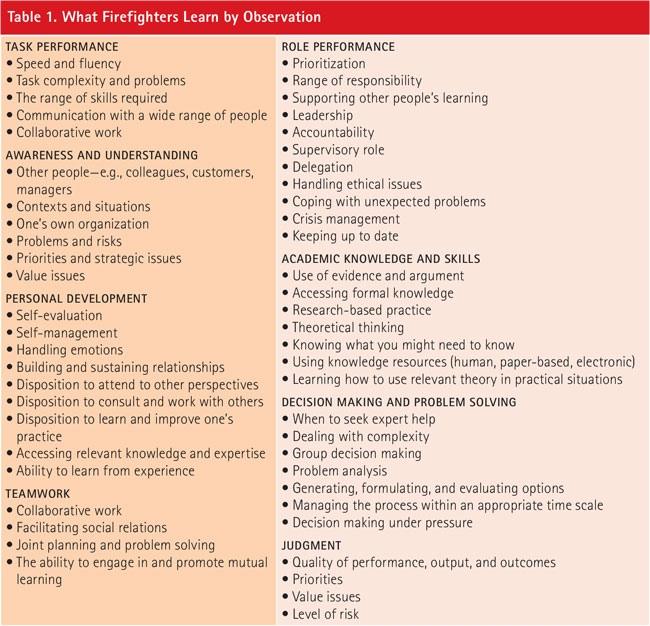 Parents tend to be blamed for or credited with a person’s upbringing; likewise, you may think of firefighters in your department who can credit or fault their early officers for the members’ professional standing. How often have you heard a firefighter say or do something and you immediately pictured his early officer? This can be good or bad.

Another aspect of informal learning that we find in our firehouses is the community of practice, “a group of individuals bound together by a shared expertise and passion of a joint activity or common interest.”3

As discussed earlier, we learn in our community of practice through interacting with other firehouse colleagues. Working together, training together, talking about events, and sharing activities all provide us with new informal knowledge “that is woven throughout the fabric (culture) of the community and becomes integrated into the community’s values, beliefs, languages, and ways of operating.”4

What gets “woven” into your fire department’s fabric? That comes from the leadership, much of it not from the top. What message or shared values do the personnel obtain beyond the technical skill sets and technical knowledge?

Although another study5 did not specifically concern the fire service, its findings are applicable. It considered the Texas A&M University Corps of Cadets regarding the effects of the structured lifestyle, interdependence, and clear objectives on leadership development and student success beyond their education and training.

Most often, we see a new skill (a physical application of equipment or tools for a specific objective, such as a new method of self-rescue from a window) and we try it, practice it, and then engrain it in our memory. Knowledge-how we would mentally respond or react-is much harder to “practice.”

How does a company or training officer use this informal learning to improve personnel and himself? Developing a method to share the information can be very challenging. The easiest method to employ is the all-important after-action meeting.

An after-action discussion is a great source of learning and can help clarify your expectations for your company. What firefighters observed and did can be transformed into more formal learning for responses that went well and for those that didn’t. The officer must act as a mentor and ensure the company knows this is not a blame game but a method for ensuring that the members do better. When calls go badly, emotions are raw and personnel become more defensive.

Keep the following points in mind:

Other Informal Learning Methods What If …?

Building a program that can use an individual’s informal learning and transform it into more formal learning can be difficult, but it is not impossible. Scenario-based training (“What would you do if …?”) that brings out the informally learned lessons can help make the user’s information more accessible for the emergency scene or in interpersonal leadership situations. Explore the best participant responses by asking that participant, “Where did you learn that?” Often, it will involve a past incident with information learned from observing someone else’s actions. This draws out the individual’s informal learning and moves it into a more formal context.

Do not limit this training to strategy, tactics, and tasks; it is also effective in supervision and leadership since it provides challenging scenarios that officers will need to handle. For the scenarios, you can use commercially available videos and simulations, or you can make them. You can discuss incidents that were covered in the media, in fire service magazines, on blogs, or in purpose-written scenarios. How you use any of them is extremely important. Draw out answers to “What would you do?” and build discussions and healthy debate on the responses.

An excellent training method is to have several experienced officers serve as a panel (the Kitchen Table Debrief) and, after the students respond to the “what-if” questions, have the panel tell the students how they dealt with a similar incident and learn from their experiences.

DAVE CASEY, EFO, MPA, is the director of the Louisiana State University Fire & Emergency Training Institute and co-authored The Right Seat video series. Previously, he served as Florida’s state training director and as the chief of Clay County (FL) Fire Rescue. He is a managing partner of Ascend Leadership LLC.