By TIMOTHY PILLSWORTH and WILLIAM MORRISSEY

At any time of the day or night, we can be dispatched to that one call that many will talk about for years to come. It is the call for help that we typically did not train for very much but that we must be ready to act on properly. In the following case, it was a bariatric rescue call. Many believe that they have been part of a similar call in the past. However, in many cases, they have not responded to the “most challenging” call.

Although we might see a morbidly obese person during our routine travels or we are challenged with a larger patient on an emergency medical services (EMS) call or a motor vehicle accident, the most severe bariatric cases are typically hidden from sight. The most morbidly obese people are usually not in the view of the public because of their limited ability to walk, drive, use standard transportation, or even stand. We typically encounter these worst-case patients in their homes or apartments—sometimes in a room that they have not left in many years—because of their large size and lack of mobility. This was the case for the Washingtonville (NY) Fire Department (WFD) on a recent call.

The WFD was dispatched to assist on an EMS call, which is rare but not unheard of. In this case, it was a mutual-aid request with a 15-minute or greater response time to a district to which we typically did not respond because of the distance from the station. Our bariatric net was special-requested to assist in removing a patient suffering a medical emergency. WFD Car 1 and Rescue 581 responded with a full crew to assist.

On arrival at an apartment building, the local paid advanced life support (ALS) provider and volunteer fire department briefed the chief. A woman who weighed approximately 600 pounds was in her bedroom experiencing chest pains and needed transport to the local hospital. Although the ALS provider had a bariatric stretcher and ambulance, neither the ALS provider nor the local fire department had a device that could remove the patient. The EMS bariatric stretcher is designed to be much larger and stronger than a standard stretcher to allow for the greater weight and size of the patient. With its much larger size, it would not fit through any of the apartment doors. The ALS provider attempted a standard clothing/bedding lift prior to the WFD’s arrival, but it did not work because of the patient’s size. After responding to a previous bariatric emergency, the WFD purchased a bariatric rescue net (photo 1) and placed it into service. The net is a large cargo type with a weight capability of more than 4,500 pounds (photo 2) and has many spots onto which rescuers can grasp. 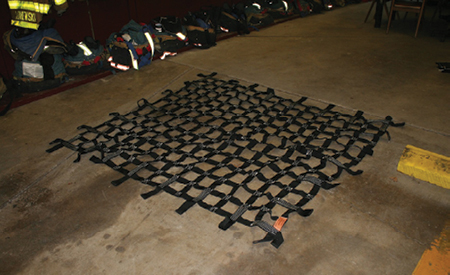 The size-up showed that the overall size of the female patient prevented her from passing through the bedroom door; a standard interior household door is only 32 inches wide. To allow movement from the bedroom, the door and door frame were removed. This is where some thinking and knowledge of the building construction class came into play.

By removing the door and door frame, we gained an additional two to three inches in door width, allowing us to remove the patient from her bedroom. Fortunately for the rescuers, the apartment was on the first floor and had a sliding door that led to grade level. If this sliding door was not there, we would have had to remove the front door as well.

Because of the patient’s size, the hospital requested both fire departments and EMS to respond to the emergency room (ER) to assist in turning over the patient to the hospital staff. On arrival, she was transferred from the bariatric net to a bed in the local ER.

Not every department needs to have every rescue or firefighting tool on the market. However, it is important that—within certain areas or close regions—you have special tools such as bariatric nets available. For this incident, the WFD’s response time was 15 to 20 minutes from dispatch to arrival. If this was a life-or-death call, the outcome most likely would have been different. Because we live in a litigious culture, lawsuits can be brought to the ALS/EMS provider or the local fire department for not being properly trained and equipped. It’s sad, but that is our reality.

Take the time to discuss where such devices are located at a battalion meeting or ask the county’s fire leadership to determine their location; it is important to know this prior to any alarm. Thankfully, our county dispatch center has a list of special equipment that each department has in service. Additionally, if there is a paid ALS/EMS company that covers the medical side, see if they have or can purchase the piece of equipment that fits that need.

It is also important to understand basic building construction for alarms other than fires; this knowledge can go a long way for a response such as the one mentioned above. Knowing that a door frame or roof opening on wood-frame (type V) construction is generally between two to three inches wider than the finished door frame will allow for a simple enlargement with minimal damage to the building. With a masonry-constructed (types I, II, and III) wall, the door jamb can be fully grouted or left hollow. If it is hollow, you can cut a four-inch or wider opening in the door jamb with a reciprocating saw and make a removal with a set of irons. Both of these methods will cause damage, but nothing that the building owner cannot repair. 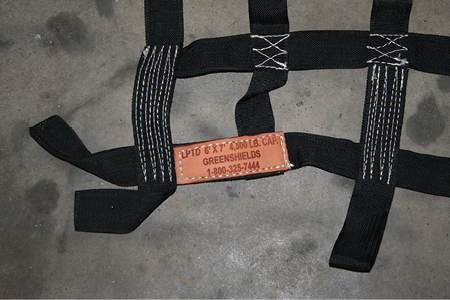 If you require a larger opening for the removal, do a quick inspection of the door frame and use the tools at hand. Also, use a thermal imaging camera (TIC) to quickly scan a wall to see if any supply or return piping is located within the wall. To help with the camera’s vision, go to the floor above and turn on a faucet and flush a toilet to move water though the pipes; this will create greater temperature contrast for a better visual. If the TIC picks up pipes within the wall, don’t open the wall in this location.

Look for and be careful of electrical wiring within the wall. Although outlets and switches will be visible on the face of the wall, wiring traveling to an upper/lower floor will not be visible. The TIC could pick up a wire with a power load, but you cannot always count on that.

Ask yourself if you are looking at an interior or exterior load bearing wall. Removing portions of such walls always presents the possibility of precipitating a collapse. That said, in most cases, opening a wall in a wood-framed structure by removing several studs will not affect the overall strength of the wall in the short term. Three studs at 16 inches on center will offer 48 inches of width for removal. Much like enlarging a window during a firefighter assist and search team/rapid intervention team operation, the wall framing has enough redundancy to allow for the removal of a number of studs without compromising the wall’s integrity for a short period. Prior to creating a large amount of damage to the building, ensure that this is the only way to remove the bariatric patient.

As with all calls, work on “Plan A” while someone else prepares a “Plan B”; things do not always go as planned. As with many rescue operations, the scenario above was staffing intensive. As with all alarms, start the size-up at the time of dispatch. At or prior to the response, ask yourself, “Why is there a need for a ‘lift assist?’” It could be as simple as needing emergency medical technicians on scene for a bariatric rescue. The arrival of just a few firefighters may not offer enough hands. As with all alarms, it is easier to call for assistance and have members return rather than need their assistance 10 minutes before arrival.

This incident occurred on the first floor with access through a large sliding door in the rear. What would the options be if the patient was on the second or even third floor? Is there an elevator, or would the stairs be your only option?

Just like with everything we do, it comes back to training. We typically get plenty of hours each year training on pulling hoselines, throwing ground ladders, and cutting cars. However, when was the last time your department reviewed simple tools such as the reciprocating saw, the circular saw, or any other rarely used rescue equipment? Many will ask, “Why do we need to train on a reciprocating saw? It’s a very basic tool all of us have used before.” Although this could be true, there are members within all departments who may not have any experience with some common tools. During the alarm is not the time to find out who this is.

Continue to train on all the basic “bread-and-butter” operations, but do not lose sight of the other calls for help you will encounter during your career. Use all the training and tools at your disposal, and pull ideas from those on the call. It can and will make the difference.

TIMOTHY PILLSWORTH is a 32-year fire service veteran and a member of the Washingtonville (NY) Fire Department. He is also a former chief and life member of the Winona Lake Engine Company in Newburgh, New York. Pillsworth has presented at FDIC International, the New York State Chiefs, the Firemen’s Association of the State of New York, and other local and regional conferences on engine company operations and leadership in the volunteer fire service. He has authored and coauthored articles on personal protective equipment (PPE), volunteerism, engine company operations, attack system flow testing, and volunteer fire department management and planning. Pillsworth is the author of the PPE chapter in Fire Engineering’s Handbook for Firefighter I and II. He is a project engineer for the Army Corps of Engineers at the U.S. Military Academy in West Point, New York.

WILLIAM MORRISSEY is a nine-year fire service veteran and a career firefighter with the Newburgh (NY) Fire Department. He began his career with the Washingtonville (NY) Fire Department. Morrissey is a nationally certified Firefighter I and II and has numerous New York State fire certifications and NYS EMT licenses. Morrissey also has a bachelor’s degree in psychology.