I have just reread “Letters, Thoughts, Opinions” (Bobby Halton, Editor’s Opinion, November 2020). I concur with the point on resisting efforts of forced means of speech. That can only encourage further dissention between people with distant points of view rather than drawing them closer together.

When someone happens to ask me what my father did for a living, I say that he was a “fireman.” That was what his job was called when he did it for the Fire Department of New York (FDNY) from 1947 to 1976.

If someone were to ask me today what kind of work I do, I’d tell them I am a writer and lecturer. But I would be most proud to tell them that I was a chief or, more likely, just say I was a New York City “firefighter” simply because that is the job title we are most accustomed to using today.

I do support the hiring of qualified women and minorities in the fire service. In fact, I served for many years as the Equal Employment Opportunity representative for Division 7 in the FDNY. All people deserve to be treated equally. However, there is a danger in placing too much emphasis on terminology. Actions, rather than words, are most effective in accomplishing change. The victims being dragged out of a smoke-filled apartment don’t care if they are being rescued by a fireman or a firefighter. They just want to live.

I liked the Editor’s Opinion in the November issue. To me, “fireman” is a person in the fire service. It does not denote the gender of the person. It is not “fire man.” Fireman, doctor, attorney, and teacher are all professions and no reference to gender. I try to use the term “firefighter” but I often use “fireman,” and when I do, I am referring to any member of the human (although some think I should say “huperson”) race who belongs to the fire service. And, after all, if people want to nitpick, “firefighter” is no longer an accurate term if you consider the percentage of calls that actually involve fighting a fire. It seems to me that one is being more inclusive when all are considered worthy of being called the traditional name regardless of gender. Of course, as you say, each is free to their own opinion and language, and that is mine.

I’ve had the November issue of Fire Engineering sitting on my desk for weeks, but only today did I crack it open. In a word, I can describe this issue: Outstanding! However, what really prompted this message is “Letters, Thoughts, Opinions.” I couldn’t agree more, and I just want to say thanks to Editor Bobby Halton for standing up for his (our) freedom of speech and for fire service history and tradition.

Identifying Buildings from Outside

Duane Daggers excellent article “Identifying Building Layouts and Hazards from the Outside” (January 2021) brought back an old FDIC memory that still rings true today. In the hallway after one of Bobby Halton’s always inspiring talks, I stumbled on Frank Brannigan talking with a few other Fire Gods the likes of Jerry Tracy, Jack Murphy, and others. To be a mouse at that conversation was worth the FDIC trip itself. I dredged up enough courage to ask a question that had long been on my mind. Truss failure under a fire load was the hot topic of the day, so I asked, “Frank, how should the fire service be dealing with this new truss hazard?” In my mind, this was a reasonable question.

If you ever met Frank Brannigan or heard him speak, you know he got right to the point, and he did this time as well. Something to this effect came out: “Good God, Jerry, did that building just land from Mars? Why don’t you know the trusses are in there?” Without taking another breath, he continued, “Why don’t you know what type of construction is in your district?” Of course, I did not have an answer, so I responded with something bright like, “Good point,” as I endured his stare. His response was at decibels far above what I would have liked, but other FDIC attendees within about 20 feet profited from the answer.

So, the point is this: Daggers’ summary of reading a home from the outside contains excellent size-up considerations. Why don’t we all have a floor plan (and hazard list) of the building show up on our computer in the rig on the way to the alarm? The building you are going to risk you and your crew’s life in did NOT “just land from Mars” and likely has been there for years, so why do we have to attempt to read it from the outside, at zero dark 30, with smoke pouring out the windows? We all know how critical construction features may not be visible from the outside. It’s 2021; we are landing spacecraft on asteroids thousands of miles from earth. Could we program the fire alarm system to transmit this critical information to us along with the basic alarm?

In the article’s conclusion, Daggers suggests a possible solution to increase our odds at surviving the hazards of a fire: “Get out in the run area and look at what you have around you.” This is excellent advice that we all should heed. Some fire departments have done a great job obtaining and capturing this information. It is a facet of the fire service that Jack Murphy and Jerry Tracy profess often in Fire Engineering—how important it is to have preincident building intelligence and, in fire service terms, know before you go. Some departments have not done as well with preincident intelligence. How successful would armies be if they threw their soldiers into battle without knowing the terrain, enemy strength, scheme of maneuver, deception plan, weapons they will face, and so on? Is there any excuse for us not knowing the most basic deadly construction features pointed out in the article? Is there any logical reason it should not show up on dispatch information or our mobile data terminals on the rig?

Sure, it is more fun to have a bigger challenge when you roll up, trying to guess if the construction features will be a hazard and possibly kill your members. That makes it more mano-a-mano and better for our ego—and more fun. Ironically, the letters F-U-N are the first three letters in the dreaded word “funeral,” which is often preceded in our world by the word “firefighters.”

Many years ago, I was the junior member on my engine company; we were having great fun one cold evening as we pushed a 2½-inch handline into a fully involved clothing store in a strip mall in zero visibility. We heard a crash, the floor shook to our right, and we retreated. Our goal was to push in and congratulate ourselves when we exited the rear after extinguishing the fire. Continuing with our mission without any intelligence (of the fire building or our own), we reentered the building until another crash on our left side shook the floor and we retreated permanently. After aerial streams extinguished the fire, we noted the unprotected steel beams twisted, causing the two heavy heating, ventilation, and air-conditioning units to fall from the roof, narrowly missing us, twice! Although great fun, it was a very close call that could have resulted in several line-of-duty deaths. We should have known and respected the hazard.

The information contained in Daggers’ article is superb and, as he says, is a good a review for senior members and maybe a revelation for junior ones. The question remains, why are we still guessing from the outside? If we combine a little effort (ours) with existing technology, this critical information will be available so we can, as military commanders say, “prepare the battlefield” to put the odds in our favor. In fire service terms, know before you go will put the odds of winning the battle or mutual murder contest [as Chief (Ret.) Alan Brunacini, Phoenix (AZ) Fire Department, described fires] in our favor. The more we know before the fire, the fewer firefighter funerals we will have to go to after the fire. Less fun on the fireground will mean fewer “fun-erals” after the fire, which seems to be a pretty good trade-off. 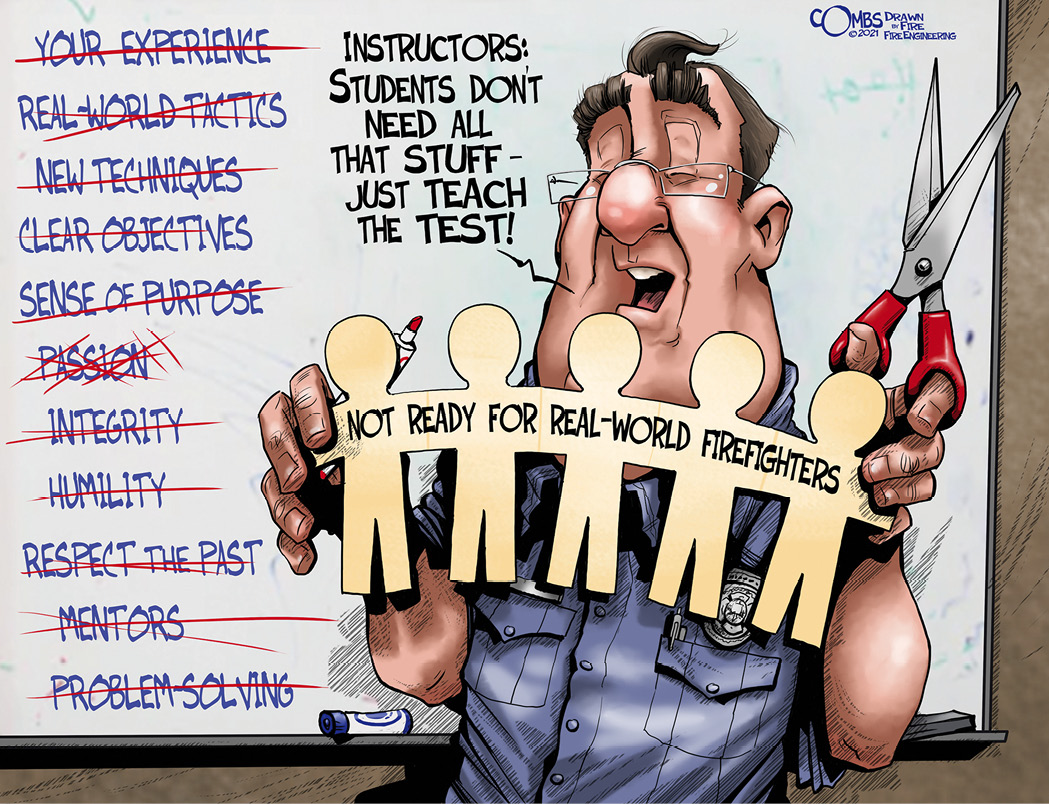