“The Economic Benefit of Firefighting” by Dave Waterhouse (Fire Engineering, March 2021) was a much-needed exploration of this topic. For years, I have said that there is too little explanation of the cost/benefit of fire, emergency medical services, and law enforcement.

I was particularly pleased to see that my own department, Orange County (FL) Fire Rescue, had conducted such a survey. I know of one insurance company that would conduct a cost/benefit analysis to show the benefit of its loss prevention department. To see this excellent tool applied to emergency services is refreshing. Too often, these agencies are viewed as a cost with little recognition of their value other than the immediate response when needed.

Bravo again. I encourage all departments, big and small, to use this process to help their efforts to secure funding for training, equipment, personnel, and so on. Include as many factors as possible. You many even want to look at the local economic impact of areas that have had devastating fires with high property and job loss.

Not All Fires Create Smoke

If a house catches fire and no one is around to see it, does it create smoke?

It was around 6 a.m. when Engine 3 pulled up to 139 Grayson Street for a report of an odor of something burning in the area. Captain Smith got out of the rig and surveyed the street only to see a long row of cookie cutter houses, parked cars lining the curb, and a few early morning joggers. He didn’t see any smoke, yet there was a faint odor of structure fire. It’s the smell that every firefighter knows and indicates, “Yep, we’ve got a job!”

There was no job, though. Where was the fire? The rookie pointed to the two-story house at 139 and said, “Cap, check out the windows!” Captain Smith noted that the windows were charred black, the front door had soot stains around the frame, and the unique smell of structure fire increased as he approached the porch. He got on the radio and called for a full assignment from dispatch, got his crew organized, pulled the preconnect, and prepared to make entry.

As members forced the door, they saw an amazing sight. They expected to have a wave of smoke and heat bellowing past them as they breached the doorway, but there was nothing of the sort. The walls were completely cold. Not even the slightest wisp of smoke could be found, yet everything around them was completely burned. The furniture was reduced to springs and metal frames. The television had melted down the wall it was mounted on. The door frames had deep alligator charring, and it appeared that fire had physically touched every part of the house. The fire came, ravaged the home, and then burned itself out.

Captain Smith headed upstairs to check the conditions. As he headed down the hallway of the second floor, he found the first two bedrooms in the same condition as the rest of the house—burned beyond recognition. Then he came to the end of the hallway where there was a closed door. He opened the door to find an unbelievable sight—a bedroom that was completely untouched by fire. The bed was perfectly made; the blinds were drawn back, allowing the early morning sun to shine into the room; and a freshly pressed suit was hung on the closet door.

So again, if a house catches fire and no one is around to see it, does it create smoke? As I reflect on the early years of my career, I honestly believed that nothing could mentally affect me. I remember the time that I was eating spaghetti and found brain matter stuck to the underside strap of my watch. It was from a shooting victim we had earlier in the day, and it just happened to go unnoticed. The victim just wanted to see his son and the child’s mother wouldn’t open the door. So, as the dad pounded on the door and shouted, the new boyfriend decided he would solve the issue. Two pulls of the trigger at point-blank range, and the pounding on the door ceased; so did the dad’s life. Back at the station, I was more distressed that I had to stop eating because the food was so damn good.

Then there was the time that I was walking down the interstate after a tow truck driver got hit by a passerby as he was loading a disabled vehicle onto his truck bed. Witnesses stated that his body exploded—and they were right. I walked by his right arm, his hips, some intestines, and a foot as I approached the accident scene. It seemed as if his body was scattered over a quarter of a mile of the highway. Standing there on the side of the interstate, gazing at a work boot that had a severed foot still inside it, a significant thought came to my mind. It was at that moment that I realized that there was still one piece of chicken parmigiana back at the fire station; I sure hoped no one got to it before I did.

On emergency medical calls where patients were experiencing mental emergencies such as depression, anxiety, or suicidal feelings, I tried my best to relate to them. I always displayed amazing bedside manners and pretended to care, but inside I just couldn’t understand how they got to their current state. Despite being trained on it and seeing it day after day, mental illness remained a foreign language that I had no intention of learning.

I always thought the 1986 heavyweight boxing champion was a pretty clever guy, even with a lisp and a uniquely high-pitched voice from thin vocal chords. Mike Tyson once said, “Everyone has a plan til they get punched in the face.” Though he may not agree and I’m definitely not about to start an argument with the former champ, I’m pretty sure he was prophesizing about my life. For me, I have now redefined Fire as a significant event that you engage in or witness that severely impacts your thoughts, normal habits, and/or actions. Smoke is now redefined as the problems that are a result of the fire.

It wasn’t until 1 a.m. on July 1, 2012, that I learned what fire really was. As I stood next to my wife in the living room of our home, holding our dead baby in our hands, the fortress that once fortified and protected my mind was obliterated, and I was left completely vulnerable and lost. As a husband who always had the words to comfort my wife, I became a mute. As a man who enjoyed being a problem solver, I had no answers. So, what would any reasonable person do six hours after holding their dead child in their hands? That’s right, I abandoned my wife by putting on my “mask” of confidence, resilience, and leadership; then I went to work at the fire station.

A therapist once told me that the reason I abandoned my wife and left her to manage her grief alone is because I was in shock. I didn’t have answers or a solution to this issue, and it was so severe that I was on automatic pilot mode. I didn’t know how to plan a funeral, I didn’t know how to guide my family through this, and I didn’t know what to think or do within my own home or around my family. I was hanging onto the one thing I had certainty in, and that one thing was firefighting. So, at 7 a.m., I pulled into the parking lot of the station and went to work as a fire captain, supervising a crew of seven.

My “mask” was the only thing that hid my inner pain, and I wore it so well that no one ever had a clue that I was slowly burning away inside. On a daily basis, it took all the energy I had to hide my suffering, and my mind was left completely defenseless. The emergency scenes I responded to were no longer routine; they were becoming exponentially more stressful. After returning from calls, I often found myself casually retreating into my sleeping quarters, where I routinely ended up tightly holding a pillow to my face as I cried uncontrollably while lying in the fetal position.

The horrific events that I witnessed while on the job now branded me and added fuel to my fire. The smoke that followed was filled with depression, acute stress disorder, post-traumatic stress disorder, anxiety, panic attacks, dissociative amnesia, auditory exclusion, insomnia, nightmares, obsessive compulsive disorder, and suicide ideation. All the mental illnesses that I previously thought I was impervious to now riddled my soul. My parents always supported me to continue with my education after I received my bachelor’s degree; I don’t think a master’s degree in pain and a Ph.D. in suffering are what they had in mind.

My name is David Matthew Lewis, I’m a battalion chief with the Newport News (VA) Fire Department, and the house at 139 Grayson Street is me. I had a significant fire inside me that almost burned me to the ground. I nearly took my own life because the pain was so great and I honestly believed that the terrors of life outweighed the terrors of death. The fire didn’t get all of me though; some parts remained unburned because of closed doors, and those are the areas that saved me. I’m not sure who closed the doors, but I’m forever grateful and will now do all I can to help my brothers and sisters.

Through extensive therapy, I’ve been able to repair and replace the furniture, fix the walls, replace the trim, and get a new television. Even though a lot of my house isn’t original, I’ve been able to closely mirror what it once was. Most importantly, it’s still standing. The pain I personally endured, the scars I left on my family, and the danger I placed my crews in will forever be a burdening reminder as to the choices I’ve made. Oh, the stories I could tell you!

There is, however, beauty in the ashes. I know that there are thousands of first responders out there suffering in silence right now. I know that every person has a version of 139 Grayson Street. If this is you, I hope you can find peace in knowing that it’s okay to not be okay. I swear to you that it does get easier, but it undoubtably takes significant strength and courage on your part to get the help you need. The fire service is a beautiful profession, and we all strive to maintain its image, even at the cost to our own health. There is, unfortunately, a warning label attached to this profession, and the message is getting louder. We cannot continue to stand by and lose our brothers and sisters to suicide.

My life’s work is now educating departments on mental health and developing mentally healthy workplaces in hopes of impacting lives and promoting vulnerability. Not all fires create smoke and, like the tree falling in the forest, cries for help are sometimes silent, but you are heard and you’re not alone! Until we meet, fight! 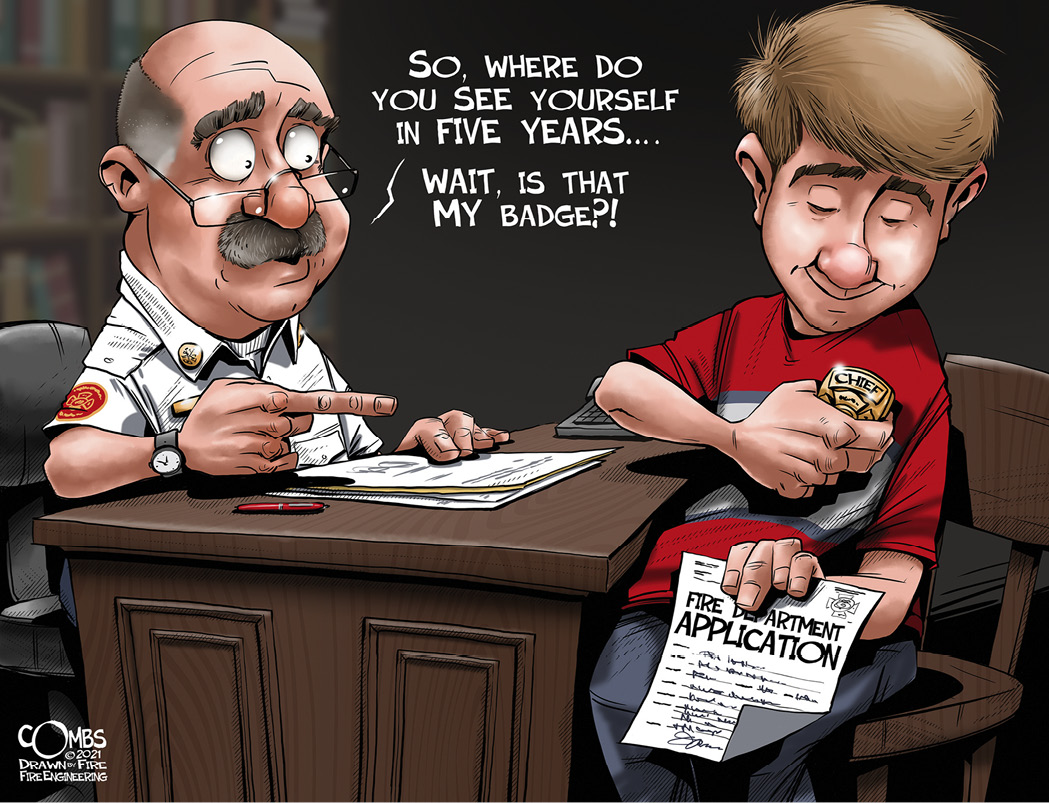