In the past few years there has been an increase in the number of top-floor fires. Top-floor fires generally morph into multiple alarms with heavy losses. Historically we would get a few top-floor fires and sometimes the fire would extend into the cockloft[1]. More recently, however, fires are not starting in the top-floor apartments but rather in the cockloft itself. It appears that the electrical BX wiring that runs through the cockloft is causing this new fire problem (photo 1). 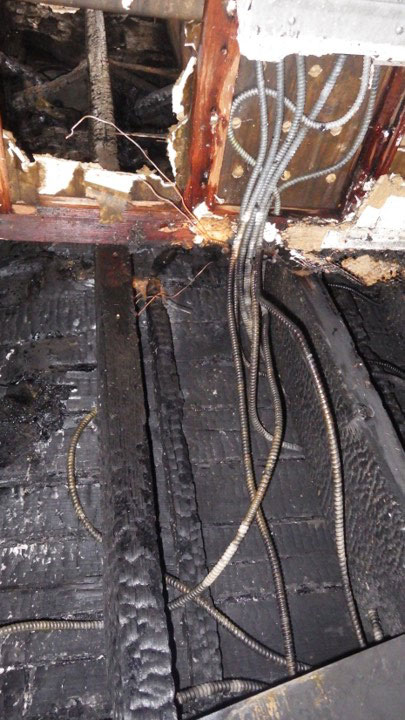 The fires that start in the cockloft and go undetected for a long while before presenting are creating advanced fires on arrival. Companies are being called for an investigation of an odor smoke in a building and are frustrated because of the difficulty in locating the fire. Heavy blown insulation (photo 2) and multiple ceilings (photo 3) are keeping the problem hidden for longer periods of time. This doesn’t pertain only to top-floor fires but also to any odor of smoke. I am not quick to dismiss any odor of smoke. It’s easy to give up and attribute the call to an odor of smoke that is dissipated, but if you are wrong it can be a major problem. 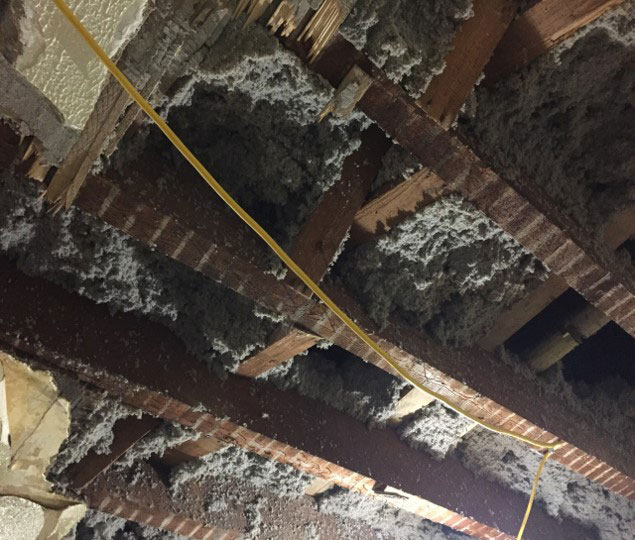 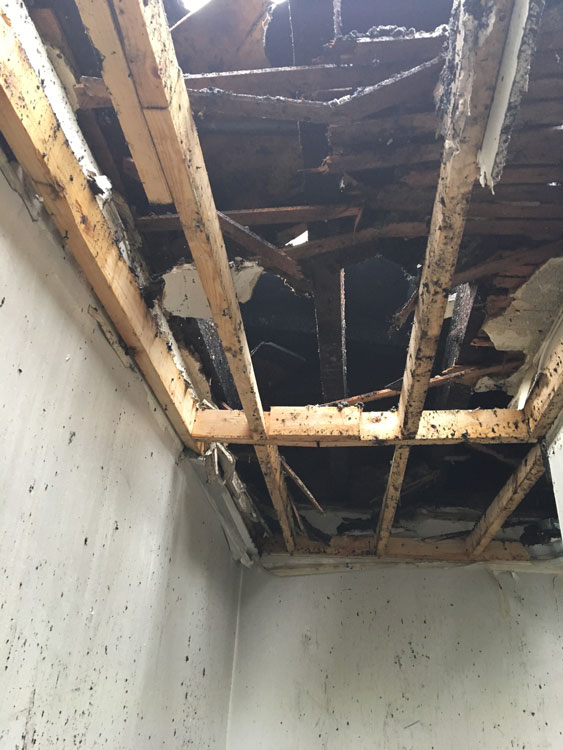 When I was a lieutenant covering in a ladder company, we received an odor of smoke in an apartment on the top floor of a six-story multiple dwelling. We entered the apartment and the occupant informed me that he was smelling a burning odor all night. We started searching for the source to no avail. It was frustrating, I knew that there was something burning but just couldn’t find it. The odor was strongest in the boy’s bedroom. I tried turning off the lights in the apartment and shone my light up to ceiling. I did see the smoke particulates in the light stream. I took a second to collect my thoughts. I looked at the whole scene. They had young kids I thought to myself: “What kind of mischief would a seven-year-old boy be up to?” I know what I did at that age–lots of dumb things.

I looked around the room and that’s when it struck me. I saw that the room had a light fixture with a sort of bowl on the bottom. I knew if that was my room, I would be using that light fixture as a basketball hoop. I ordered my can firefighter to get a step stool and check the fixture. Sure enough, there was a small plastic ball sitting against the bare light bulb. When the light was on, the bulb would cause the plastic to heat up and cause the odor.  Kids…what can you do?

I am very patient when it comes to odors of smoke. I know from my experience that any odor of smoke is for a reason, ore so now than ever before. At a recent alarm for a reported smoke in a six-story multiple dwelling, we received a few calls for an odor throughout the building. We all know that there are all different types of odors. More often than not it may be a person cooking who left a pot on the stove. This results in a unique odor all on its own, especially when an aluminum pot is involved. Rubbish fires have a distinct odor as well and can be pretty quickly detected. There is one odor that stands out, and that is a structural fire.

I was patiently waiting outside the building in my command vehicle while the first-due ladder went in to search for the source of the smoke. Since they were having no luck, I asked the second-due ladder to go and give them a hand. Still no luck. I decided to take a walk into the lobby of the building to see what was happening. I met an occupant who asked why we were there. I told him that we were trying to track down an odor of smoke in the building. He happened to mention that he thought the building was going to hell; there were always problems. He said that his lights in his apartment were flickering all day and he thought the buildings electrical service was in bad shape.

I asked him if he minded if I took a look in his apartment. I went into the bedroom. There were electrical power strips all over the place. He had a big screen TV and there was even one power strip plugged into another. I walked over and placed my hand on the wall where I thought the BX may be running, and sure enough the wall was hot. I called the ladder to come down to the first floor. I explained to the lieutenant what I thought was happening. He ordered his can firefighter to open the wall, sure enough, fire was running up the wall into the ceiling space (photo 4). 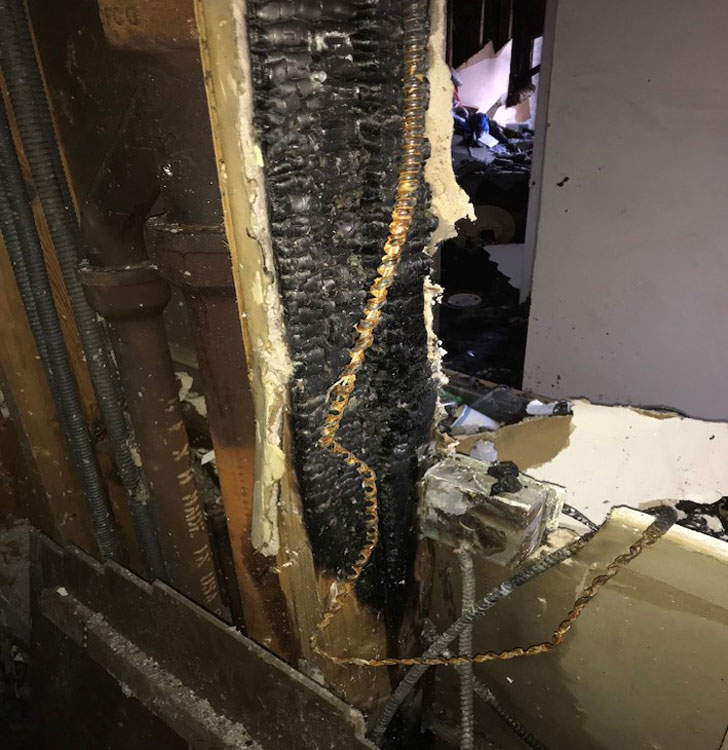 Locating the fire is the most important step in fighting a fire. We need to first locate the fire to define the problem. No hoselines should be committed until the exact location of the fire is determined. If firefighters make assumptions and begin committing to a location, this may come back to bite them. One of the biggest issues in locating the fire are in one-story commercial buildings. What generally happens is that ladder companies enter a store and encounter high heat and heavy smoke and assume that the fire is there.

When I was a firefighter, we had a fire in a store in a five-story, non-fireproof multiple dwelling. We were third-due engine, and the chief ordered us to back up the first engine. The second line was urgently needed somewhere else. We were bogged down in the store. The heat was excruciating, with heavy, blinding smoke. It felt like we were just standing still taking a beating and making no progress. Something was not right. There was no visible fire. The captain ordered us to go outside and conserve our air. We were using our tanks for no reason. When we were outside I mentioned to my buddy that I knew the building and that there was an entrance to the basement right inside the vestibule. We made our way to the basement, and sure enough, the whole basement was cranking.

The telltale signs of a basement fire are exactly what we were experiencing. It’s textbook. If you have high heat and heavy smoke with no visible fire, then the fire is below you. Another sign is that if you are operating a 2½-inch hoseline and don’t see any improvement, you are not hitting the fire. The ladder company–or if your department doesn’t have a dedicated ladder, then a search team–should locate the fire and communicate the exact location of the fire to the engine company. This communication is critical. The ladder company officer and engine officer need to verify that they understand each other and that they are talking about the same thing, or tragedy may result.

At one fire, a ladder company officer informed the engine officer that the fire was to the “left,” not realizing that he was facing the engine officer. The engine officer assumed he meant his left. They proceeded to advance down the hallway, going in the wrong direction. The fire wrapped around the hallway and cut off their egress. If one of the officers hadn’t picked up on the error and turned them around, they could have been seriously injured.

In high-rise office buildings, the standard operating procedure is that the engine company remain in the lobby until the ladder company locates the fire. This is because in large high-rise buildings, numerous people will be calling from many different floors. It is very easy to get distracted and wind up on the wrong floor. After locating the fire, they also need to determine the attack stair.[2]  When dealing with calls for a fire in high-rise buildings it may be a good idea to wait until you get all the calls and start with the lowest floor. If one of the calls states that there is fire, you can narrow down the search to that particular floor. In high-rise multiple dwellings, the calls can be for anything from rubbish in the hallway to a full out apartment fire. 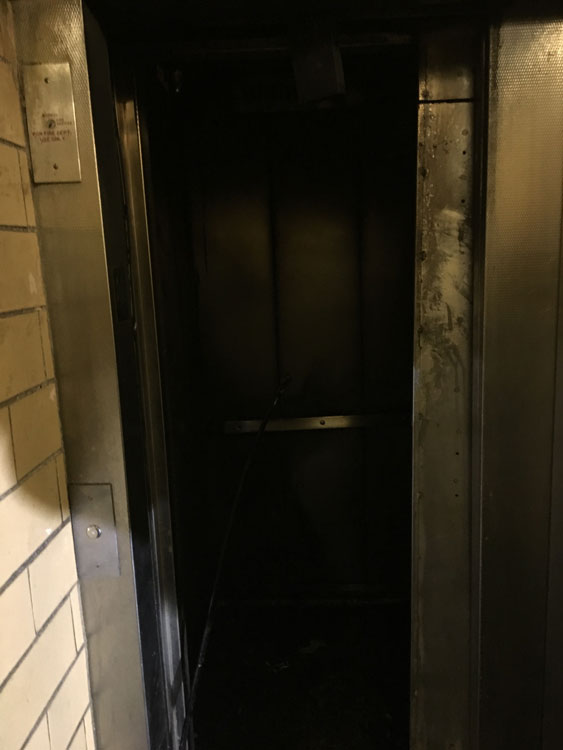 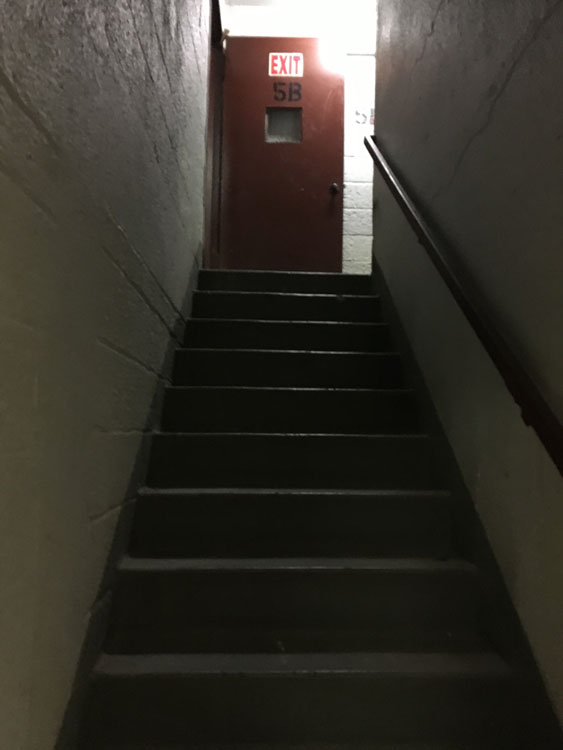 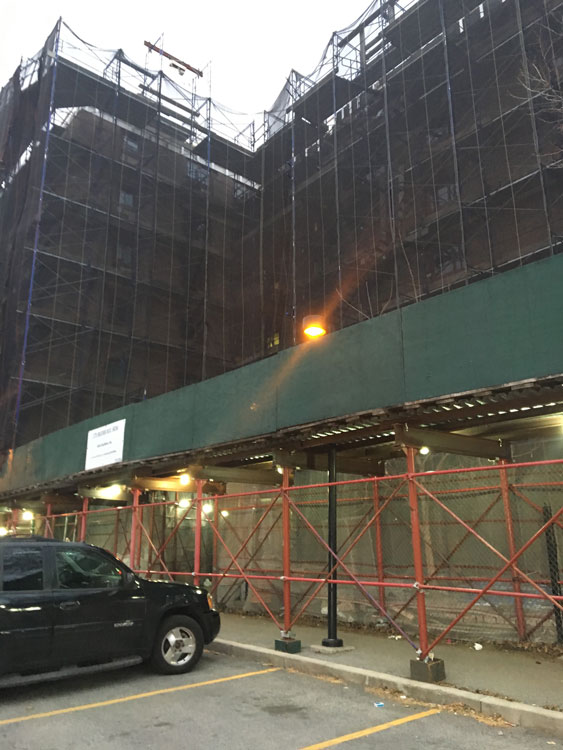 Recently we received a call for a fire in the elevator around 0500 hours in a seven-story fireproof multiple dwelling. These buildings have one elevator in the core of the building (photo 5) with two fireproof-enclosed stairways (photo 6). The calls were coming in from multiple apartments, all from the upper floors. The building is under renovation and is wrapped in scaffolding and fencing on all floors (photo 7). Upon arrival, there was nothing visible from the street. The first-due ladder headed up to the upper floors in search of the fire. It was obvious by the muffled radio transmissions that they were in the midst of a heavy smoke condition.

The smoke was dark black and oily, like a hydrocarbon fire, making it difficult to find the location of the fire. To complicate matters even more, an occupant ran out of his fifth-floor apartment, leaving the door open and stating that his apartment was on fire. The engine officer called for a hoseline to be stretched to the lobby, but somehow in the confusion the firefighters thought that the line was needed on the fifth floor. The burning elevator had originally been on the upper floors, but it somehow returned to the lobby. When the second-due ladder came into the lobby and saw the burning elevator, they forced the door and the fire rolled out over their heads. 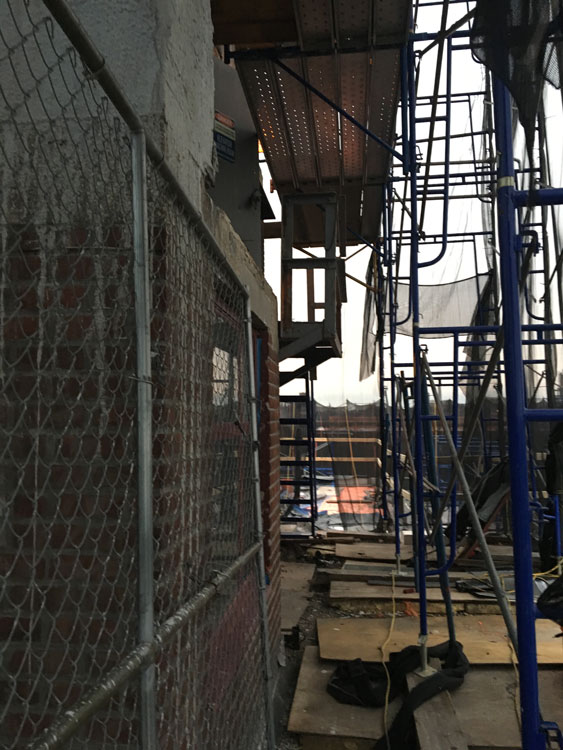 This line was urgently needed in the lobby but it was on the fifth floor; thankfully it wasn’t charged at this point. A second hoseline from the pumper was not an option because the street was too far away. The line needed to be brought down to the lobby. Members brought it down pretty quickly and extinguished the fire. Because the roof was all fenced off, there was difficulty in accessing the elevator machinery room (photo 8). Even though the both bulkheads were vented, there was an extremely heavy smoke condition. The shaft over the elevator needed to be vented. This is a perfect example of why occupants need to shelter in place. The hallways were loaded with extremely toxic black smoke (photo 9). 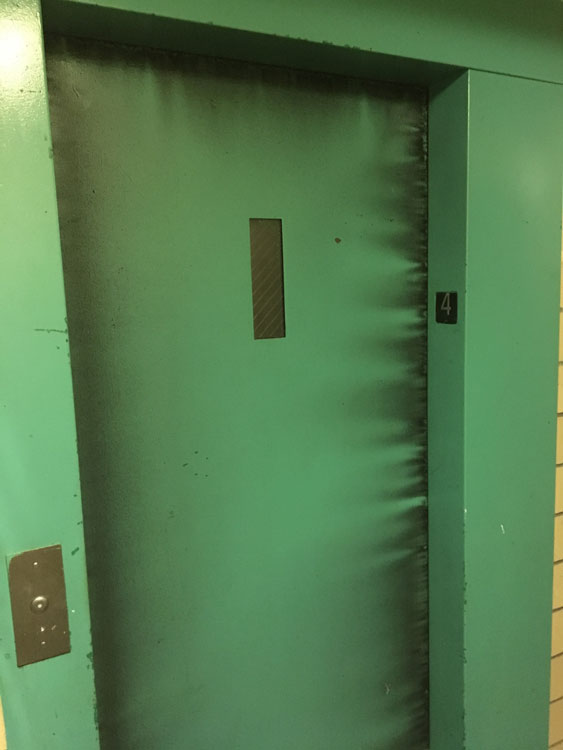 Take a minute to do a proper size-up and don’t be too anxious to commit to an area if you don’t know the exact location of the fire.

[1] Cockloft refers to the space in between the top floor and the roof. It’s usually loaded with dried out wood. In some buildings, a cockloft can be up to 3,000 square feet.

[2] Attack stair. The stairwell that will be used to stretch the first hoseline. All other stairwells will become evacuation stairs. All hoselines will come out of this one stairwell.

Daniel P. Sheridan is a 33-year veteran of and a battalion chief with the Fire Department of New York assigned to Battalion 3. He is a national instructor II and a member of the FDNY IMT. Sheridan is also a lead instructor with Mutual Aid Training Group.