THE Commercial Advertiser,of New York city, comments upon the destruction of property by fire in the following article. Our contemporary’s remarks are quite pertinent to the existing situation and are well worthy consideration.

Losses by fire in the United States and Canada in 1900 aggregate the enormous total of $103,362,250, over $26,500,000 more than in any previous year since the Boston confiagration. The Ottawa-Hull disaster involved a loss of $12,000,000, and the Hoboken wharf and steamship fire a loss of $5,350,000. In other respects the list is normal, and shows an increase over previous normal years of over $9,000,000. These are the underwriters’ statistics, and they are less likely to be over than under estimated. It is an enormous loss of accumulated wealth, a fearful penalty to pay for official and individual negligence. Its worst features are not, moreover, apparent upon first view. This loss of $163,362,250, comes upon a loss of $136,778,200 in 1899, and of $119,650,500 in 1898. It would appear from this that losses by fire are increasing in despite of the continued extension of systems of fire-fighting and prevention. The loss last year amounted to five per cent, upon $3,267,245,000. It is furthermore a permanent and irrecoverable loss. It falls in the first instance, of course, upon the insurance companies, and these have been very hard hit. It is said that some of them are saved from liquidation only by the advance in market value of the securities in which their capital investments are made. But the fire insurance companies are after all only a species of clearinghouses through which the insurance business of the country is transacted. They have to be recouped of all their losses. So that ultimately these enormous annual dest ructions of accumulated wealth fall as a tax upon the insurable property of the nation in fairly equitable proportion. Thus is the prevention of fire question brought right home to every property-owner. A first effect of the rule is the announcement of the underwriters that rates will be advanced in many sections. They must be, of course, if our fire insurance system is not to fall to the ground. The companies made no money last year, nor the year before. Capital invested in insurance is hazardously employed, and,therefore,requires large compensation. For every dollar of actual loss the insured of the nation are required to pay $2 or more, lhus the direct loss of $163,362,250 last year to the insurance companies becomes a loss to the great body of the insured of over $325,000,000. That amounts to a five per cent, tax on a capital of $6,500,000,000, and a two per cent, tax on $16,250,000,000. The normal expenses of the National government are not so large. What to be done about it is a question in the consideration of which the underwriters should take a leading part. But it is not asking too much for the layman to consider if it is not time that fireproof construction should be much more extensively required by legislation. 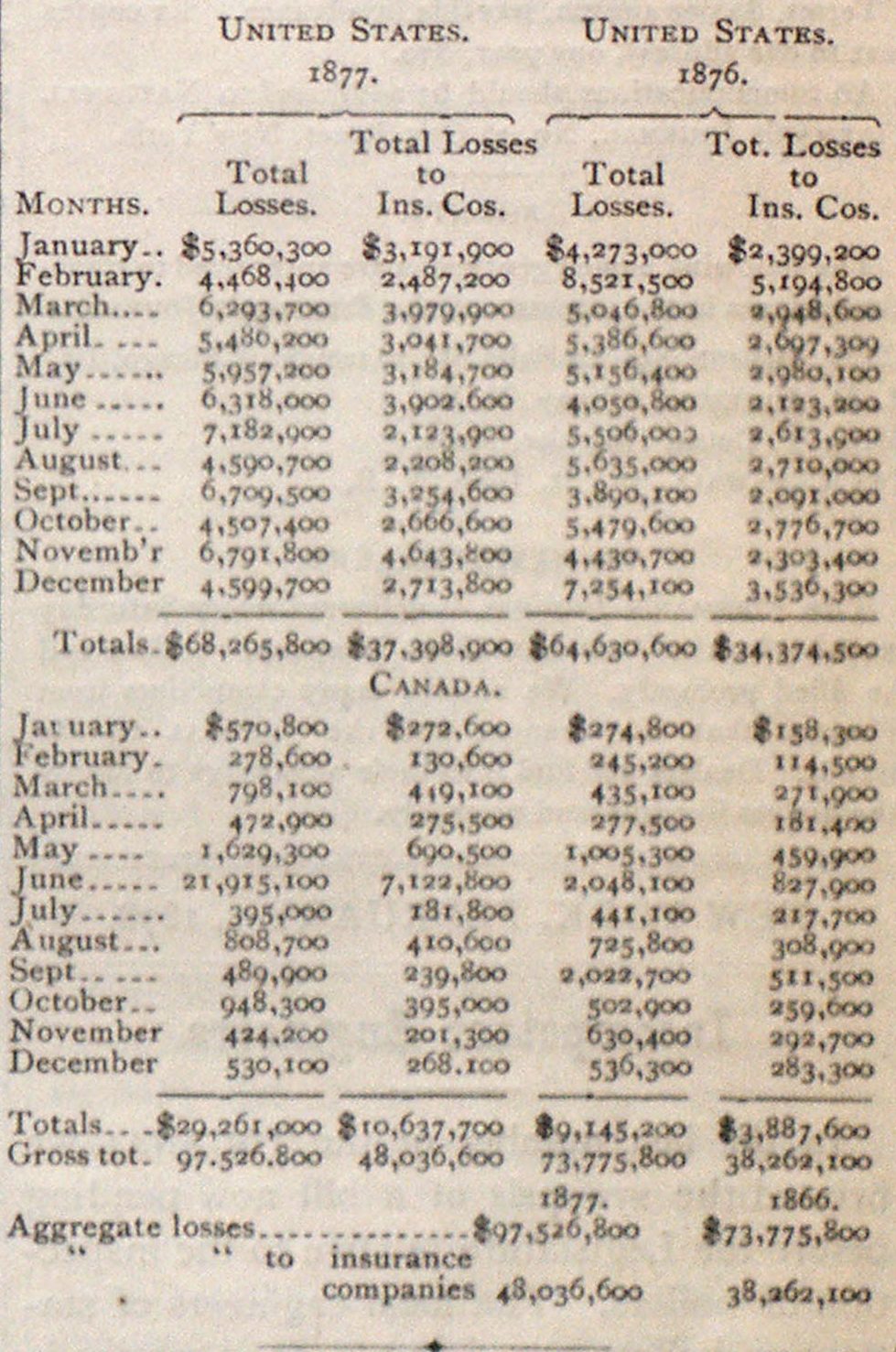 The following statement of losses by fire in the United States and Canada during the years 1876 and 1877, we extract from the tables compiled by the Insurance Chronicle.