The January meeting of the State Association of Fire Chiefs of Maine was held on Tuesday January 18th. with more than sixty chiefs and guestin attendance, at the Central Station of the Augusta Fire Department. Mayor Levi T. Williams of Augusta made the address of welcome to the Maine Chiefs which was responded to by Chief Michele H. Falconi of the Hallowell Fire Department.

One of the important matters of business of the meeting was the vote to continue the standardized training program which had been promulgated by the State Office of Civilian Defense and now under the direction of the Maine Instructors Association. Col. F. H. Farnum, State OCD Director, one of the speakers at the morning session stated in his talk that firemen’s training as established under the OCD will be continued on the OCD program, and praised the Maine departments for the work that had been done. He further stated that the fire fighters, police and medical staffs were the backbone of the CD protective service, and advocated training on an increased scale, for the benefit of the different localities in the state, as an indefinite program and not only for the duration of the war.

Charles E. Fortin, chairman of the Unemployment Compensation Commission, and a former fire chief of the City of Lewiston, another speaker on the program, devoted his remarks to state legislation that would provide a Fire Marshal for the State. This would give the fire departments and their officials a unified authority to which they could turn in their problems, and is a matter that the Maine Association has worked on for a number of years, concerning which there is now a bill in recess of 1943 legislature.

Lt. James Cowan of the Bangor department and President of the Maine Instructors Association, who had recently returned from the Sixteenth Annual Fire Instructors Conference at Memphis, Tenn., stated that Maine was rated third in the list of states in the number of men that had been given training during the past year. He also spoke of the coming innovations in fire fighting practice in the use of high pressure fog or water vapor which will supplement the former heavy streams of water. He also indicated that the post war training would include special studies in airplane crashes, and that the army Jeep would undoubtedly figure in grass and forest fires in the post war program.

Secretary of State Harold I. Goss, who was speaker at the luncheon session of the association at the Augusta House, complimented the State fire departments, declairing that Maine is well equipped to take care of lives and property by an efficient personnel, and advocated continued training, as too much could not be known of the cause of fire and of fire equipment.

One of the pleasing features of the meeting, was the making of Ralph Webber of Augusta an honorary member of the association “for conspicuous servicerendered” the association in his position, in charge of the training program by the State Office of Civilian Defense. His membership was proposed by Chief Curtis Allen of the Sanford department. 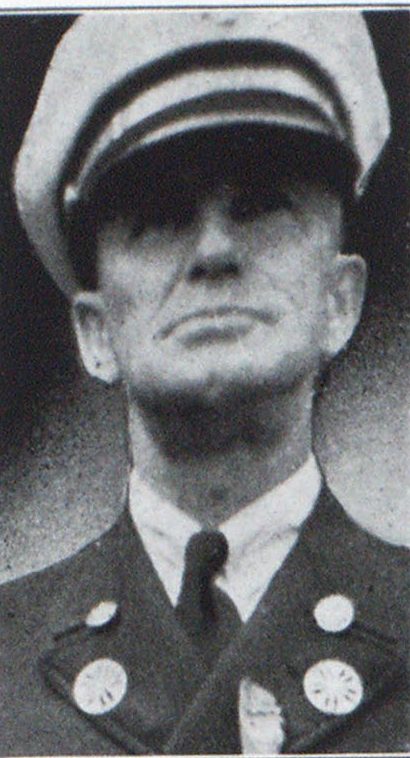 Cloudy weather and rain in some sections of the State did not prevent a large number of members, ladies and guests of the State Association of Fire Chiefs of Maine, from attending the quarterly meeting of the association at Rockland. July 8th. The address of welcome was extended the association by Mayor E. R. Veazie, of Rockland, which was responded to by vice-president Chief Soloman A. Herman, of the S. D. Warren Company, Westbrook. Owing to the fact that the principal speaker would not arrive until afternoon, the president introduced to the members Mr. Arthur Myers, of New York, sales manager of the Atlas Equipment Company, who explained the Atlas Fire Net, which he had on exhibition, and which was demonstrated with a one hundred pound dummy after the close of the afternoon session. The president then introduced Mr. Don Blanchard, of the Blanchard Associates, who spoke briefly of the Davy Fire Escape, which was also demonstrated at the meeting.

Chief William H. Clifford, of Cape Elizabeth, Assistant Administrator of the Fire Defense program, was called upon to explain what had been done with this program, and at the close of his remarks he called upon various county administrators to explain what had been done in their sections of the state. Those reporting were: Chief Victor Huart, of Farmington, Franklin County; Chief Soloman Mercier, of Rumford, Oxford County; Chief George McCurdy, of Augusta, Kennebec County; Chief Z. F. Drouni, of Lewiston, Androscoggin County; Chief E. J. Hutchinson, of Boothbay Harbor, Lincoln County; Chief Allen F. Pay son, of Camden, Knox County; Chief Constantine, of Bangor, Penobscot County; Chief Eugene Ricker, of Saco, York County. This discussion was further entered into by Chief Van E. Russell, of Rockland; Chief Solomon Herman; Chief Ed. Reny, of Westbrook; Chief Giles Frost, of Norway; Chief Dennison, of Harrison; Ex-Chief Walter W. Berry, of Waterville; Ex-Chief Scott Morse, of Bath, and the president, Chief Stanley G. Turner, of Springvale. The summary of the various reports showed that the fire departments have been very active in forming auxiliary groups in all sections of the state, and planning running schedules for emergency of any nature, of enlisting the boy scout organizations and American Legion groups. It seemed to be the opinion of the various chiefs that the various auxiliary groups should confine their activities to one organization, that is, they should be members of but one group, either fire, signal, or radio, etc.

It was the opinion of all chiefs that the greatest problem was the education of the public to the fact that “it may happen here.” The meeting adjourned at noon, to partake of a clam bake that had been prepared for them by the members of the Rockland department, at Cresent Beach, about three miles outside of Rockland, by the sea shore; the rather inclement weather prevented holding the clam bake in the open. Governor Sumner Sewall, accompanied by Pearce J. Francis, Insurance Commissioner of Maine, and Raymond Adams, State Coordinator of the Civil Defense, arrived at Cresent Beach before the luncheon was served. When the luncheon was finished, the members listened to addresses by the Governor and his associates, who all talked along the line of State Defense work.

The members then adjourned to the Community Building at Rockland, where they had the privilege of witnessing a demonstration of various kinds of incendiary bombs by Mr. G. G. Kemp, Instructor of Chemistry in the Arlington High School, Arlington. Mass. Prof. Kemp’s demonstration of bombs held the close attention of the audience, and ended with a demonstration of electron bombs.

Thomas Cocroft, of Scarboro, extended an invitation to the members of the association to attend a meeting at the Scarboro Town Hall on September 18th, when a proposition to organize a state-wide Firemen’s Association will ho discussed.

AMONG THE FIRE ENGINEERS