The Massachusetts State Firemen’s Association held its 22d annual convention at Lawrence on October 18, 10 and 20. President George L. Johnson, chief of the Waltham department, presided, Addresses of welcome were made by Mayor John T. Cahill and Dennis E. Carney, chief of the Lawrence fire department. Several responses were made, followed by introductory re marks by President Johnson. After hearing reports from the various committees. Hon. F. P. Bennett. Jr., of Saugus, addressed the convention on the “Massachusetts State Firemen’s Assn ciation and Its Influence for Good from a Legislator’s Standpoint.” The remainder of the first day’s program included addresses by Hon. Rob’t E. Burke, mayor, Newburyport, and by Mrs. Mary A. Lathan, Cambridge.

Reading of roll of honor.

Address. “Bills Introduced in the Legislature of 1911, and Laws Affecting Firemen,” by Capt. Jas. F. McKissock, Ladder Company No. 4. Lowell.

Address, “What Progress Has Been Made to Date in the Development of Motor-Drawn and Driven Pumps, to take the place of the Steam Fire Engine?”

“What Progress Has Been Made to Date in the Development of Motor-Propelled Ladder Trucks,” by W. H. Daggett, chief engineer fire department, Springfield.

Address, “A Permanent Fireman’s Idea of the Rules and Regulations Governing the Permanent Force of Fire Departments,” Joseph A. Sanders, Engine Company No. 4, Somerville. Several selections were rendered by the Hancock Male Quartet.

The program was continued on the second clay as follows:

Address, “Opinions of What Advantages will Accrue from the Adoption of the new rule Requiring Competitive Examinations for official Positions in the Boston Eire Department, and the Holding of Conference Meetings with the Heads of Departments and Citizens Generally in the Cities and Towns of Massachusetts, as Recently Adopted by the Board of Civil Service Commissioners,” Elmer L. Curtis, member of the board of civil service commissioners, Boston, M ass.

Address, “Will the use of Gasoline as a Motive Power on Fire Apparatus Compel the Installation of Electricity for Lighting and Heating Purposes in Fire Stations, and Reasons Therefore, Capt. William Brophy, Boston, Mass.

Address, “What Aid are Permissive Acts to the Suppression of Forest and Brush Fires, and Should not Mandatory Laws be Enacted,” by F. W. Rane, state forester, Boston. Mass.

Address, “Danger to Firemen at Fires from the Fumes of Ammonia, and Methods of Treatment to Firemen so Injured,” by W. F. Daley, deputy chief, fire department, Brockton, Mass.

On the last day were heard report of credential committee.

Address, “Description of, and Progress to Date of Committee on Establishing a Metropolitan Fire District, for the Purpose of Forming a System of Notification of Fire Alarms among the Cities of Massachusetts,” John A. Mullen, chief engineer, fire department, Boston, Mass.

Address, “A Comparison of the Firemen and Fire Departments of To-day and Those of 20 Years Ago,” John R. Murphy, Esq., Boston, Mass. 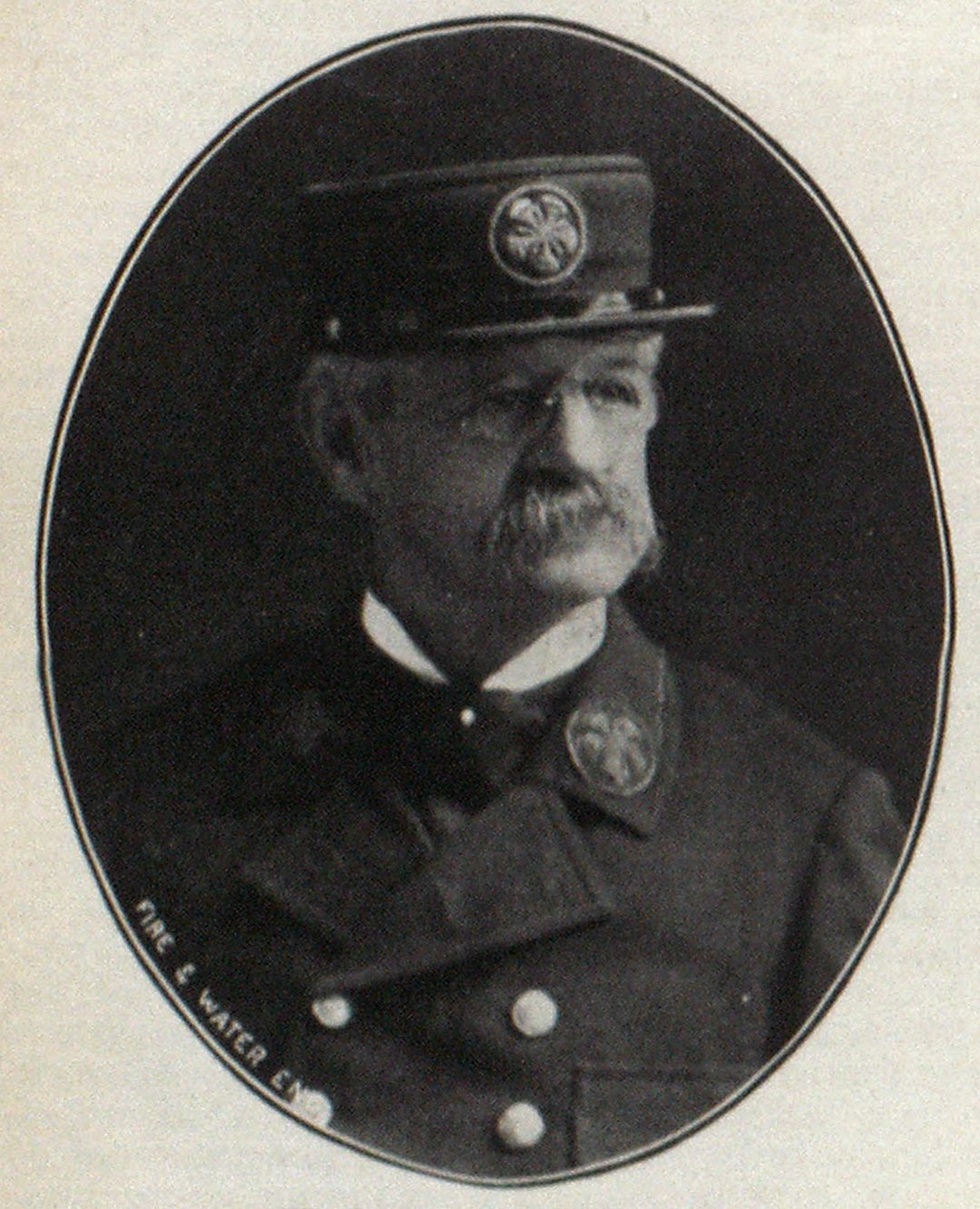 The annual convention of the Massachusetts State Firemen’s association took place on September 11, 12, 13, at Fall River. The meetings were held in the Music hall, with President George F. Coleman, of Worcester, in the chair. Mayor Coughlin made the address of welcome. Chief Davol also welcomed the delegates on behalf of the local Fire department. An eloquent reply came from Chief J. R. Hopkins, of Somerville, in the course of which he eulogised Chief William C. Davol, its executive head. Captain James McKissock, of Lowell, also responded and thanked the city for its welcome. The roll of honor (the list of the dead) was then read, all present standing, after which the president nominated the committees and delivered his opening address. The convention then adjourned till the evening.

At the evening Chief K. S Hosmer, Lowell, read the report of the Firemen’s $15,000 Relief fund, from which it appeared that, while it had been found impossible to pay all the debt of it had been reduced one half, with every prospect of its being wiped out this year. During the past twelve months 238 claims were pre settled and 223 were allowed, the rest being held for further investigation. Two members urged stronger support of the fund through greater enrollment, so as to aid in obtaining legislation, and through individual, rather than company membership. 1 he latter one member would abolish altogether, while others opposed all distinct i«»n between call and permanent men in the rates paid for membership and in the payments to those disabled. The call men, if injured, lost their pay from their regular employers, while the permanent men received their full pay and various benefits, besides. A discussion ensued as to the comparative value of the permanent and the call men I he report was finally adopted.

1 lie report of the legislative committee. Captain Win Brophy. of Boston, chairman, while it asked for the confidence of the committee and for all matters concerning legislation to he referred to it. was purely negative in character. It was accepted.

Some minor matters were then disposed of. after which the Rev George S. Shaw Ashby, read a paper on “Should not the State compel every town to have a fire department?” He believed that it should, just as much as it makes public schools compulsory. A discussion followed. Captain Greeley S. Curtis, New York, feared that, if made compulsory, the departments established might be the poorest that would comply with the law. The convention went on record as favoring compulsory fire departments in towns.

James W. Jentzen, engineer of engine No. 1. Lowell, read a technical paper on “The advisability of using feed-water heaters in connection with the steam fire engines.” Two years’ practical use of such a heater by the speaker had developed no weakness, and had shown it to have defined value. It consists of a coil of copper, weighing about 150 lbs., and, in no way, disturbs the centre of gravity. It is a valuable adjunct to any engine, and in tests gives a pressure of 71 lbs. as against 59 in machines not equiped with it. A discussion followed.

K. M. Byitigton, supervisor of engines of the Boston fire department, who was expected to present a paper on “Should not the portable pump of steam fire engines be constructed and rated to correspond with the stationary pump?” had prepared no paper, and in his absence Captain Greeley S. Curtis spoke on that subject. He favored rating in three sizes of 600, 800 and 1,000 gals, a minute; rather than in four, and in rating by what the engines can easily exceed; what they can do in natural fire conditions. Engines of less than 600-gal. capacity might profitably be done away with.

A good paper by Daniel J. O’Brien, drillmaster of the Boston department, on “Advantages of drill towers and working of same,” was then read.

Chief Edward F. Dahill, New Bedford, spoke on “What is the advantage, if any, in the use of smoke-masks at fires?” Several forms of smoke masks were described, and none in particular recommended. In the discussion which followed it appeared that not many had found the smoke-mask of very much value. Some, however, thought there was use for such masks in subbasements.

In the afternoon George G. Tidsburv. Ashland, read a paper by Captain Wm. Brophy, on “The dangers from electric wires in fighting fires, particularly in buildings.”

A paper on “The advisability of telephones in fire-alarm boxes” was read by Captain Richard Donahue, chief operator of the fire-alarm department in Boston. The reader advocated such a use and was upheld by A. Howard Fiske, Framingham, and Captain Greeley L. Curtis. Chief Mullen, Boston, and Chief Horton, Baltimore, advocated the use of the telephone as an adjunct to and auxiliary of the fire-alarm service. Chief Horton’s opinion was that the portable telephone came next to the Gamewell system in point of effectiveness, and was extremely useful in giving details of a tire, but was opposed to giving alarms by its means and would not place the responsibility on the telegraph office because of a telephone alarm. He believed in every possible method to protect the telegraph operators in the fire department.

Captain Burton Steere, Springfield, in a wellwritten paper insisted that all paid departments should maintain relief associations, and gave his idea—a sound one—as to the proper form of such a relief association.

At the conclusion Chief Johnson. Waltham, and Chief Arnold, Salem, escorted Chief Davol to the chair. The chief expressed his gratitude to the convention in a few felicitous remarks.

The convention then adjourned sine die.

At Toledo, Ohio, on August 25, a fire which started in the upper stories of the Moreton Truck and Storage building at 232-234 Huron street, caused a loss to-night estimated at $200,000. The building was occupied by the International Harvester company. The Toledo club and the newspaper offices of the News-Bee and the Times in an adjoining building were filled with smoke and threatened with destruction. A wall of the burning building collapsed and for a time it was feared that several firemen had been caught under it.