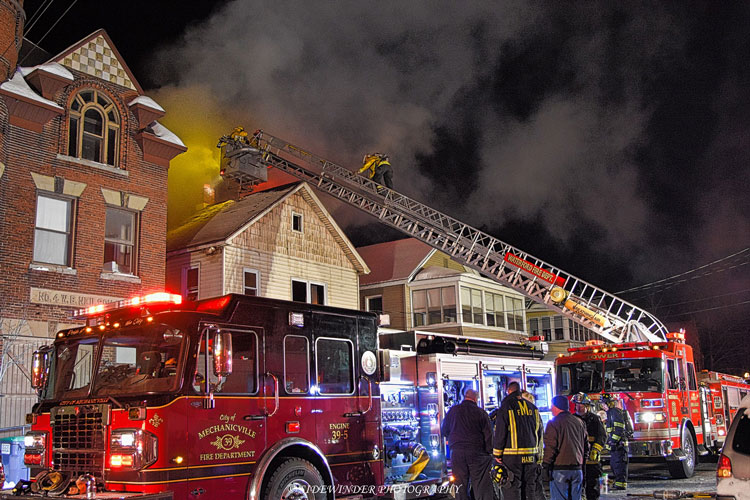 The City of Mechanicville (NY) fire department was dispatched for this recent structure fire at 36 Saratoga Avenue around 12:15 a.m. The first-arriving chiefs on scene called immediately called for the second alarm with fire showing on the second floor and starting to extend into the exposure structure. Command requested EMS to the scene priority one for a resident that had injuries from the fire and three additional ambulances to the scene.

Before the first-arriving engine was on scene, the Mechanicville Police Department had escorted neighbors from their homes that were threatened by the fire. Command had a working fire on the second floor of a large, two-story balloon frame structure with extension into the attic.

Engine 39-5 was the first engine on scene and stretched a handline to the second floor and aggressively went to work knocking down the fire. The second alarm brought Arvin Hart, Waterford, Round Lake for rapid intervention, Stillwater, Hemstreet Park, Clifton Park for a second firefighter assist and search team (FAST), and Hillcrest fire departments to the scene. Engine 39-5 was able to establish a water supply in front of the structure quickly.

Freezing temperatures and the snow-covered streets and sidewalks made it challenging for firefighters to operate on scene. Waterford’s Tower 1 arrived on scene and was immediately put into operation to vent the roof. Crews inside the home had extensive overhaul and command redesignated Round Lake o go to work inside with firefighters from Hillcrest and Clifton Park took over as the active FAST.

Firefighters had heavy overhaul because of multiple layers in the ceiling which prevented firefighters from gaining easy access to the attic area to hit hotspots. The fire was placed under control quickly and only one resident was taken to the hospital for minor injuries. The Saratoga County cause and origin team are currently investigating the cause of the fire.

Home Across the Street from Delanson (NY) Fire Station Explodes