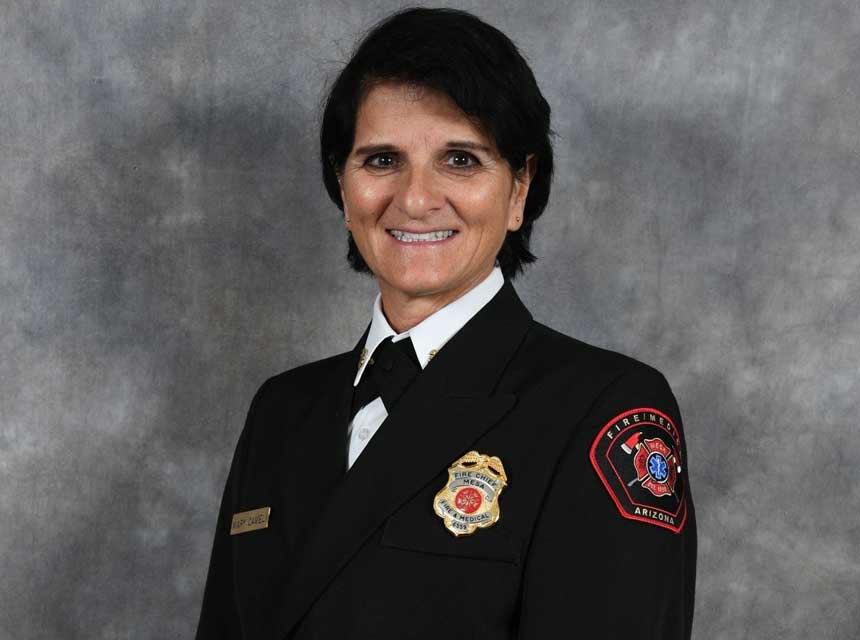 Apr. 12—Raised in Chicago, Mary Cameli, then named Mary Damiani, came to Mesa in 1982 wanting two things: to get away from brutal winters and to be a teacher.

One out of two wasn’t bad, she’ll tell you …

The college graduate landed here in early September, figuring schools in Mesa start as they do in most of the country — after Labor Day.

Negative: “I was too late. They start school here in August, and everyone had their hiring done by the time I got here,” she said with a laugh.

Her brother, Gil Damiani, worked for the Mesa Fire and Medical Department. He told his sister they were hiring.

“He said, ‘You have to be physically fit, but it’s a job where you really help the community.’ I thought about it, since I was active in high school and college playing sports, the fact you help people — that was a good fit,” she reflected.

So began a series of “firsts” for Mary Damiani Cameli, who married Mike Cameli of the Tempe Fire Department in 1988.

After becoming one of the first two women hired by the Mesa Fire Department in 1983, she still moved up the ranks, becoming “first woman” in various positions of leadership — engineer, captain, battalion chief, assistant chief — before becoming the city’s first female fire chief in 2016.

Now, her trailblazing is expanding far beyond city limits.

On March 15, the Metropolitan Fire Chiefs Association for the first time in its 56-year history gave a woman its top honor.

“Mary Cameli, chief of the Mesa Fire and Medical Department in Arizona has earned the Metropolitan Fire Chief of the Year honor,” stated the association.

“I’m very humbled by the award,” said Cameli, somewhat blushing during a Zoom interview with the Tribune.

Characteristically, she deflected the attention.

“What I’m appreciative for is the men and women I get to work with,” she said. “They are the ones who deserve (the award). They do a great job of serving the community. They deserve the recognition.

“All of them had a tremendous impact on really teaching me things along the way,” said Cameli.

Does she hope winning the award will inspire other females to consider a firefighting career?

“One hundred percent,” Cameli shot back. “If anything, I want young women and young girls to know there’s no restrictions and limits on what they can do. We do an Aspire Academy every year for young women. When I was growing up, I didn’t know (being a firefighter) was an option.

“Now, nothing’s off the table. If I can inspire some young women, I’m very grateful for that.”

The association noted many things that make Cameli worthy of its top award.

“Cameli has earned accolades locally, throughout Arizona and on a national level for spearheading the MFMD program which is regarded as a ‘Gold Standard’ example of Integrated Community Health Care. MFMD service delivery elements, and the research and data generated as part of a significant federal Health and Human Services grant, have been shared widely throughout the fire service and medical community to impart important lessons learned,” it said.

Cameli is a past president of the Arizona Fire Chiefs Association and currently is vice chair of the International Fire Service Training Association Executive Board. She is vice president of the Center for Public Safety Excellence Board and co-chairs the IAFC Women Chiefs Council.

Councilwoman Jen Duff said she is thrilled by the national recognition for Cameli, calling her “a great inspiration” she has “known her for years.”

Duff, a Mesa native, said she loves how active Cameli is with the community.

“She’s a mentor. An icon for so many of us for her commitment to excellence … She’s spectacular. I love having her as a model for girls and women in Mesa — and now the whole country.”

‘Are you a secretary?’

For decades, fire departments had a reputation as “boys clubs” around the country and women often had a hard time gaining acceptance as firefighters.

Even now, fire departments around the country face suits over treatment of women.

According to a recent ABC News story, “Advocates say going to court is sometimes the only effective recourse in a field where women make up such a tiny part of the workforce.”

That was not the case in Mesa, according to one who was there at the starting line for women.

Not that everything was set up perfectly.

“Only one station has separate bathrooms. All the stations weren’t designed for women: one dorm, one bathroom, no locks.

“The things we had to deal with then were the right gear to fit women. The gloves were too big, the boots were too wide … even the uniform, we had to get them tailored,” she recalled.

And women firefighters were tough from the community to wrap their minds around, back in the early Eighties.

“When we’d go on calls, people would say to Gigi and I, ‘Oh are you the cook? Are you the secretary?’ It was new for the community to see,” Cameli said.

The living situation was no laughing matter, though.

“I know spouses were concerned because we were at stations 24 hours a day. I made it a point to get to know (co-workers’) spouses,” she said, adding that wives of firefighters felt better after getting to know her.

In 2021, “I think the department and the community is much more comfortable seeing females on the fire truck,” Cameli said.

Once she became a firefighter, Cameli soon forgot about being a teacher.

“The physical part, I always loved that,” she said.

She has always enjoyed interacting with the community, which became both a challenge and an increasing necessity during the pandemic.

“We’ve been very active in the community from the get go,” Cameli said.”We started with the COVID testing, we went into the community to do that. And now we’re giving the vaccine.”

The Mesa Fire and Medical Department was a key player in the COVID-19 vaccine rollout, giving shots to teachers and other essential workers for weeks at the Mesa Convention Center parking lot. And, though they are not giving shots at the new state site, firefighter/paramedics are on hand for support at the Dexcom indoor vaccine drive-thru.

This time last year, Cameli called meetings to talk about the frightening acceleration of the virus spread, with more and more calls of possible cases having severe breathing problems and other life-threatening conditions.

“We watched it daily. We saw the increase, we knew it was happening,” Cameli reflected.

A great concern was keeping her responders safe.

“At one point we said, ‘Assume every patient you meet is COVID positive.’ You’d go out on a call and then find out they were COVID positive,” she noted.

Ultimately, about a quarter of Mesa’s firefighter/paramedics tested positive for the virus.

“Everybody’s back to work,” Cameli said. “We haven’t had any positives in the last couple weeks.”

She herself tested positive (“I never got sick”) when the coronavirus ripped through the Cameli home a few months ago.

After living in Glendale for years, the Camelis moved to Mesa four years ago. The Camelis have been married 33 years. “We met at a union convention in Yuma,” Mary Cameli said.

Their other adult daughters are Christina, Cara, Kaila and twins Kapri and Karli.

“I’ve been blessed with a wonderful family. They sacrificed a lot,” Mary Cameli said.

One of the 22 female firefighters in Mesa is Karli Cameli.

Her parents were part of the pinning ceremony that welcomed Karli to the Mesa Fire Department two years ago. “She’s loving it,” Mary Cameli said.

Being enthusiastic about your job seems to be a family trait.

Ada Damiani, 93 years old, is still working at D and D Foods, the family grocery store in Chicago Heights where she started working at 16.

“She goes to work every day with a smile on her face,” Cameli said. “My mom is an inspiration for how I want to be.”

“We’re proud of you, Mary,” Mayor John Giles said at Cameli’s budget presentation Thursday. He half-jokingly referred to her as “our celebrity fire chief.”

Reached at her Chicago store, Mary’s mother shared the sentiment.

“I’m so proud,” Ada Damiani said. Then again, she isn’t surprised by her daughter’s achievements: “She’s always been a caring person. We had 12 children so she used to babysit a lot. But she was always so upbeat … She’s always one to jump up and do things.”

The Damiani family, like the Mesa community, has grown accustomed to Mary Cameli’s line of work, though it was a bit of a shocker, back in 1983.

“My husband didn’t like that at first,” Ada Damiani said. “He figured it’s a man’s job. But he accepted it.”