The new fire station for Engine Company No. 21, of the Boston Fire Department, situated at the corner of Columbia Road and Annabel Street in the Dorchester district, was completed and placed in service late in February.

The apparatus consists of a 750-gallon American-LaFrance with a tiled roof. Mulhall and Holmes prepared the plans and Archdeacon and Sullivan were awarded the building contract.

The apparatus consists of a 750-gallon American-LaFrance motor pumping engine and a Seagrave combination chemical and hose car. The automobile of Chief Daniel F. Sennott will also be kept at this house.

The building is two stories in height with a tower at one end which extends a story and a half above the roof. The apparatus floor is spacious with two large double doors. On the second floor are the officers’ rooms, lockers, recreation and smoking room, and dormitory. 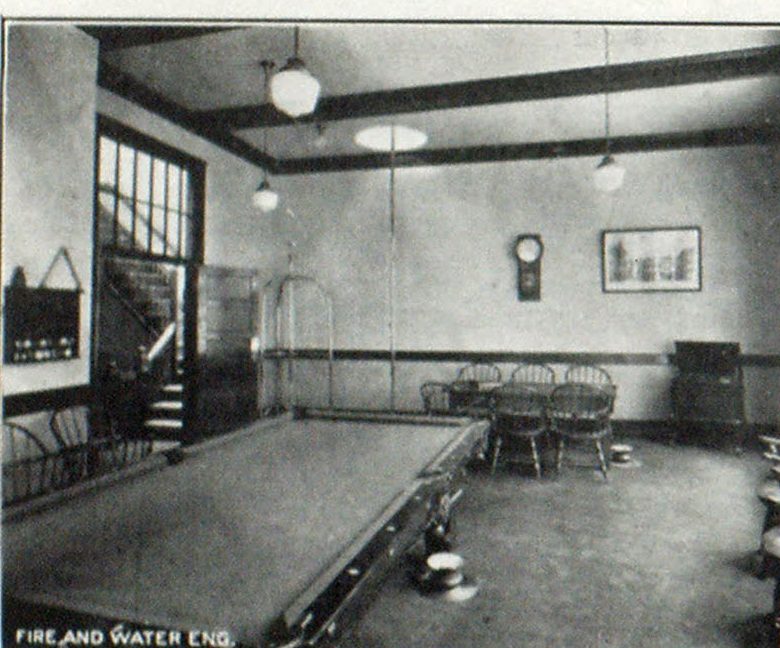 Home of Engine Company No. 7 Dedicated with Appropriate Ceremonies—Description cf the House—Interesting History of the Company

THE new fire station for Engine Company No. 7, East Street, Boston, Mass., which was recently dedicated, is one of the finest and most modern fire houses in New England. The location is on the site of the former fire station which was torn down a year ago and is close to the South Terminal Railroad Station and the Hotel Essex. It is within half a block of South Street, the famous leather centre of the shoe trade.

Plans for the building were drawn by James T. Ball, architect of the Boston fire department. The structure is of red brick and stone trim construction and is three stories in height. The main floor contains the apparatus and patrol desk; the second floor, captain’s and lieutenant’s rooms, lockers, library, and shower baths; and the third floor has a large living and recreation room on the front and spacious bunk room in the rear. A kitchenette has been provided and also a roof garden on top of the house where a radio receiving set is being installed. Space is provided in the cellar for drying of hose.

Eire Commissioner Theodore A. Glynn, Chief John O. Tabor, District Chief Albert J. Caulfield, Building Commissioner Wilson, Corporation Counsel E. Mark Sullivan, and Rev. Philip J. O’Donnell, of St. James’ Church, took part in the dedication exercises and the Ives band furnished music. Just before the ceremonies began the company responded to an alarm from Box 1493, corner of Congress and Purchase Streets, for a small fire on Purchase Street. A banquet an. entertainment was held in the evening and again the company was called away, this time by a still alarm for a blaze half a block away which was quickly extinguished.

Engine Company No. 7. which is located in the heart of the wholesale leather district, has a notable history and ranks as one of the oldest companies in the City of Boston.

The location of the engine in 1687 was in a shed on Green Street, now Court Street, near where later was built the prison. In 1743 it was moved to a shed near the Old South Church and in 1801 to a site on School Street in front of the present City Hall.

In the year 1809, the records show, the engine was moved to a place on a vacant lot while Court Street was being built and later a station was built in back of the old Latin school. In 1826 the company was furnished with a new engine built in New York and in 1827 it was again shifted, this time to the west of the County Court House. In 1847 a lot on Purchase Street was bought for Engine 7 and occupied by the company a year later. On December 16, 1858, the hand Engine Company No. 7 was disbanded to make way for a steam fire engine and on December 26 the steamer “Lawrence,” built by Bean & Scott, of Lawrence, Mass., was placed in service.

A new house was built for the company on the present site on East Street in 1869 at a cost of $24,000. Many interesting reminiscences are recorded in the old ledgers and company journals. Here are a few extracts picked out at random:

Engine 7 has seen service at large fires in Cambridge and in Marblehead. At the five-alarm fire on the South Boston waterfront some four years ago, when the International Waste Company’s plant, several stables and a boat yard were burned, the steam engine of No. 7 was caught under a heavy falling beam and badly damaged.

In all the big fires in the leather district the men of “Tiger 7” have rendered yeoman service as well as at the $1 COO,000 wool storehouse fire on Purchase Street two years ago.

When the company moved into its new quarters on June 7 it was equipped with a 1,000-gallon Anterican-LaFrance motor pumping engine and a combination chemical and hose wagon of the same make equipped with nozzle gun.

This new pumper, fresh from the shop, received a thorough testing out in actual service on July 18 when it pumped steadily for 14 hours, most of the time working three lines, at the four-alarm fire which caused a loss estimated at $150,000 to the Fairbanks Building on Congress Street in the high value district of South Boston.