A newly invented centrifugal pump is illustrated herewith, Fig. 1 being an elevation of the pump in a well, the column partly cut away to show the shaft. Fig. II is a vertical sectional view of the pump proper, the left hand half only being shown; Fig. III is a portion of Fig. II enlarged to better show the detail of the clearance seal and is taken along the line “A—A” in Fig. IV; Fig. IV is a partial plan view of the detail in Fig. III; and Fig. V is an enlarged sectional view similar to Fig. III and showing a differently constructed clearance seal.

In operation, the water to be pumped enters a suction piece or side plate 6, through a strainer 8 fastened to 6 by a flange 9 and bolts and nuts 10—11 and gasket 12. At the entrance to and forming a part of 6 are preferably two ^ or three webs 7 supporting a bearing hub 43 fitted with a cylindrical shell 3 containing preferably a rubber bushing 2 supporting the shaft 1 and lubricated by the liquid which freely circulates between the shaft and bushing. The liquid passes through 6, through the impeller 5 and into the casing 4 where it is conducted between an outer and inner wall by the guide or diffusion vanes 21, into the discharge column 26. It leaves the column through the head 38 which is suitably supported at the ground level. The shaft whose exit from 38 is sealed by a suitable gland 32, is supported in a suitable radial and thrust bearing 34. The pulley 33 can be replaced with a flexible coupling suitable for direction connection to a motor, turbine, etc., not shown.

The liquid is prevented from returning along the outside of the impeller by a seal piece 18 preferably of rubber and lubricated by the liquid forced through the grooves 27. In the construction as of Fig. II the seal piece 18 is fastened to and carried by a flexible diaphragm 17 fastened to the side plate 6. When the pump is operating, an unbalanced pressure on the seal piece forces it against the impeller face. In the construction of Fig. V the seal piece 18 is fastened to and carried by a flexible diaphragm 17′ which is held between 6 and 4 and serves as a gasket. Here the edge of 17′ and the piece 18 are forced against the impeller face by pressure exerted in a hollow expansible ring 31 connected by a tube 39 and corresponding passages 36 in 6 and 4 to a screen or strainer 35 conveniently located at a point in the discharge passage where the kinetic energy of the liquid has largely been converted to pressure and there is least possibility of accumulated sand or grit.

The spider 29 is screwed into a column coupling 30 and held in place by pieces of the column 26 also screwed into the coupling. The hub of the spider forms a bearing or control for the shaft 1. Lubrication of this bearing is accomplished by free circulation of the liquid.

The shaft is flexibe and the hearings in 4 and 6 are widely spaced so that the impeller 5 and the liquid contained in it may revolve about a varying center of mass rather than the geometrical center of construction. To allow for this so called “setting” the sealing joint is made in a plane practically perpendicular to the axis of the shaft so that the contact surface of the seal is practically motionless and the small lateral or radial movement during one revolution of points of the impeller face relative the seal surface tends to better distribute the lubricant between the surfaces. The coefficient of friction for water lubricated rubber against metal is low—probably as low as that of a good, well oil-lubricated bearing. Sand and grit have no had effect upon such surfaces. Therefore the friction of the seal will be small and its life long.

In the column, shaft l has bearings and controls as required between the bearings in 4 and head 38. A one-stage pump only has been illustrated, but the invention is not changed if parts 26 and 25 are replaced with the lower part of another 6 with its bearing omitted and a pump of two or more stages is constructed. Also the seal 18 etc., have been shown in the drawings on only one side of the impeller. The invention is not changed if the seal is fitted on both sides of the impeller, such a construction being advisable under some conditions to lessen or remove thrust in the direction of the axis of the shaft.

A vertical deep well pump has been used to illustrate but the invention is not changed if it is applied to a horizontal single or double suction pump as are well known to those well versed in the art. 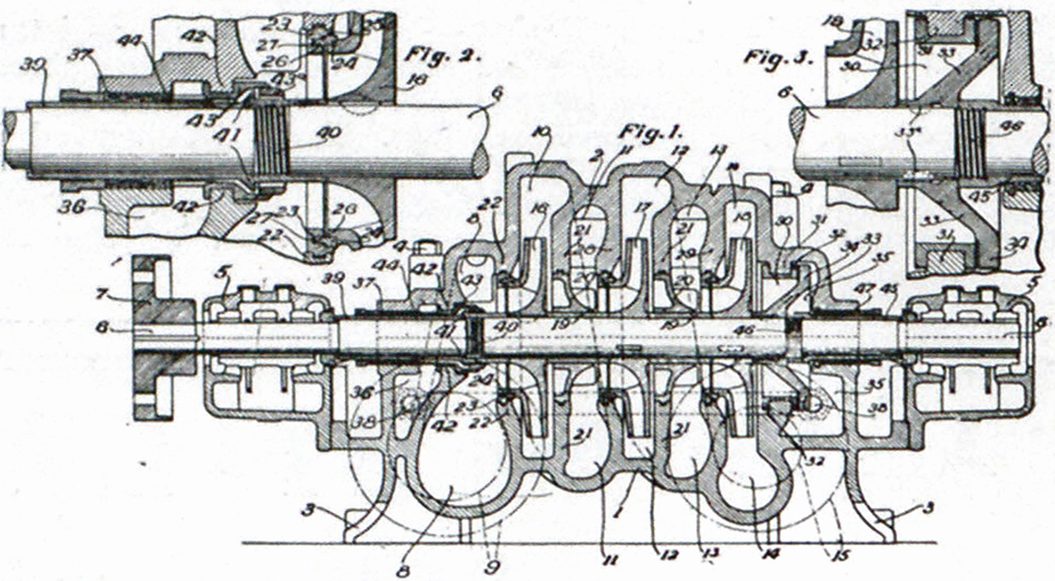 An improvement in centrifugal pumps consists in slightly overbalancing the thrust on the impellers which tends to move the supporting shaft and the impellers toward the intake side of the pump by a thrust in the opposite direction on the balancing disc carried by the shaft at the discharge end of the pump and subject to the high pressure water at that point. In accomplishing this, means are provided for causing the excess pressure on the balancing disc in one direction to be balanced by counter pressure, this counter pressure being controlled by the movement of the impeller shaft, with the result that the latter will be nicely balanced and will be held practically in a neutral position between the counter-balancing thrusts, thus relieving the shaft and the thrust disc of undue lateral pressure.

The counterbalancing water is returned to the intake or suction chamber along the impeller shaft co axially therewith and in a stream parallel with the main suction water flow. This eliminates shocks and prevents vacuum disturbances. This inflowing water has an ejector effect and increases the water flow. The ejector action results in a part regeneration of the balance water energy.

TWO DETROIT FIREMEN LOST IN ROUND OF MULTIPLE ALARM FIRES