The attendance at the February 11, 1919, meeting of the New England Water Works Association was as follows:

Builders’ Iron Foundry, by A. B. Coulters and F. N. Connct.

The New Jersey State Flighway Commission has sent out notices to the various boroughs affected that all sewer and other connections that necessitate the opening of streets, must be made before the highway is laid in their limits. The communication states that no permission to open the streets will be given within a period of five years after the paving, as the work is too expensive to be torn up shortly after its installation. The owners of property abutting on streets where the highway will be laid are therefore advised to have connections with all public utilities made at this time, whether they intend immediate building or not. 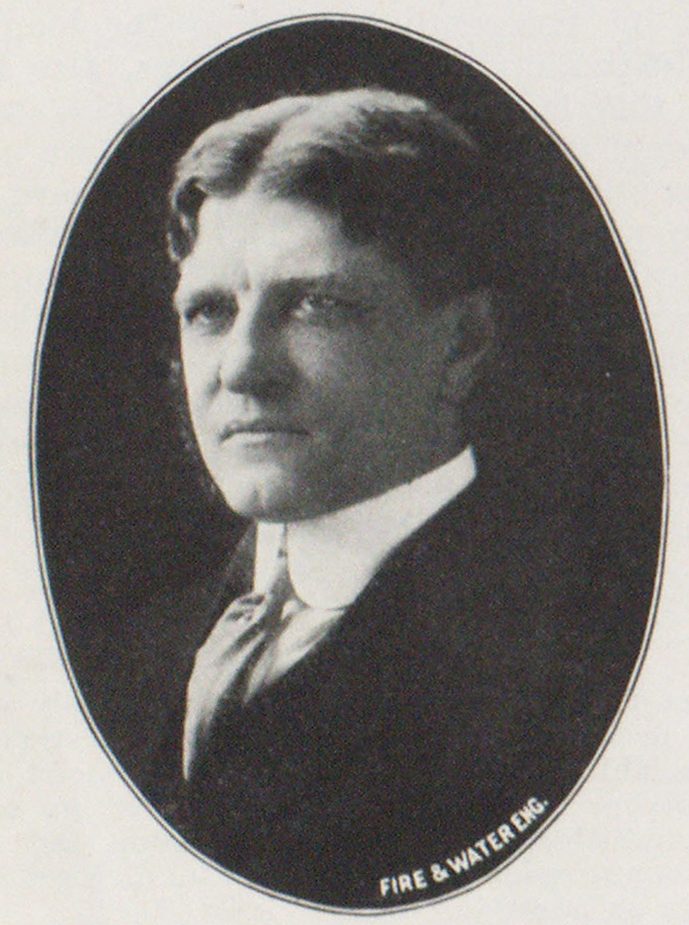 THE annual meeting of the New England Water Works Association was held at the Hotel Brunswick, Copley Square, Boston, on Wednesday, January 14, 1920.

As usual the executive committee met at the association’s headquarters at 11 a. m. The meeting proper commenced with luncheon served at one o’clock at Hotel Brunswick, at the conclusion of which about two o’clock the convention was called to order by the President, Samuel E. Killam, who called for the reports of the committees as follows:

Reports of the Committees

Committee on “Standards of Purity for Water”—Mayor Tolman, chairman. Report of progress.

“To Consider Collections and Standardization of Rainfall and Runoff Measurements”—William T. Barnes. Report of progress.

“Revision of Constitution and By-Laws”—Henry V. Macksey. Report was held over to ascertain the financial status of the association.

“Standard Specifications for Cast Iron Pipe and Special Castings”— Frank A. McInnes. Made no report owing to war conditions.

“Standard Specifications for Fire Hydrants”—H. O. Lacount. Report was not read as the manufacturers had not supplied complete data.

“Leakage of Pipe Joints”—Frank A. Barbour. Report of progress.

“Proposed Standard Schedule for Grading Cities and Towns of United States with Reference to their Fire Defenses and Physical Conditions”—Frank A. Mclnnes. Still getting data, report not ready.

“Extension of Mains”—Caleb M. Saville. No meeting so far.

“National Department of Public Works”—Henry V. Macksey. As Leonard Metcalf was at meeting in Washington, D. C., report not read; committee was discharged.

In the matter of the Committee on “Standard Specifications for Water Meters,” of which Charles W. Sher-

man is chairman, the committee was continued until the next meeting, for the reason that a similar committee had been formed in the American Water Works Association. It was proposed to hold a joint meeting so as to arrive at standard specifications in both associations and avoid trouble that arose in the case of cast iron pipe where each association adopted standards causing considerable confusion. The two committees will get together and present reports later.

In the report of the secretary, Willard Kent, it was shown that while in January, 1919, there had been a membership of 905, at present the total membership amounted to 899, divided into twelve honorary, 810 active and 77 associate members. This shows a net loss of six.

This loss includes one honorary member, eight active members died, thirty-three withdrawals and eighteen dropped from roll. Against this there were forty-eight new members and four re-instated.

The treasurer in his report made a strong appeal to the association to work hard for the increase of membership. He especially emphasized the necessity for the associate members to endeavor to bring in new additions to the roll, and showed that in order to successfully publish the Journal without financial loss to the association membership must be substantially increased.

The editor in his report showed that the Journal had a circulation of 899, with 80 subscriptions and 23 on the exchange list. This showed a loss of eight over 1918. The Journal is published at a cost of $2,600, which left a considerable deficit over the receipts. The editor also made a strong appeal for all to work together for the increase in membership.

Willard Kent, the retiring secretary, who has served for twenty years in that capacity and who is also past president of the association, was unanimously made an honorary member.

The retiring president, Samuel E. Killam, then made his annual address, which was substantially as follows:

The association has added another page to its history of achievements through the work of its officers, committees and members, in the advancement and exchange of knowledge relating to the construction and management of water supplies.

Many of you who have been attending these meetings for many years will recall the days when the membership was made up chiefly of superintendents of water works, men who had been raised from the ranks. They came to these meetings in order to learn how to solve particular problems in which others had had experience, and in return they were willing to relate their successes or failures. Time has changed these conditions. The old line rank and file water works man is seldom seen at the meetings to-day, and if perchance he does attend he quietly slips into one of the rear seats and never a word comes from him. Is it because our papers have been too technical? I believe that, while the older members deprecate the fact that we do not have as many papers read to-day by superintendents of water works, yet they feel that the times have changed from the problem, which in the past was one of distribution, as there was plenty of good water in the earlier days, to one of quality as well as quantity. I believe that the superintendents feel much indebted to the highly trained men who have specialized in this line of work for the technical help that they have received through papers and committee work.

The association has always been noted for the excellent work of its special committees and the growth in inuence and ability to benefit its members has been largely due to the reports and conclusions of these committees. In order to continue this successful work the cordial co-operation and assistance of the general membership of the association is necessary.

Our association will grow according to the worth it is to the individual. Comparatively few people in any community appreciate the water works officials and the many difficulties attending the successful management of their works. If we can convince these officials, who are not members, that this association does appreciate their services and is willing to share their burdens, I believe that there will be a decided increase in membership. We need new members and you have adopted the recommendation of your Budget Committee to make a drive. An intensive drive will cost money. If we are to continue to grow and maintain our standing among the technical societies of our country we must make individual efforts.

Let us start the new year with the slogan, “Let every member get a member.” Drives are all right. They get quick results, but I believe that the individual effort of each member is most desirable in order to increase our membership and still be healthy. The responsibility rests upon us. Will we not accept it and render the service?

The annual convention was held at Albany, New York, and was attended by 396 members and guests. The exhibits were interesting and instructive and very artistically arranged. The literary program was excellent and the meetings were well attended. The entertainments were very enjoyable and called forth many favorable comments. This last feature was handled by a committee from the Water Works Manufacturers’ Association, who have been seeking this privilege for ten years. The idea of allowing a man to spend his own money proved advantageous to the association. I trust that future conventions may gain in size and influence.

I thoroughly appreciate the support and consideration of the officers during the past year, and thank the members for the courtesy and kindness they have all manifested toward me during my year as president, and I congratulate the association on the loyalty of its members.

Let us ever bear in mind that we live in deeds, not in years, and that the New England Water Works Association can move onward and upward only by the hearty co-operation of every member.

Election of Officers for the Ensuing Year

The next order of business was the election of officers for the ensuing year. The ticket formulated by the nominating committee was practically unanimously elected as follows:

The newly elected president, Henry Vincent Macksey, was born in 1860. He graduated in 1886 from the Rensselaer Polytechnic Institute and became surveyor with Pencoyd Iron Works. From there he was appointed assistant engineer of the B. & M. Railway in Nebraska. The next year he became resident engineer of the Hudson River Connecting Railroad. In 1889 he was made division engineer of the Penn., Poughkeepsie and Boston Railroads, both of the above positions being on the Poughkeepsie Bridge route. In 1890 he was made resident engineer of the Dunderberg Spiral Railway, and in the same year and until 1896 he was locating and division engineer on construction of the Jamaica, B. W. I., Railways. In 1896 Mr. Macksey was appointed resident engineer of the Massachusetts Highway Commission, and in 1897 was made assistant engineer of the City of Boston and placed in charge of the meter service of water works of that city. Besides this he has engaged in civil engineering in various parts of the country, including New York, Boston, Albany, Altoona, etc., for several years. He is now superintendent of Public Works of Woburn, Massachusetts.

Fire and Water Engineering, by C. B. Hayward.

Inspiration vs. Intimidation: Which Type of Leader Will You Be?