A further object is to provide improved means for controlling or governing the speed of winding up and unwinding of the drum, and to provide in this connection one means whereby the speed of unwinding may be controlled and another means whereby the speed of winding up may be controlled. The illustration shows a vertical sectional view through the casing of a fire escape and through the controllers. In it 10 designates a rectangular frame or box which may be attached to a window sill or disposed adjacent to the window or in any other position oil a building where a fire escape may be necessary. Mounted in this frame is a rotatable shaft 11 which carries upon it a drum 12 around which a steel band 13 is disposed. To the lower end of this band 13 is attached a chain 14, to which a like belt is fastened, this belt being adapted to pass around the waist of the user.

It will be seen that this controller causes an even descent of the person attached to the band 13 and this controller is preferably so arranged that this descent is at a speed about equal to that of a person walking downstairs so that the person descending will not strike the ground with any such force as will tend to injure him.

When he has reached the ground, the person who has descended unhooks the belt from around his waist and then the spring 17 acts to rewind the drum 12.

In use. the metal frame or box 10 within which the mechanism is mounted or within which it is enclosed is placed in any window or door and at any desired height, depending upon the length of the metal belt 13 and the spring 17. When it is desired to use the fire escape, a like belt is passed around the waist of the person, as before remarked, and fastened to the metal belt. The speed at which the person is lowered is regulated by the governor 14, as before stated, and is about equal to the rate at which a person can walk down a stairway. The belt is unhooked on reaching the ground and the apparatus will return automatically to its initial position, the return speed being also governed by the governor mechanism enclosed within the drum 29 to thus prevent jamming.

Boca Raton, Fla., to Have Water System—A plan for a water works system for Boca Raton, Fla., is being worked out by the engineers of the Mizner Development Corporation. An ordinance was passed which provided for the annexation of additional territory. 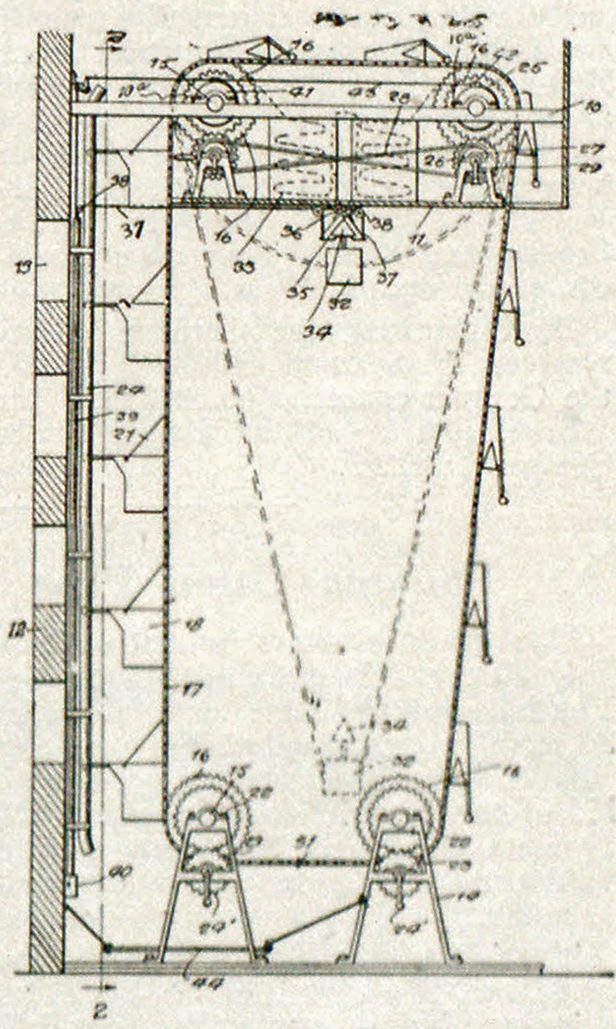 In carrying cut this invention there is provided an upper frame structure 10 having a platform 11, and this frame structure is securely fixed to the building, above one row of the window openings, the building itself being indicated at 12, and such window openings at 13. Beneath the upper frame structure a lower frame structure 14 is provided which may either he constructed on the sidewalk or beneath the sidewalk according to the specific requirements of the case. Kaeh of these frames carries a pair of parallel spaced shafts 15 on which are supported sorocket wheels 16, there being a pair of these sprocket wheels on each shaft so that a pair of chains 17 to which arc connected buckets 18 of collapsible nature can be passed around these sprockets, as shown. Each of these buckets consists of a frame 19 and a bag or bottom of flexible material as shown at 20 so that the buckets can collapse while ascending. The frames 19 are supported by cords or chains 21 so that in descending they occupy a horizontal position. When not in use, the chains are uncoupled, removed from the lower sprockets 16 and connected to the counterweight. Then by throwing in the clutch and rotating cne of the cranks 29, the counterweight will be drawn up and the chains will be fed inward toward the center of the platform from each tipper sprocket 16. suitable boxes or receptacles 33 being provided for the reception of these chains, and the buckets 18, as shown in dotted lines.

In order to allow for the passage of the buckets past cornices and other projections on the building, there is hinged adjacent the front edge of each bucket an extension platform 45 having stops 46 to hold the >ame horizontal when the buckets are in distended position. However, these stops arc so arranged that the platforms can lift in order to allow them to pass cornices and like projections. Thus the space between the building and the bucket is normally kept filled so as to prevent people from dropping through these spaces.

In use. it is simply necessary for the occupants of the building to pass out of the windows into the buckets as they move downwards past the windows whereupon they will be safely conveyed to the receiving platform 44.